Why Deutsche Can’t Bank on Germany in Fight with U.S. 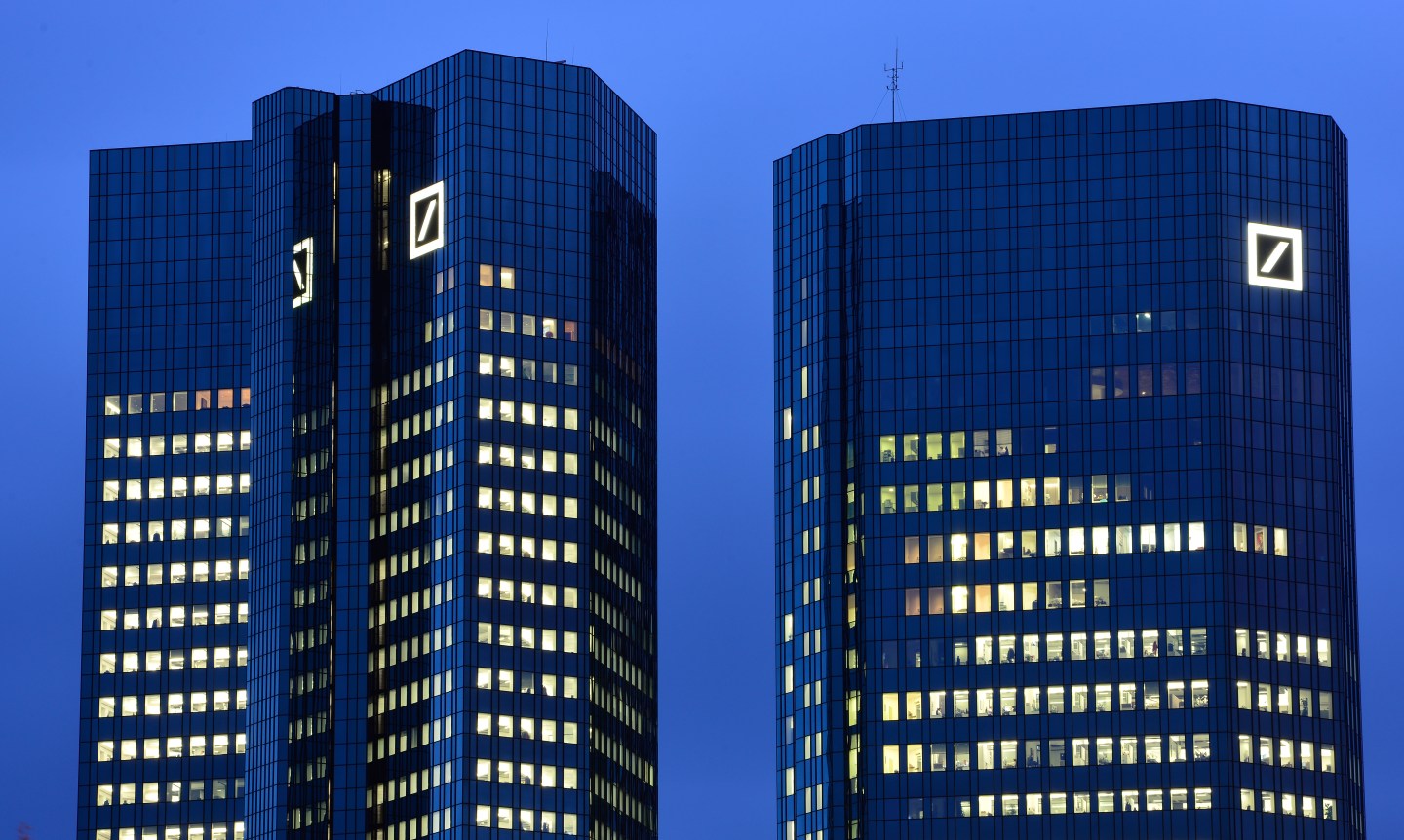 FRANKFURT AM MAIN, GERMANY - JANUARY 09: The Deutsche Bank AG headquarters stands illuminated in the twilight on January 09, 2014 in Frankfurt am Main, Germany. Many of Germany's biggest banks will be announcing their financial results for 2013 in the coming weeks. (Photo by Thomas Lohnes/Getty Images)
Photograph by Thomas Lohnes — Getty Images

“Zu gross, um Pleite zu gehen” doesn’t have quite the same ring as “Too Big to Fail”, but, eight years on, the phrase might finally be catching on in Germany.

That’s because this time it appears to be Germany’s biggest bank, Deutsche Bank AG, that is caught in the vortex potential insolvency and moral hazard. Deutsche’s shares fell nearly 7% Monday after a weekend magazine report that Chancellor Angela Merkel’s government wouldn’t bail it out, even if the bank needed to raise money to settle the Department of Justice’s claims related to it’s sales of mortgage-backed securities.

Cue the start of the grimly binary round of ‘will-they-won’t-they?’ speculation on whether, if push comes to shove, Berlin would let Deutsche fail.

The short answer is no, but that is no reason to be complacent about the outlook for Deutsche Bank’s shares.

Merkel has already experienced one financial crisis and knows that a disorderly bankruptcy is the worst of all possible outcomes. There will be no German Lehman.

But there are plenty of reasons to pretend otherwise. First, the political cost of bailing out Deutsche with taxpayers’ money, less than a year before federal elections, would be enormous. Merkel’s CDU party has just been comprehensively embarrassed twice in local elections by the populist right-wing Alternativ fuer Deutschland. As Christian Odendahl, an economist with the Center for European Reform in London, points out, a bailout with taxpayers’ money would give AfD yet another stick with which to beat her, on top of her bailouts of supposedly feckless Mediterranean types and her handling of the migrant crisis.

Nor should it be imagined that the average German breast stirs with patriotic pride at the thought of the country’s only bank of global importance. Germany loves engineers. It doesn’t love financiers. It certainly doesn’t love the kind of high-leverage, high-pressure, high-return model of banking that Deutsche pursued (all accompanied by Josef Ackermann’s Cheshire Cat grin and the hard charging of his investment banking head, Anshu Jain) until it ran into a wall of literally thousands of lawsuits relating to market manipulation, allegedly cheating customers in all sorts of products from interest-rate derivatives to mortgage-backed securities. Whilst it might once have enjoyed all the benefits and prestige of being a national champion, Deutsche is now a thoroughly toxic brand in its home market.

Secondly, by telling the DoJ that it can’t count on the German taxpayer to meet its demands, Merkel may persuade it to moderate them. Deutsche said a couple of weeks ago that it expected to settle for a much lower sum (it had accounted for around 3 billion euros). That may be too optimistic, but $14 billion is more than any U.S. institute had to pay to settle similar claims.

So how to avoid the worst case for the world financial system, while saving political face at home? The first part of the solution is to stall for time. What is impossible for the next year may be slightly less impossible after the elections, assuming Merkel and/or her party are still in power. The second is to impose up-front costs on Deutsche’s current generation of shareholders (hence today’s share price reaction and another sharp drop in its ‘contingent convertible bonds’, which convert into equity if its capital ratio falls below a certain threshold). This was the cornerstone of new European legislation on which Merkel insisted in the wake of the crisis, which she sold as insurance for German taxpayers against the follies of other countries’ banks.

Once sufficient losses are forced on Deutsche’s shareholders, the task of providing ‘temporary’ assistance to help unwind the rest of the bank would be easier. It would also be necessary: Deutsche is one of the most interconnected banks of all, especially in global markets for bonds, currencies and swaps.

The bits of Deutsche that matter specifically to the German economy (like a 150 billion euro book of loans to German homeowners, consumers and small businesses), could be transferred to, for example, Commerzbank, in which the government still owns 17% as a result of the 2008 bailouts.

Intriguingly, Commerzbank and Deutsche were rumored earlier this summer to have held tentative talks on a merger. That would (quite coincidentally) give the government a vested interest in finding a solution beneficial to Commerzbank.

But the biggest beneficiaries of any rescue that involved taxpayers’ money would be found elsewhere. A bailout would undercut German moral authority as Berlin tries to stop Italy’s plans to recapitalize its banks through higher government borrowing. Matteo Renzi would almost certainly be able to push through at least a version of his current plan, putting off that particular reckoning for a few more years.