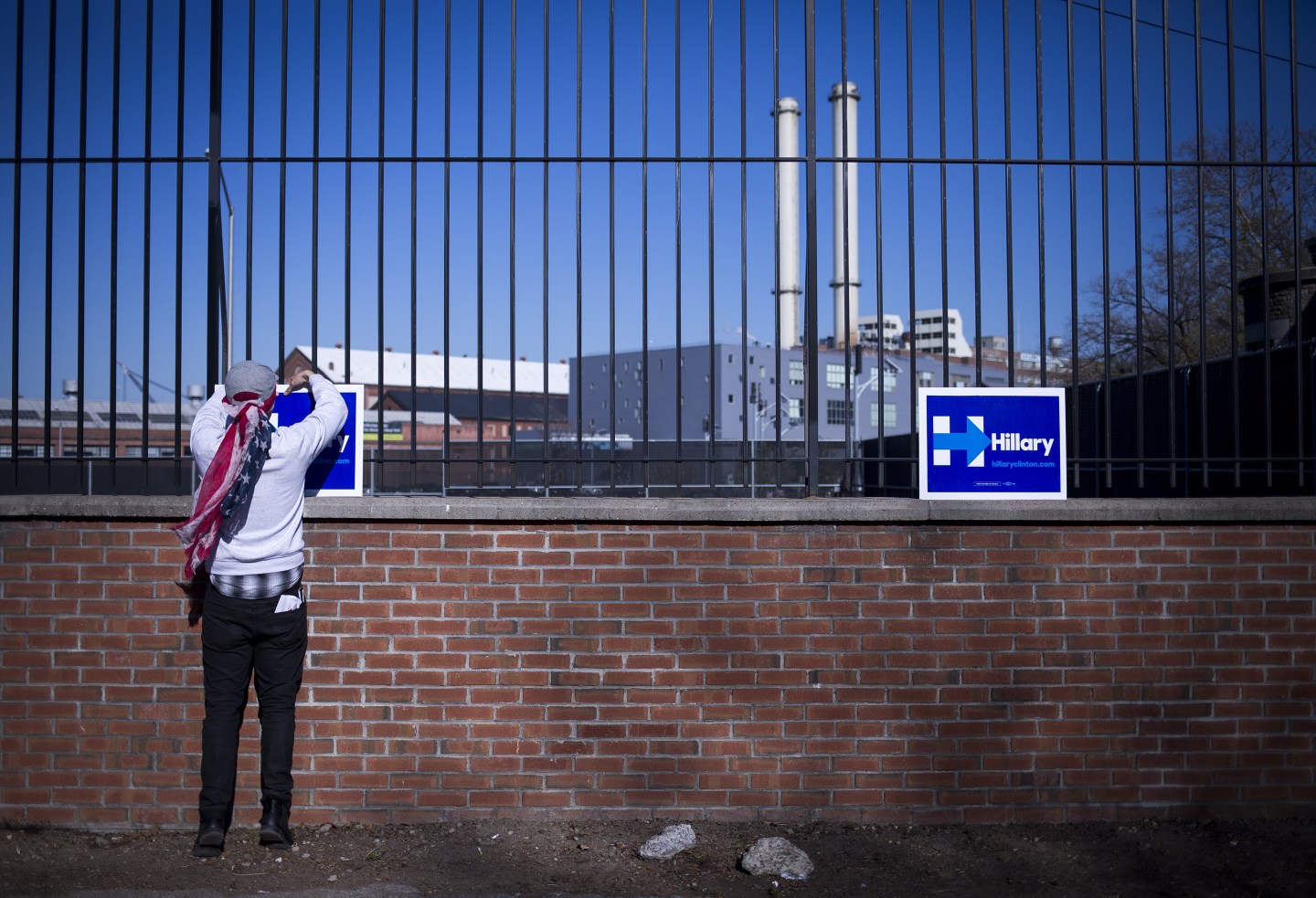 A volunteer tapes a campaign sign for Hillary Clinton, former Secretary of State and 2016 Democratic presidential candidate, not pictured, outside the Brooklyn Navy Yard before the start of the Democratic presidential candidate debate in the Brooklyn borough of New York, U.S., on Thursday, April 14, 2016. While Bernie Sanders and Clinton have tussled over energy policy, immigration, and gun control, it's the back-and-forth over Wall Street that has been most persistent through weeks of campaigning in the state.
Photograph by John Taggart—Bloomberg via Getty Images

One would expect voters from the heavily Democratic Brooklyn neighborhood of Cobble Hill to pick presidential candidate Hillary Clinton in the Nov. 8 general election. Just don’t expect them to advertise it.

Like lawns and windowsills in liberal pockets across the country, much of the neighborhood is bereft of pro-Clinton signage in the final weeks before the election. It’s a stark contrast to the 2012 and 2008 campaigns, when President Barack Obama whipped up a frenzy of support from Democrats and his signature “Hope” and “Forward” signs were ubiquitous.

The scarcity of lawn and window signs is an indication of the Democratic nominee’s struggle to generate enthusiasm among left-leaning voters, a challenge that’s borne out in polling data, and could potentially haunt her if voters fail to turn out on election day.

But Americans of all political stripes have been more critical of Clinton than they were of Obama when he was running for his second term four years ago, according to the daily tracking poll.

Among Democrats, 78 percent say they have a favorable view of Clinton, lower than the 89 percent favorability rating Obama had at this point in the race in 2012. Clinton’s favorability drops to 28 percent among independents versus Obama’s 47 percent.

Nancy Kimmel Viola, a 63-year-old social worker who lives about a mile away from Clinton’s campaign headquarters in Brooklyn, keeps a “Bernie 2016” sticker taped to the front door of her Carroll Gardens home, a vestige of her support for the unsuccessful bid of Sen. Bernie Sanders. While she plans to vote for Clinton, she confesses that her “heart’s not in it.”

“I have to vote for her.” Viola said. “Having Trump in there is too scary.”

In Denver, residents in the Democratic stronghold of Park Hill posted many yard signs over a local zoning issue, but few for the presidential race.

“Most of us around here will vote Democratic, we always do, but we’re not overly enthusiastic for Clinton,” said resident Pablo Marron. “But we are united in our opposition to Trump.”

In the heavily Democratic Denver suburb of Northglenn, banners for local office-seekers littered a major roadway, but there were no accompanying Clinton signs. In the affluent liberal Washington DC suburb of Chevy Chase, Maryland, signs for the Democratic nominee appeared only roughly once every 10 blocks.

The lack of enthusiasm isn’t just hitting the Clinton campaign. Americans from both major parties say they are generally less interested in voting this year than they were in 2012, according to the Reuters/Ipsos opinion poll, which compared results gathered during the first 20 days of September with the same period of 2012.

The Clinton campaign did not respond to emailed requests for comment.

Clinton’s online store displayed roughly a dozen different signs and banners for sale, ranging from an 11-inch by 17-inch sign, sold at $10 for a pack of two, to a four-foot by six-foot “Hillary for America” banner, which retailed for $100.

Sales data was not immediately available and a request for comment from the store went unanswered.

For some, there is a “hold your nose quality” to this election, said Matthew Dallek, associate professor at George Washington University’s Graduate School of Political Management.

“The lack of signage” in liberal enclaves may indicate, Dallek said, “that there just isn’t this sort of enthusiasm that existed for Obama.”

But there are some blocks that buck the trend.

On a street in Gowanus, Brooklyn, no fewer than four homes bore pro-Clinton signage, including a life-size cutout of the Democratic nominee, which rests in the windowsill of retired lawyer Chris Morrison’s home. The beaming cardboard Clinton prompts many passersby to take pictures, said Morrison, a staunch Clinton supporter.

“You don’t see as much signage this time around. In this neighborhood I don’t get so concerned (because everyone is) more or less on the same page,” said Morrison, 66.

“I worry when I go to some other places.”