Why Everybody Loved Arnold Palmer 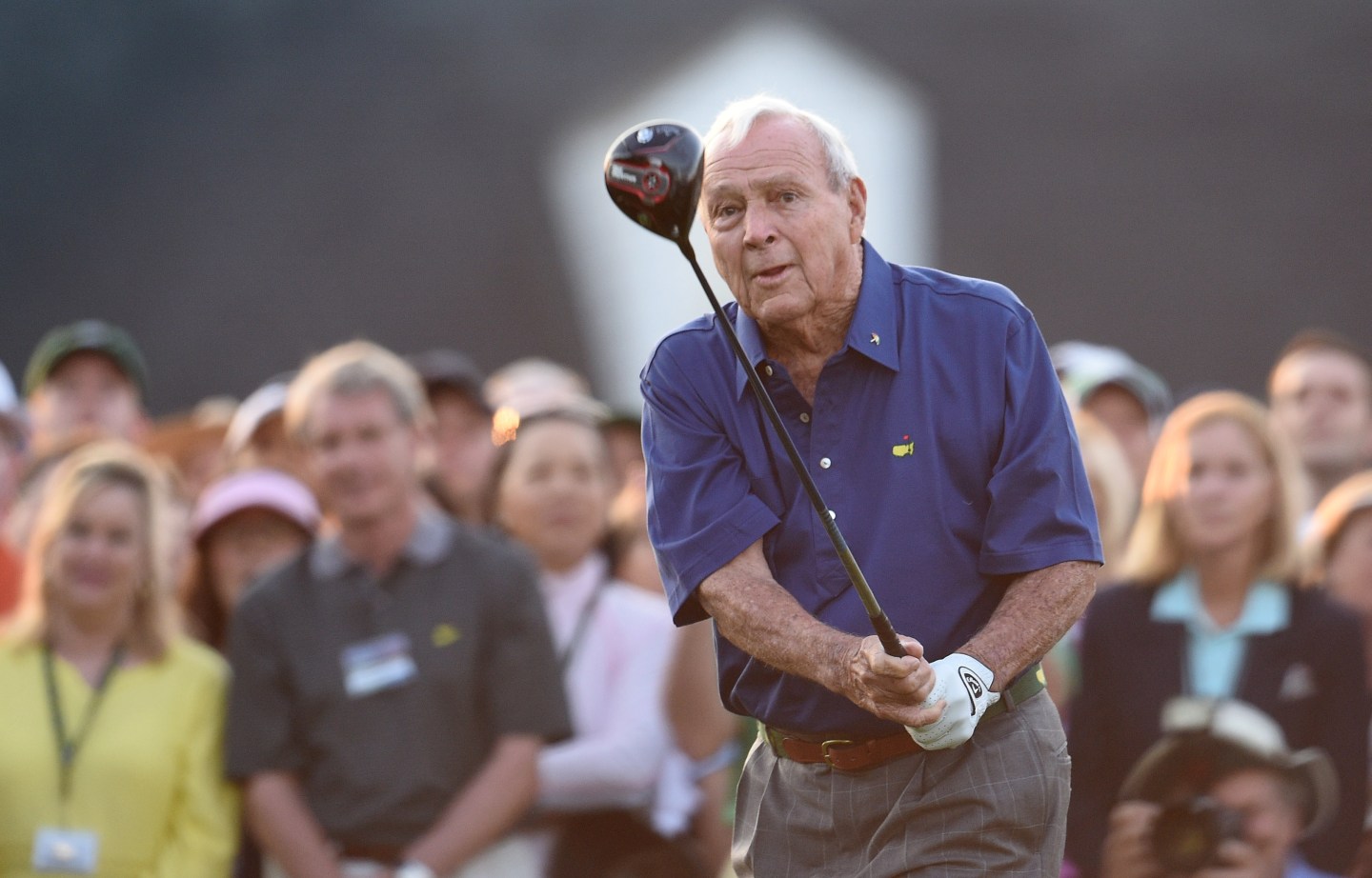 Some golfers have clothing named after them and some champions have clubs and even golf courses dedicated in their honor.

Golfing great Arnold Palmer, who died at the age of 87 on Sunday, was very different. He had his own army of followers.

‘Arnie’s Army’ started marching in the late 1950s and continued throughout the 1960s and early 1970s in homage to one of the greatest players ever to pick up a club and surely the most charismatic.

A seven-times major champion, Palmer had no peers as a fan favorite and always went to great lengths to ensure that every person waiting in line ended up with a cherished autograph, an approach that even today’s generation of players tries to live up to.

With his swashbuckling style, prodigious length off the tee, bold putting and affection for the galleries, he did more than any other player to popularize the game with the advent of television.

Spaniard Seve Ballesteros may have later matched him for flamboyance and American Tiger Woods in the late 1990s and early 2000s certainly eclipsed him for sustained shot-making brilliance, but no one has ever trod the fairways with such a fanatical following.

At its height, ‘Arnie’s Army’ numbered thousands and provided the ultimate inspiration to Palmer as he stomped to 92 professional tournament wins in a career that lasted nearly 50 years.

His fan base began as a dedicated band of men from a nearby military base, hence the nickname ‘Army’, and they decided to cheer him on at the year’s first major, the Masters at Augusta National.

However, those numbers soon swelled to include any man, woman or child who happened to be drawn to Palmer’s highly personable, devil-may-care, wisecracking personality.

Palmer appeared to approach golf tournaments in his pomp the way John Wayne gunned down villains in his films: flinty-eyed, uncompromising but deadly effective.

His swing was never a thing of beauty—more of an agricultural swipe than the elegant arc of a Sam Snead or an Ernie Els—but it would always get the job done.

Palmer could hit the ball further than almost all his rivals in the 1960s—Jack Nicklaus was the exception—and he could recover from tricky positions off the fairway better than any of them.

To cap it all, he would sink putts all day, usually by running the ball with conviction in the direction of the hole, and his nerve was made of tungsten steel.

As Palmer described it at St Andrews in 1992 when his best days were long behind him: “At my height, I felt I could get the ball to go where I wanted almost by force of will. I’d see the shot in my mind’s eye and then make it happen with my club.”

He was also famous for being an inspiration to “blue-collar” workers in the United States.

While his predecessors were mostly drawn from the cream of American society—Bobby Jones was the ultimate example—Arnie was always a man of the people, a working man’s hero who would happily while away post-round hours in the bar with his followers.

From the beginning to the mid-1960s, he was unquestionably the man to beat on any golf course against any field and one of the most recognizable figures in any sporting field—or walk of life.

Palmer was born on Sept. 10, 1929 in Latrobe, a small industrial town in western Pennsylvania where his father was both resident professional and superintendent of the local golf course.

By the age of four, under his father’s supervision, Palmer was already swinging a cut-down club. By the time he reached his early teens, he was showing considerable potential and beating the older caddies there.

He continued his development, rising at dawn to practise on the deserted course and then returning after schoolwork at twilight before finishing in near darkness.

By 17 he was already a proven champion on the amateur circuit and he headed the golf team at his college, Wake Forest University, before quitting after one of his best friends was killed in a car crash.

Three years followed as a coast guard before Palmer’s interest in golf was rekindled and victory in the U.S. Amateur championship in 1954 launched him into the paid ranks.

He married his beloved wife Winnie and together they travelled the world together as he made his fame and fortune after joining the U.S. Tour in 1955.

Palmer had struggled too long to waste his spoils.

Early in the decade, he linked up with emerging entrepreneur Mark McCormack and together they launched a massive business empire which encapsulated course design, car and plane service firms, sports goods and golf tuition aids among others.

Even when he had long since stopped being a threat to succeeding generations of golfers on the course, he out-earned all but the very cream of them off it.

He also became owner of his local club in Latrobe and another, grander layout in Orlando—the Bay Hill Club—which became host of one of the U.S. Tour’s top tournaments.

Palmer fronted a string of charities too and became a spokesman for the battle against cancer after contracting the disease himself and losing his wife to it.

It added up to an astonishingly hectic life which he maintained well into his 70s, often taking the controls of his own Cessna jet for visits to more than 200 courses he helped design around the world or other business ventures.

His legacy, though, will be as a player of matchless charisma and verve who helped make his sport enthralling again at a time when his predecessors Hogan, Snead and Nelson were fading and the public were drifting away.

As Jack Nicklaus said: “You can’t take away what Tiger Woods has done for the game—but Arnie made it what it is today.”