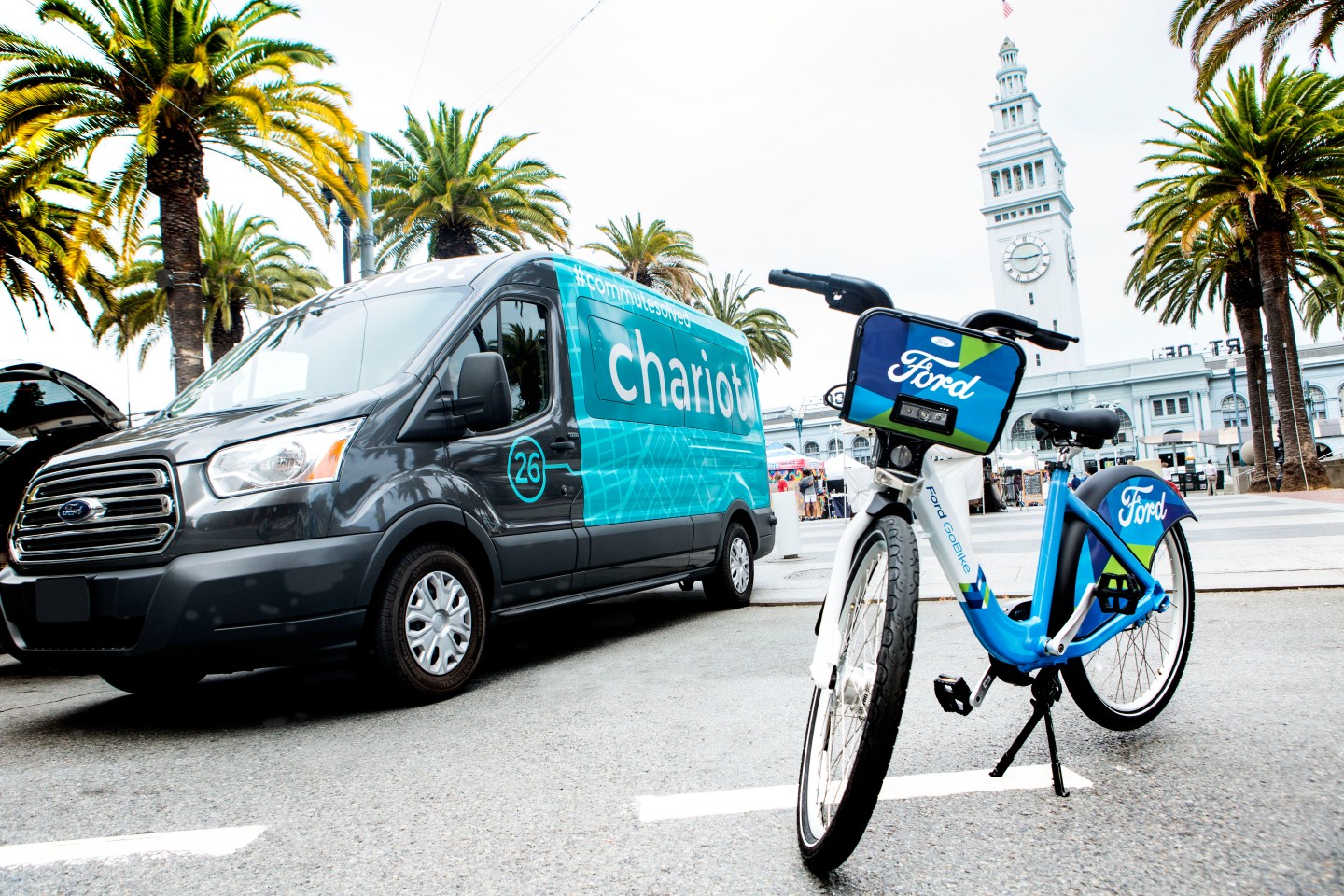 Courtesy of Ford/Photo by Tommy Lau

The 113-year-old automaker announced Friday three new ventures in the San Francisco Bay Area, including its first bike-sharing program and a dynamic shuttle service that uses software algorithms to find the best routes and determine rates.

San Francisco is just the beginning. Ford CEO Mark Fields tells Fortune that the company plans to take its mobility ventures—essentially businesses that don’t involve making and selling cars—to other markets, including overseas. In short, Ford is making a global play on solving urban congestion.

A decade ago, investors and industry experts might have cringed at Ford’s investment in any pursuit beyond building cars—and certainly not ones that encourage riding bicycles. But the rise in demand for ride-sharing services and the crippling economic effects that congestion is having on cities has forced automakers to think differently. Some are slightly tweaking their traditional businesses by rolling out electric vehicles.

In an interview on Friday morning, Fields explains that simply switching propulsion systems from gas to electric doesn’t actually solve the problem.

“Cities are growing and it’s a real challenge to get from one side to the other now,” says Fields. “Cities are looking for solutions and we want to be part of the solution. We’re a natural player for cities to turn to.”

Ford announced Friday that it’s acquired Chariot, a San Francisco-based shuttle service startup that used crowdsourcing to determine where people needed rides. Ford did not disclose the acquisition price. The company plans to expand this shuttle in the city and to at least five other markets, including one outside the U.S., in the next 18 months.

The shuttles aim to fill the needs that bus and taxi services can’t, and Ford said it will also help reduce traffic congestion. For every one dynamic shuttle that is placed into service during peak travel times, urban congestion could be reduced by up to 25 fewer vehicles, according to a private study for Ford conducted by KPMG.

The automaker is also launching its first Ford GoBike bike-sharing program in San Francisco, which will be operated by Motivate. The Bay Area Bike Share program operated by Motivate technically already exists with about 700 bikes. But as title sponsor, Ford is helping it expand to 7,000 bikes by the end of 2018, the company promised.

Ford has aspirations beyond shuttles and bikes. The company plans to use data collected from the bikes to build an interconnected mobility network that could include real-time data—such as weather conditions, usage patterns and bike availability—to optimize commutes. That same technology could be pushed through a mobile platform to help other kinds of commuters, too.

It’s that systems approach where Ford sees the biggest opportunities.

“No one has really stood back and thought of the city as a system like the electrical grid or the internet,” Fields says. “Modes of transportation need to have a seamless relationship to reduce the pain points on a city.”

Why Ford’s venture into self-driving taxis is a smart move:

That’s where Ford’s other announcement—a new team focused on finding solutions for cities—comes in. The so-called city solutions team will be housed under Ford Mobility LLC, the automaker’s new transportation services unit, a business segment that includes car-sharing and ride-hailing.

The team is already working with cities. Fields, and Jim Hackett, chairman of Ford Mobility LLC, wouldn’t name them. But considering Ford has worked with some U.S. medium-sized cities that participated in the Department of Transportation’s Smart City Challenge, it’s likely that the company is targeting at least one of those urban areas.

The announcements on Friday are the products of Ford’s broader transportation plans announced back in 2015. The company’s mobility strategy involves building cars with Internet connectivity, developing autonomous vehicle technology, and using big data collected from sensors in cars to learn more about how people travel.

In January, Ford expanded on that plan with several new initiatives, including a free mobile app called FordPass that is supposed to serve as a sort of Swiss Army knife for transportation. It helps drivers find and pay for parking, borrow and share vehicles when traveling, and schedule service appointments.

Updated: The story was updated at 6 p.m. ET to clarify that Ford is the title sponsor of the bike-sharing program.