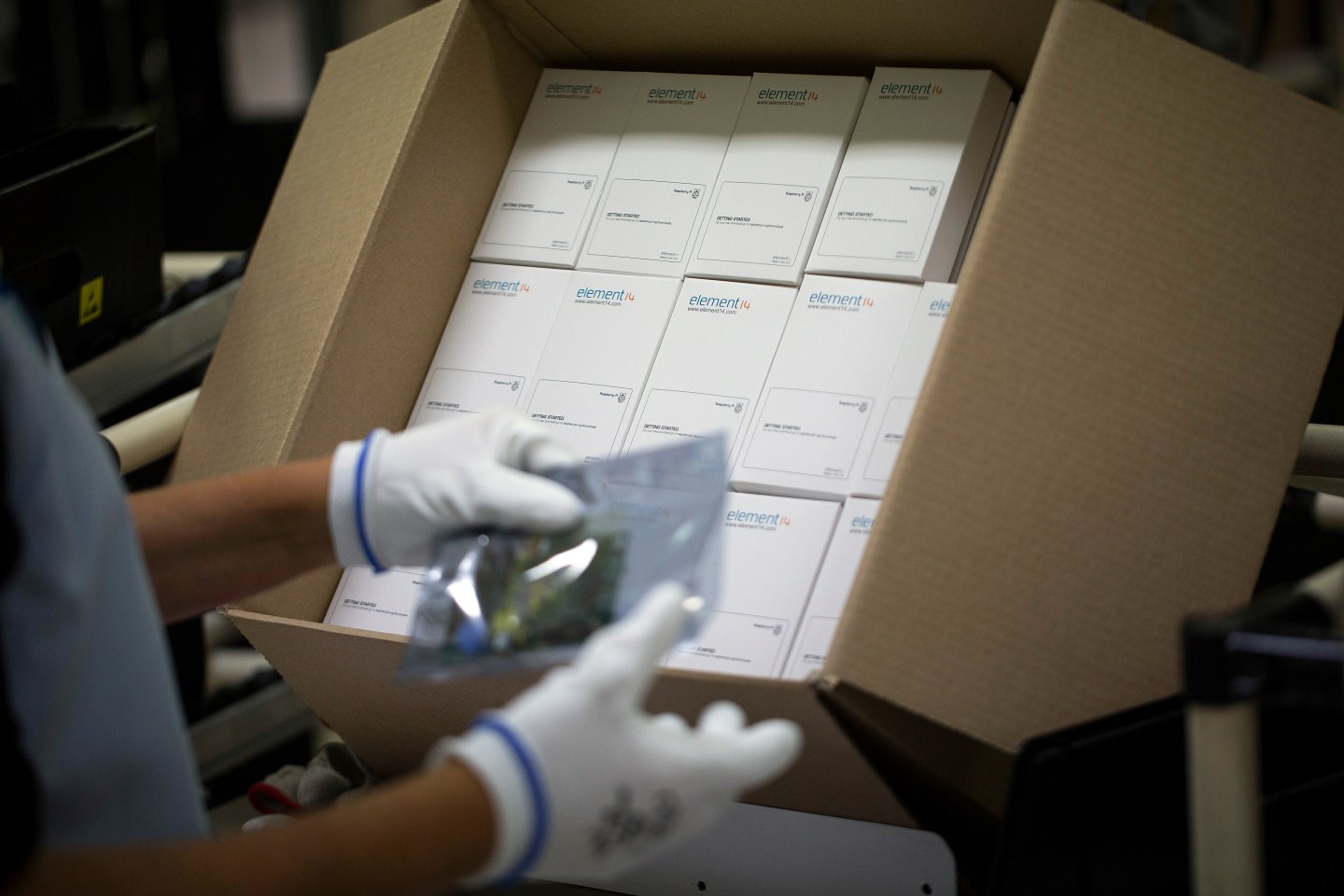 An employee prepares a completed Raspberry Pi single-board computer for distributor Premier Farnell Plc, on the production line at Sony Corp.'s technology centre in Pencoed, U.K., on Monday Dec. 16, 2013. Raspberry Pi, a low-cost computer designed primarily for children, was developed in the computer laboratory of the University of Cambridge. Photographer: Simon Dawson/Bloomberg via Getty Images
Simon Dawson/Bloomberg via Getty Images

The Raspberry Pi is quite a phenomenon in the computing world—a stripped-down computer that doesn’t even come with a case, let alone software, but that costs just $35 and has proven a hit with kids and other tinkerers.

Such a hit, in fact, that the U.K.-based Raspberry Pi Foundation has now sold 10 million of the things.

As Raspberry Pi founder Eben Upton noted in a Thursday blog post, the original idea was just to get more people applying to study computer science at the University of Cambridge.

Of course, at the time it may not have been apparent that the rise of the Raspberry Pi would coincide with—and perhaps even help fuel—the explosion in embedded computing.

Not only are all sorts of regular devices becoming connected to the Internet, but a variety of new device types have appeared, such as drones and wearable computers. Along with platforms such as Arduino and Adafruit, Raspberry Pi computers have proven very useful to startups and hobbyists that want to prototype new ideas in such areas at minimal expense.

The Pi is perfectly usable for a lot of regular people too. Earlier this year, version 3 of the Raspberry Pi finally integrated Wi-Fi and Bluetooth functionality, removing the need to buy extra dongles for wireless connectivity and making it a more viable PC replacement for people’s living rooms.

The device’s success has not just been good for the foundation that’s behind it. It also helped make Premier Farnell, the U.K. firm that distributes about half of the Raspberry Pi units, an attractive takeover target—component firm Avnet said Thursday that U.S. regulators had cleared its $907 million acquisition of the distributor.

For more on Raspberry Pi, watch:

The Raspberry Pi Foundation uses some of the proceeds of sales to fund coding courses for kids and teachers.

“You can imagine how strange it feels to be able to announce that over the last four and a half years we’ve sold a grand total of ten million Raspberry Pis,” Upton wrote. “Thanks to you, we’ve beaten our wildest dreams by three orders of magnitude, and we’re only just getting started.”

To celebrate the 10-million-sold milestone, the foundation announced a £99 ($132) starter kit that comes with some of the add-ons that people tend to buy for the core product—am HDMI cable, a mouse and keyboard, a power supply, an SD card for the free downloadable Linux operating system, and a case. Oh, and an educational book aimed at helping younger users get started.