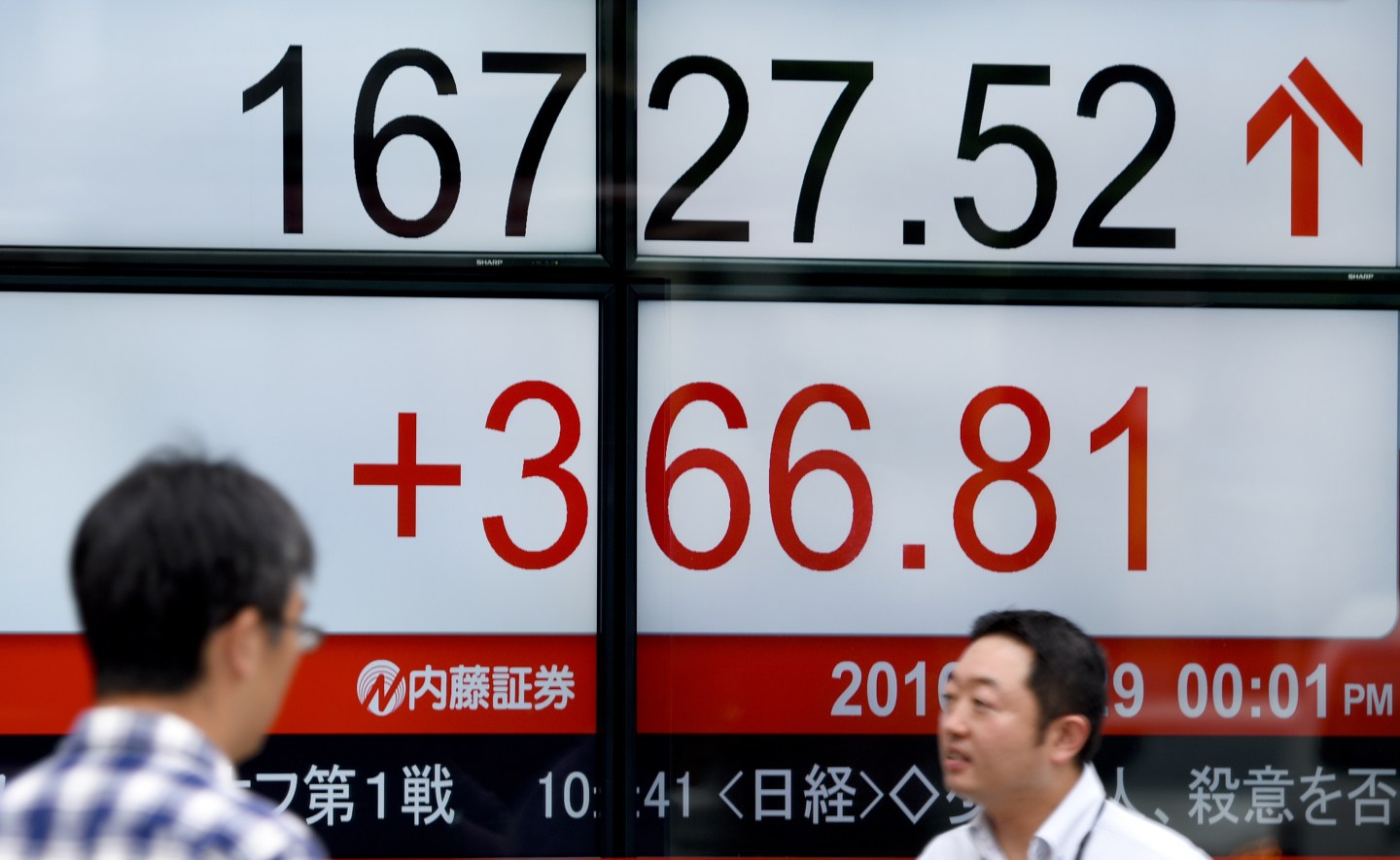 People walk past an electric quotation board flashing the Nikkei key index of the Tokyo Stock Exchange (TSE) in front of a securities company in Tokyo on August 29, 2016. Tokyo stocks rallied after Federal Reserve chief Janet Yellen hinted that US interest rates could rise before the end of the year, sending the yen lower and boosting exporters. / AFP / TORU YAMANAKA (Photo credit should read TORU YAMANAKA/AFP/Getty Images)
TORU YAMANAKA/AFP/Getty Images

Asian stock markets wobbled and the dollar was on the defensive on Friday as investors awaited U.S. job data later in the day which could give clues on whether the Federal Reserve will raise interest rates as soon as this month.

The dollar, which was bullish much of the week, nursed losses after downbeat U.S. manufacturing data tempered recent optimism on the U.S. economy that had revived expectations for a near-term rate hike by the Fed.

A report from the Institute of Supply Management (ISM) on Thursday showed U.S. factory activity contracted for the first time in six months in August, as new orders and production tumbled. The ISM index was 49.4.

See also: Here’s Why Friday’s Jobs Report Will Be Huge for the Markets

MSCI’s broadest index of Asia-Pacific shares outside Japan was barely changed, spending the day swaying in and out of the red.

“Some market participants had bet the Fed may raise U.S. rates as early as this month, but because of the weak ISM data and poor U.S. auto sales, such expectations seemed to have changed,” said Hikaru Sato, a senior technical analyst at Daiwa Securities.

“The U.S. is moving towards tightening, and that direction is the same, but the dollar-yen moves also show that people stepped back from expectations for an imminent hike.”

See also: CITIC and Carlyle Reportedly Partner to Bid for McDonald’s in China

The markets will look to Friday’s non-farm payrolls to see if the Fed can risk raising rates this month or later this year. Economists polled by Reuters expect the U.S. economy to have added about 180,000 jobs in August.

“While the US manufacturing ISM did undershoot expectations by quite a margin, it is worth remembering that the Fed hiked last year when the ISM manufacturing was at 48.0 and had been sub-50 for three consecutive months,” wrote Sharon Zellner, a senior strategist at ANZ.

“There is therefore potential for markets to whipsaw should we see robust U.S. jobs data tonight, going into the U.S. Labor Day holiday weekend.”

For more on the U.S. jobs report, watch Fortune’s video:

The greenback had surged against its peers following a relatively hawkish speech by Fed Chair Janet Yellen last Friday, which raised expectations the U.S. central bank was moving closer to a hike.

Sterling inched up 0.1% to $1.3283 after jumping 1% overnight on purchasing managers’ index (PMI) data showing the British manufacturing sector staged one of its sharpest rebounds on record in August.

The post-Brexit surprise boosted the pound as it could prompt the Bank of England to rethink the need to cut interest rates again if other surveys confirm the trend.

Commodities like oil and gold rebounded on the weaker dollar, which favours non-U.S. buyers of greenback-denominated commodities.

Gold has been dogged by the prospect of higher U.S. interest rates which would diminish the appeal of the non-yielding metal.