Donald Trump Pivots Back on Immigration in Arizona Speech 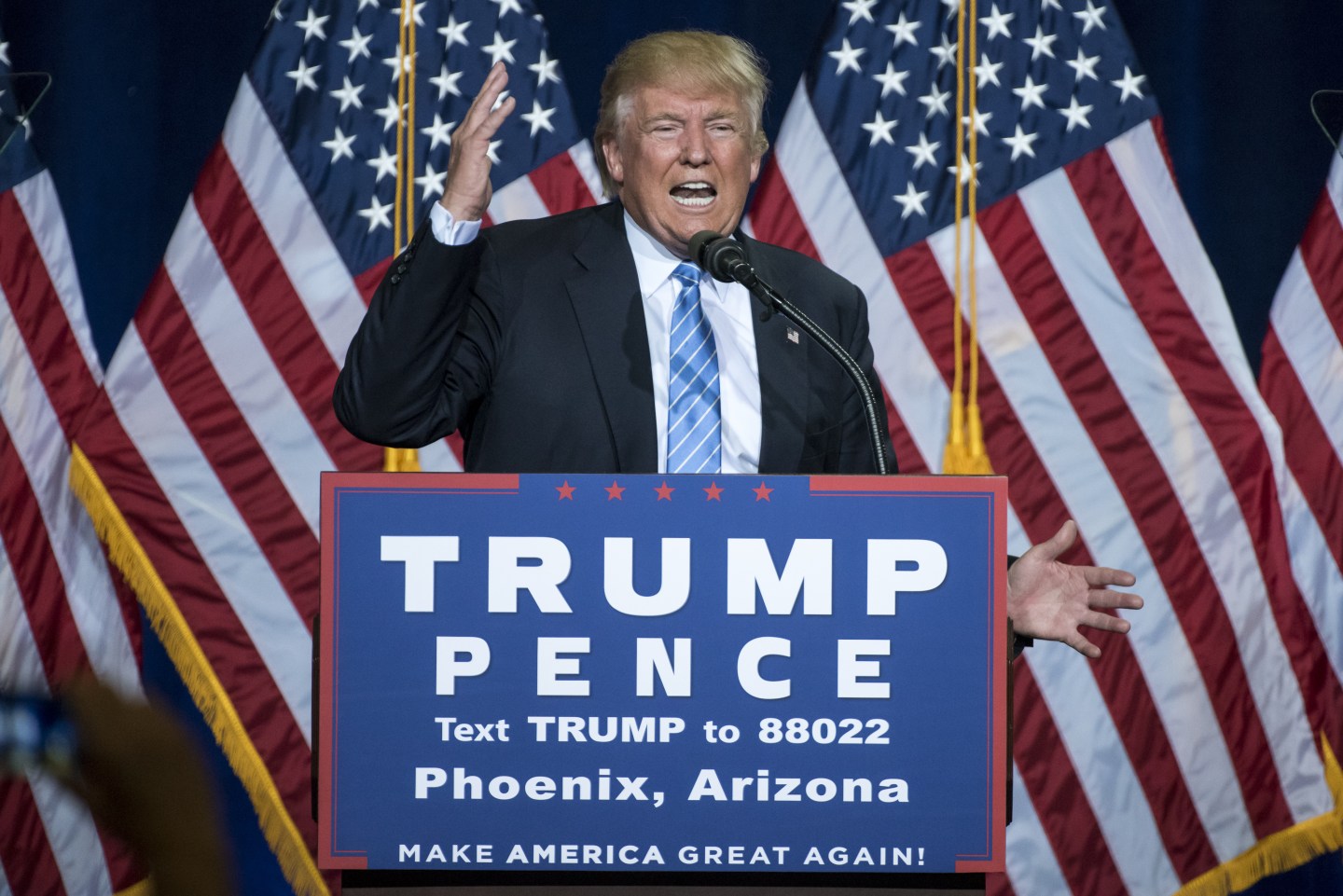 Donald Trump, 2016 Republican presidential nominee, speaks during a campaign event in Phoenix, Arizona, U.S., on Wednesday, Aug. 31, 2016. Trump returned to form in Phoenix Wednesday night with a nativist immigration plan definitively ruling out legal status for undocumented immigrants, as well as proposing to build a wall on the southern border of the United States and forcing Mexico to cover the cost. Photographer: David Paul Morris/Bloomberg via Getty Images
David Paul Morris/Bloomberg via Getty Images

Donald Trump left no doubt Wednesday that he would end his campaign as he began it, promising to build a wall paid for by Mexico, deport millions of people in the U.S. illegally and stoking fears about those in the country without legal status. Outlining in the finest detail yet his immigration plans in Phoenix, Trump made clear that there would be no general election pivot, none of the “softening” he promised just weeks ago.

“Anyone who has entered the United States illegally is subject to deportation,” Trump told a rowdy crowd of supporters in the Republican-leaning state. “That is what it means to have laws and a country.”

The speech capped a head-spinning month for the Republican nominee, who has struggled to appeal to the more diverse general electorate without upsetting the hawkish base that propelled him to the top of the GOP ticket. After spending the month of August publicly pondering a shift on immigration, Trump outlined a 10-point plan Wednesday evening that was a greatest hits compilation of his most polarizing and by his own admission “extreme” statements, including creating a deportation task force, suspending immigration from certain countries and creating an ideological test for potential immigrants.

Rather than trying to expand his appeal to new voters, his immigration plan was a paean to the same fervent base that had begun to doubt his commitment to his signature campaign issue.

The speech was delivered the same day as Trump’s hastily-organized meeting with Mexican President Enrique Peña Nieto, which was designed to help supporters and swing voters envision him as president. The tone of the two statements, hours apart, could hardly have been more different, as the previously sedate Trump, who espoused respect for Mexican-Americans as “spectacular hard-working people” who are “beyond reproach,” later that same day suggested that many were criminals and called once again for the forcible removal of those in the U.S. illegally.

Hours after being told by Peña Nieto that Mexico would not pay for a border wall, Trump repeated the promise to his crowd in Phoenix. Still, he changed his tune in other ways after the meeting. “In the end we’re all going to win. Both countries. We’re all going to win,” Trump said Wednesday night of negotiations with Mexico. During his announcement speech in June 2015, however, he had cast the relationship as a zero-sum game. “When do we beat Mexico at the border?” he said. “They’re laughing at us, at our stupidity. And now they are beating us economically. They are not our friend, believe me.”

Along with the deportation force and the border wall, the plan Trump outlined includes limits on legal immigration and the prioritization of deportations for millions who have committed other crimes, benefit from government assistance programs, or who have overstayed their visas. Trump, who said he is opposed to “amnesty,” said there would be no legal status for any of the 11 million undocumented people in the U.S. unless they first “return home” and re-apply for entry. “No one will be immune and exempt from enforcement,” he said. Trump also proposed “detainers” to allow law enforcement to hold and initiate deportation proceedings against any person in the U.S. illegally who is arrested even before they are convicted. He also suggested he would model his plan on the Eisenhower-era “Operation Wetback,” which saw the deportation of more than 1 million people in the U.S. to Mexico, often without due process.

Trump’s new plan came after weeks of confusion and mixed messaging on his immigration policies. Starting after Trump all-but tied up the Republican nomination in May, advisors surrounding the candidate began pushing for him to moderate his hardline immigration stance and support for forced deportation. His brash, anti-immigrant rhetoric may have helped propel him to a primary victory, but top aides wanted him to adopt a more centrist tone to win over a more diverse general electorate.

At the Republican convention in Cleveland in July, Trump struck his usual nativist tone, emphasizing stories of undocumented immigrants who had committed violent crimes in the U.S. But weeks later in August, the message started to change. Trump began making overt pitches to minority voters in his campaign speeches, and on August 20 he met with Hispanic leaders in a newly announced Hispanic advisory council. The following day, Trump’s campaign manager Kellyanne Conway, who was promoted specifically to help stabilize and manage Trump, said on CNN that his support for forced deportations was “to be determined.”

See also: Here’s What Donald Trump Plans to Do If He Loses the Election

Two days later, after a frenzy of headlines about Conway’s remark, Trump sparked even more speculation about a serious reconsideration of his position: he told Fox News’s Sean Hannity that he’d be open to “softening” his stance. “There certainly can be a softening because we’re not looking to hurt people,” Trump said in the taped town hall on August 23. But even Trump seemed confused about what to say; he polled the audience at the taping about what he should do. After asking the audience who wanted undocumented immigrants “thrown out” and who wanted to allow them to stay, he said, “This is sort of like a poll. And this is what I’m getting all over the country, please, please—we are going to come out with a decision very soon.”

His “softening” comment drew the ire of even his most devoted fans such as conservative commentator Ann Coulter, who, in a cruel twist of fate, had published a book released that very day which said in the opening pages, “There’s nothing Trump can do that won’t be forgiven. Except change his immigration policies.” (Still, she did forgive him after Wednesday’s speech.) Trump’s team resorted to awkward verbal gymnastics to maintain order. Spokesperson Katrina Pierson told CNN, “He hasn’t changed his position. He has changed the words he is saying.”

Despite Trump telling Hannity he would have a decision “very soon,” his campaign had already canceled his immigration speech, which was due to be held that Thursday, and postponed it for a week. Then, in one final shakeup hours before he was set to deliver it, Trump announced the trip to Mexico.

But the speech Trump ended up delivering Wednesday brought him back to where he started, with discussions of a deportation force and Mexico paying for a border wall. The pivot he’d been hinting at for weeks turned him back 360 degrees, and a muddled summer turned out to have been mere misdirection. It was as though the past few weeks had never happened.