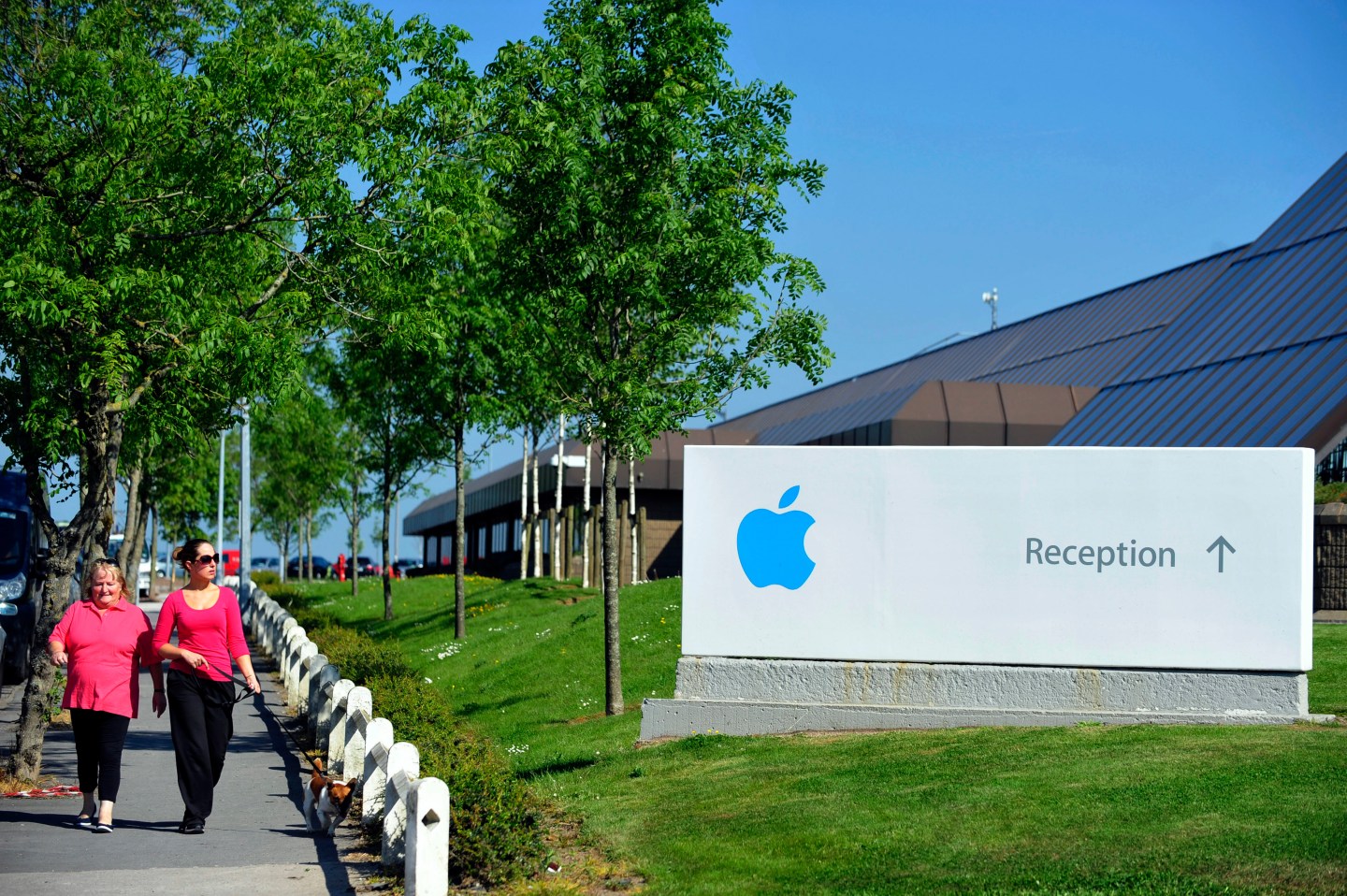 Pedestrians walk with a dog near Apple Inc.'s campus in Cork, Ireland, on Tuesday, June 4, 2013. Speaking to lawmakers in Dublin last month, Irish Finance Minister Michael Noonan insisted the country is no tax haven, after a congressional hearing in Washington focused attention on Apple Inc.'s maneuvers to minimize its tax bill through its operations in Cork in the south of Ireland.
Photograph by Aidan Crawley—Bloomberg via Getty Images

The White House and the Treasury Department, which enforces federal tax policy, warned that U.S.-EU economic relations could be affected by the European Commission’s ruling that Apple (AAPL) had received illegal state aid under its agreement with Ireland.

Business groups protested. The Business Roundtable, which represents U.S. chief executives, called the decision “an act of aggression” against a law-abiding U.S. company and a sovereign government.

Members of both parties in Congress pointed to the stunning decision as evidence that the U.S. tax code should be rewritten to give American companies an incentive to bring home some $2.1 trillion in U.S. corporate profits held abroad. But there was no sign that lawmakers were any closer to bridging the substantial divides that have prevented agreement up to now.

“Above all, this is yet another reason why we need to fix our tax code,” House Speaker Paul Ryan, the highest-ranking elected Republican, said in a statement. “Today’s decision should be a spur to action.”

Apple was found to be holding over $181 billion offshore, more than any U.S. company, in a study published last year by two left-leaning nonprofit groups: Citizens for Tax Justice and the U.S. Public Interest Research Group Education Fund.

“This is yet another example of why we need to reform the international tax system to ensure these revenues come home,” said Senator Charles Schumer, the chamber’s No. 3 Democrat.

Even the European Commission voiced indirect criticism of the U.S. tax code, suggesting that Washington could require Apple’s Irish operations to pay larger amounts of money to the U.S. parent to finance research and development, which would increase Apple’s U.S. tax bill.

Apple Was Just Hit with a $14.5 Billion Tax Bill

Republicans and Democrats in the Senate have discussed plans to encourage the repatriation of U.S. profits abroad.

But House Republicans hope to move broader legislation next year that would cut the U.S. corporate tax rate from 35 percent to 20 percent and adopt a “territorial” system that would exempt the overseas earnings of U.S. companies from U.S. taxation. Democrats have dismissed that as a massive tax giveaway.

Other critics in Washington warned that Tuesday’s European Commission move would encroach on U.S. government jurisdiction and ultimately add to the federal deficit.

“We are concerned about a unilateral approach … that threaten(s) to undermine progress that we have made collaboratively with the Europeans to make the international taxation system fair,” White House spokesman Josh Earnest told reporters.

Apple and Ireland said they would appeal the EU decision. But some analysts said the ruling, if upheld, could change the calculus that has kept U.S. corporate money overseas if it means higher taxes in low-tax European countries like Ireland.

“The scheme of U.S. multinationals parking money offshore indefinitely, taxed at zero, may be coming to an end,” said Steven Rosenthal of the Tax Policy Center research group.