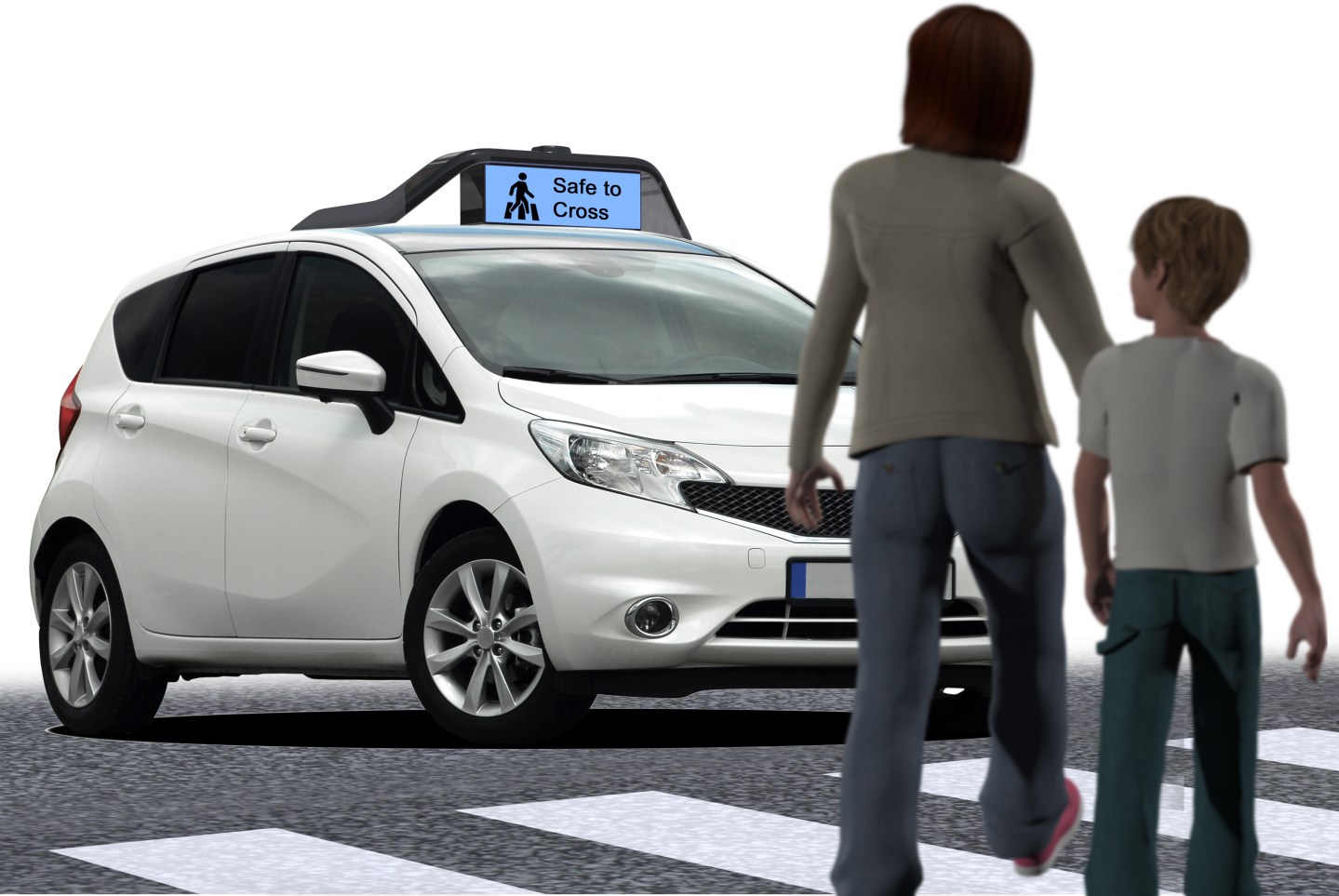 The first intelligent robots that humans interact with on a regular basis will likely be self-driving cars—not a humanoid working in the cubicle next door.

Drive.ai, an autonomous vehicle tech startup founded by former graduate students working in Stanford University’s Artificial Intelligence Lab, officially came out of stealth mode—a temporary quiet period to avoid alerting competitors—on Tuesday with some details about what it’s building and a high-profile addition to its board. Steve Girsky, who sat on the General Motors board for seven years until June, has joined the Drive.ai board.

The Mountain View-based startup, which has raised $12 million from an undisclosed venture capital firm and strategic investors, was forced out of stealth in April when it was awarded a license to test autonomous vehicles in California. But until now, little was known about what Drive.ai was working on.

In two words, it’s about brains and personality.

The startup is focused on developing deep learning software—a sophisticated form of artificial intelligence—and applying it to everything the self-driving car does from recognizing objects to making decisions. Drive.ai, which was founded in April 2015, is combining deep learning software with hardware to make self-driving retrofitted kits designed for business fleets. The company will be launching pilot programs with unnamed partners in the coming months to test the delivery of people and things on fixed routes.

The company’s initial market approach will focus on proving the technology with route-based vehicle fleets for industries such as freight delivery, ride-sharing, and public or private transit. Eventually, the company could work with automakers or businesses to integrate the systems within the vehicle.

“Deep learning is the best enabling technology for self-driving cars,” Sameep Tandon, CEO and co-founder of Drive.ai, tells Fortune. “You hear a lot about all these things on the car: the sensors, the cameras, the radar, and Lidar (light-sensitive radar). What we really need is the brains to make an autonomous car work safely and understand its environment.”

Deep learning is used by a few other companies developing self-driving car technology, but it’s typically limited to perception—recognizing an object—and not for making decisions.

“Deep learning is the closest algorithm to how the human brain learns; it’s not rule-based,” explains Carol Reiley, president and co-founder of Drive.ai. “It’s much like how a 16-year-old, or young driver learns. Instead of hard-coding rules, you’re given a lot of different examples —what is right, wrong, safe, what is a car, what is not a car. It starts to generate its own set of rules on how to navigate in the road.”

The company’s co-founders—there are eight of them—are passionate about the potential for deep learning to help self-driving cars handle the millions of situations that pop up on the roads. Reiley even opted to use her wedding fund to provide seed funding for the company.

But Reiley, Tandon, and the rest also recognize that it’s not enough for these cars to be smart like humans. They also have to be easy to communicate with and likable.

“My passion is really figuring out ways to help humanity through robots, and I view the self-driving car as a robotic, and the first one that most people are going to interact with,” Reiley says. “People’s first interaction with a self-driving car will not be in the car, but as bystander either as a pedestrian, bicyclist, motorcyclist, or another driver. To gain trust of the public, these cars have to communicate with the outside world, and be able to emote what it’s intentions are.”

Drive.ai is outfitting its six autonomous test vehicles with sensors, software, and audio equipment to learn how to best communicate with people. An LED sign will be on the roof rack and will be able to send messages and emojis directed at pedestrians and other drivers. The car will also be able to emit sounds.

For instance, the car might sound a friendly horn and display a message to tell a pedestrian that it’s OK to cross in front of them.

The young company is facing off against tech giants such as Google (GOOG), Tesla (TSLA), and Uber as well as traditional automakers like Ford (F), General Motors (GM), and Toyota (TM), in the race to deploy autonomous vehicles. Not to mention a growing collection of startups, notably Nutonomy, an autonomous vehicle software startup and MIT spinoff that has managed to beat them all to market with a self-driving taxi service in Singapore.

For more about other companies getting into self-driving cars, watch:

The race to develop autonomous vehicles has prompted a number of automakers to snap up these small, yet talent-rich startups companies.

Earlier this month, Volvo Car Group agreed to a $300 million alliance with Uber to develop self-driving cars. Ford also announced its intention to make self-driving cars for commercial ride-sharing or on-demand taxi services by 2021, a target the automaker says it will reach by expanding its Silicon Valley research lab, as well as investing in or buying autonomous vehicle technology startups. Meanwhile, GM snapped up Cruise Automation for more than $1 billion, and sank $500 million into ride-hailing service Lyft as part of its plan to deploy self-driving taxis.

The co-founders at Drive.ai say they’re not interested in being acquired.

“Our goal is build a sustainable large organization that really brings a product to market,” Tendon says. “Acquisition is not our goal here. Where we really think we’ll be able to make an impact is with deep learning.”