Why Google and Microsoft Are Fighting for Student Customers 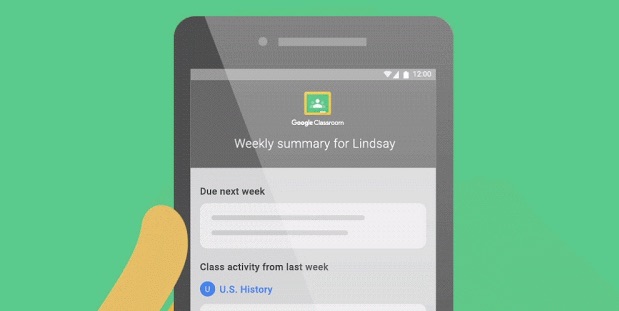 Tech titans know that if they want to expand their customer bases, they’ve got to get ’em while they’re young. That’s why Google and Microsoft have targeted teachers and younger students with special editions of their bread-and-butter software packages.

The idea is if you learn to type on Microsoft Word or Google Docs, you’ll keep typing and working on one of those options for life. That’s the rationale behind the companies’ respective Google Classroom and Microsoft Classroom franchises.

The latest Google (GOOG) feature upgrade, as outlined in a Google Education blog post, lets teachers automatically share summaries of their students’ work with parents. Once the parents or guardians have been invited by the teacher, they can get weekly or daily email summaries of what’s going on with their child’s classwork and related announcements.

It is unclear if Microsoft Classroom, now in preview, will offer the same feature, but it could likely happen soon if it doesn’t already—such is the nature of feature wars after all.

Update: Responding to a request for comment a Microsoft spokeswoman said the company is “gathering feedback on the types of involvement that parents want to have with their student’s class work.”

Microsoft (MSFT) Office (and Office 365) and Google Apps are battling it out to be the word processing, spreadsheet, slideshow creation tools of choice for businesses, and it is a hard-fought war. Clearly, the notion of getting kids used to your tools rather than the other guy’s is attractive to the companies.

For more on Google Apps, watch:

Microsoft is the incumbent power in “productivity applications,” with Office entrenched in Fortune 500 companies, among other big institutions, and it is pre-installed on many new PCs.

But Google Apps for Work has made inroads particularly among startups and smaller companies. Many critics have also interpreted what Microsoft has done with Office 365—basically the online, cloud-based version of Office—as a direct reaction to Google Apps.