5 Things You Need to Know About Paul Manafort 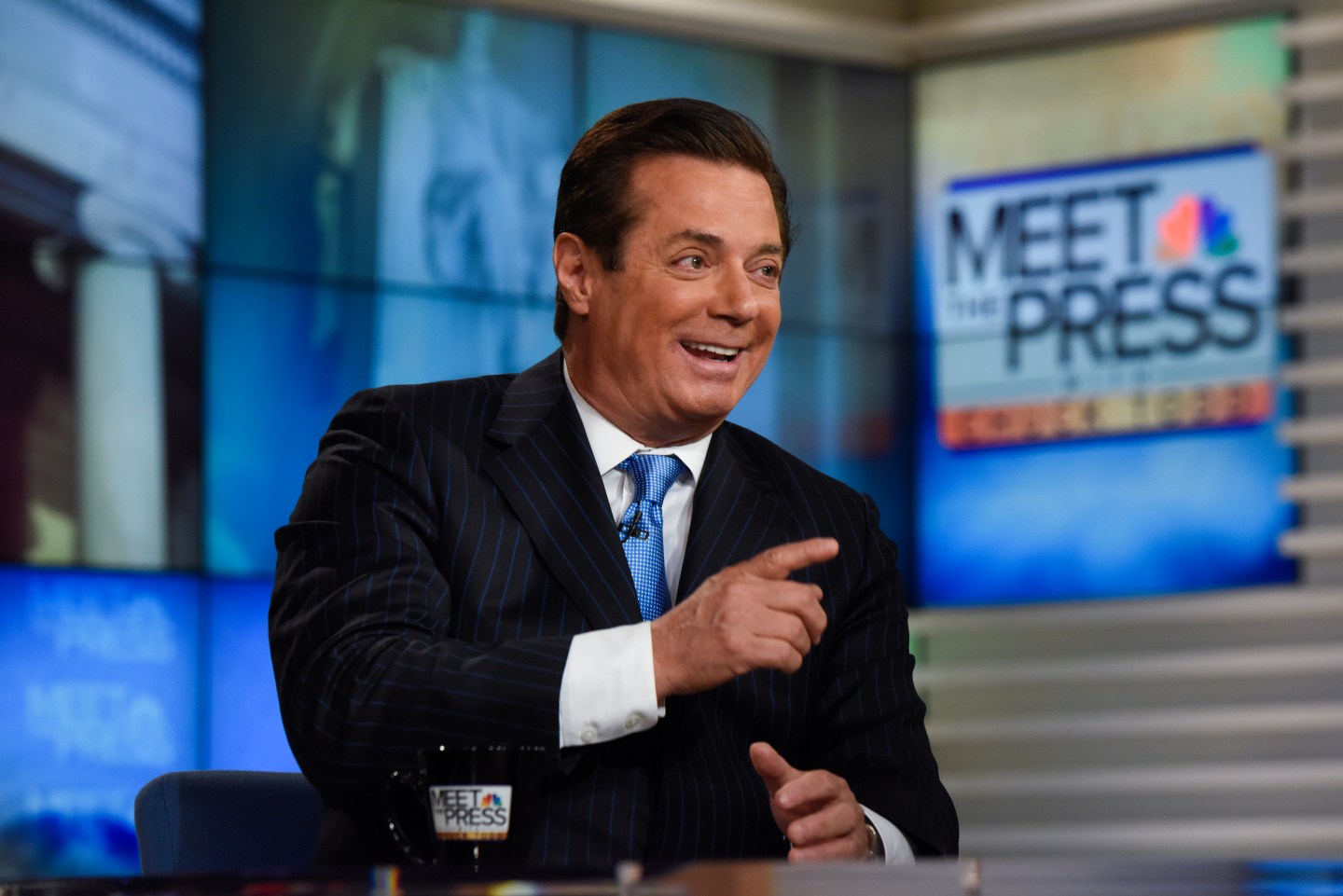 It’s easy to see why Donald Trump has a strong affinity for Paul Manafort. Like his boss, Manafort is the scion of a family construction empire. In pursuit of money, Manafort matches his boss in swashbuckling, globetrotting entrepreneurship, luring the world’s best-paying clients: in his case, notorious Russian oligarchs, assorted dictators, and the former Ukrainian President backed by Vladimir Putin. Both are big personalities, and magnets for controversy who relish bashing the “corrupt” press corps. It’s obvious that Manafort’s many controversies—issues that discouraged other candidates from hiring him in the past—didn’t bother Trump, whose business past is just as checkered as his new campaign manager’s record in politics.

But now, a new uproar may make Trump and his staff regret not vetting Manafort, 67, more thoroughly. On Aug. 15, The New York Times reported that the Ukrainian government is investigating whether the previous regime headed by Manafort’s now-deposed client, Viktor Yanukovych, paid the advisor over $12 million in cash stolen from taxpayers.

Manafort has denounced the article, and the allegations, as thoroughly baseless. Still, given Trump’s praise of Putin, and his tolerant view of Russia’s invasion of Crimea, the charge that Trump’s top lieutenant pocketed millions from a pro-Russian head-of-state has ignited a storm of controversy.

So who is Paul Manafort? Put simply, he straddles two worlds. One, as the ultimate U.S. political insider and tireless promoter who’s secured giant packages of aid from Congress. Second, as a political strategist who has polished reputations for a roster of some of the most infamous leaders on the planet.

Manafort’s grandfather migrated to Connecticut from Italy, and in 1919 founded a construction company that his father and three brothers built into Manafort Bros., a leading site development contractor in New Britain, a town of 73,000 near New Haven. In 1965, Paul Manafort Sr. was elected to the first of three terms as the Republican mayor of New Britain, and politics, rather than toiling at worksites, enthralled his teenage son. New Britain had a lot more Democrats than Republicans, but as his former parter and fellow Connecticut native, political consultant Roger Stone, told the Hartford Courant, Manafort Sr. “understood the Reagan Democrats before Reagan.”

It was his father’s example that drew Manafort to Trump. “Like my father, Trump understands working class Americans,” Manafort noted to the Courant. “The magic of his campaign, on his own vision and skills, was to connect to the frustrations that exist in America today.”

In 1970, as a student at Georgetown University, Manafort helped found the Kiddie Corps, an influential group of young Republican activists. That year, the Kiddies sparked the campaign that elected Thomas Meskill as governor of Connecticut.

Rising Under Reagan and Bush

Manafort remained at Georgetown to earn a law degree, then in 1973 joined the Ford Administration in the department of presidential personnel. His first big break came three years later, when Ford was facing a primary challenge from Reagan, and needed to keep the former California governor from peeling off shaky delegates. At 27, Manafort headed the delegate initiative in the Northeast—his boss and mentor was future Secretary of State James Baker—and won kudos by getting virtually every delegate won by Ford to vote for him at the convention, an effort that was essential toFord’s clinching the nomination.

That success led to key roles in both successful Reagan campaigns, as well as George H.W. Bush’s victory in 1988. Manafort reached his U.S. political pinnacle in 1996, when he ran the convention that nominated Bob Dole. In 2008, Manafort was in the running to head the McCain convention, but the candidate reportedly bristled at hiring Manafort because of his record of counseling the pro-Russian leader of Ukraine.

Apparently, other candidates took the same view. It would take 20 years before Manafort was chosen by another candidate, a major risk-taker named Donald Trump.

In 1980. Manafort co-founded Black, Manafort, Stone and Kelly (BMSK), a powerhouse beltway lobbying firm alongside partners Stone, a longtime Trump confidante, and Charles Black, a leading strategist in the John Kasich campaign. One of its most lucrative clients was Jonas Savimbi, leader of UNITA, the pro-Western rebel army fighting the Communist government in Angola. Manafort helped make Savimbi a heroic figure among conservative Washington think-tanks, and aided him in securing hundreds of millions of dollars in aid from the Reagan and Bush Administrations, money that never brought victory.

In the mid-1980s, the regime of Ferdinand Marcos, the dictator of the Philippines, paid BMSK $950,000 a year to lobby for funding, as well as polish his blackened reputation among lawmakers, with Manafort serving as his chief advocate. Another top client was Mobutu Seko of Zaire, renowned as the quintessential corrupt African dictator. Manafort even sought to recruit Siad Barre, the strongman of Somalia. In her book “Choosing the Hero,” Riva Levinson recalls that Manafort asked her assistance in luring Barre. When she objected on ethical grounds, the boss explained: “We all know he’s a bad guy, but he’s our bad guy!”

Levinson goes on to say that a running joke at BMSK held that its work was “like playing one big game of Stratego: building armies and scheming to take over the world. That is exactly what it feels like working with Manafort. In fact, at times, that’s exactly what is going on.” The plotting inside Trump Tower might reveal similar ambitions.

One of his most unusual assignments came in the heart of Old Europe. In 1995, Manafort was paid $90,000 by a Lebanese-born arms merchant to advise veteran finance official Edouard Balladur in what became an unsuccessful bid for the presidency of France. An investigation revealed that those funds were illegally funneled from the kickbacks and commissions collected from the sale of French submarines to Pakistan. What became known as the Karachi affair became an énorme scandale in France, damaging the reputations of the politicians involved, though they escaped prosecution.

Working in the Ukraine

In 2004, Viktor Yanukoviych, then the prime minister, “won” the vote for the presidency of the Ukraine, despite the opposition of the U.S. government, which regarded him as dangerously pro-Russian. The election caused rioting amid accusations of vote-rigging, and Ukraine’s high court invalidated the results. To rebuild his political base and reputation, Yanukovych turned to Paul Manafort.

Over the next five years, Manafort guided Yanukovych to parliamentary victories that restored him to office of Prime Minister. The consultant also refashioned his client’s image by convincing Yanukovych, who’d been delivering campaign speeches in Russian, to broaden his appeal by addressing the voters in Ukrainian. In 2010, Yanukovych won the presidency, surmounting the stain of the 2004 election. Although the State Department and the American ambassador criticized Manafort for supporting an ally of Putin, Manafort argues that he actually brought the Ukraine closer to the west. Indeed, the Yanukovych government did negotiate an historic free trade agreement with the European Union.

Before it was signed, however, a popular uprising forced Yanukovych to flee to Russia in 2014. Incredibly, Manafort remained in the country to rally Yanukovych’s old supporters and create a new party in opposition to the pro-western regime of president Petro Poroshenko—and he actually succeeded; his political offspring won several dozen seats in a recent parliamentary election.

According to the Times, a Ukrainian government investigation discovered a secret “black ledger” recording a gigantic cash payment from the Yanukovych regime to consultants and other recipients. All the cash flowed from laundered government funds looted from taxpayers. The hand-written records show $12.7 million in cash designated for Manafort from 2007 to 2012. The Times also cites accusations that Manafort exploited his position to secure, or at least attempt to secure, lucrative business deals, including the establishment of an offshore company that plotted to purchase the national cable television enterprise.

The Clinton campaign pounced, citing Trump’s praise of Putin, and demanding that Trump and Manafort disclose all payments and links to Russia and Ukraine.

Manfort made the following statement in response to the Times story:

“I have never received a single ‘off-the-books’ cash payment as falsely ‘reported’ by the New York Times, nor have I done work for governments of Ukraine or Russia. Further, all of the political payments directed to me were for my entire professional team: campaign staff (local and international), polling and research, election integrity and television advertising.”

During the Dole convention, colleagues nicknamed Manafort “the Count” after the Count of Monte Cristo for his dashing manner and winning ways. Sharp blades are pointing at his throat, and we’ll soon see if this skilled political swordsman can duel his way out of this new potential scandal.