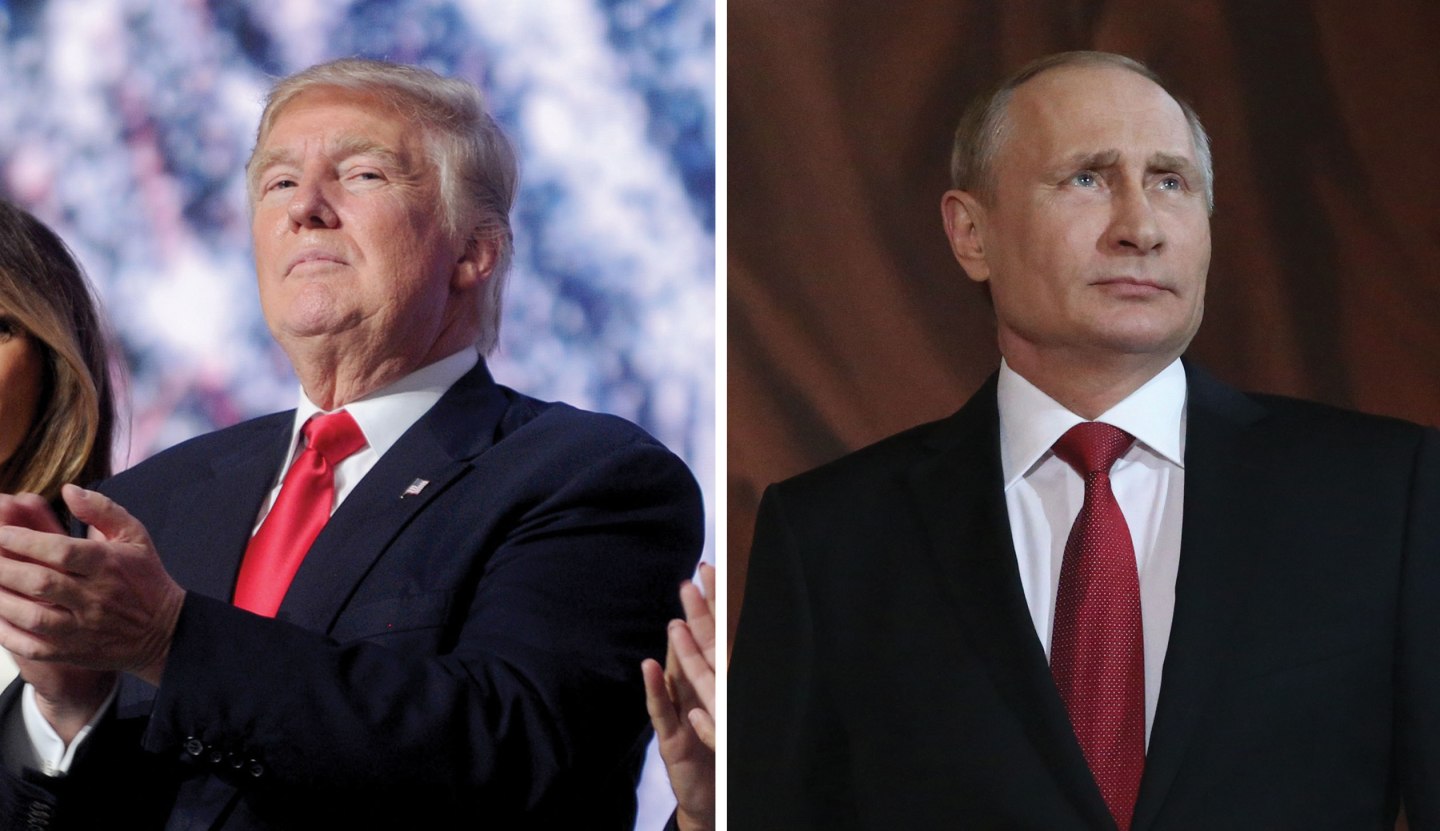 Hysteria and hyperbole are powerful things: put Donald Trump, American Russophobia and national party conventions into the same cocktail shaker and something potent is sure to come out. But one thing seems pretty clear: Donald Trump has never had what it takes to succeed in business in Russia. And barring a miraculous transformation of either Russia or the GOP nominee himself, he never will have.

Sure, Trump has always wanted to have an eye-catching project in Russia. But wanting isn’t the same as doing, any more than tweeting an indirect invitation to Miss Universe to Vladimir Putin (as he did in 2013) is a world away from actually getting a meeting with him.

Do you think Putin will be going to The Miss Universe Pageant in November in Moscow – if so, will he become my new best friend?

And there are two reasons why there are no Trump projects in Russia: in the past, it was too risky, and now, as the country grinds through its third year of austerity, there is no demand for his brand of upmarket bling.

The hotel business back in the anarchic years after the collapse of the Soviet Union was–sometimes quite literally– murderously competitive. U.S. businessman Paul Tatum was gunned down not far from his Radisson Slavyanskaya hotel in 1996 after a highly public dispute with his local partner. In 2002, Konstantin Georgiev, who ran the grand 1950s Peking Hotel, suffered the same fate. Police suspected, but never proved, a falling out with organized criminals.

In 1997, Trump had talked to the Moscow City Government, about leasing and redeveloping the vast, monstrous Rossiya hotel (the world’s biggest) right next to the Kremlin; the deal was estimated to be worth about $800 million. But the project died a quiet death in 1998 after the Rossiya’s general director Yevgeny Tsimbalistov died a considerably noisier one in a hail of mafia bullets.

Russia is “a scary place”

When Vladimir Putin restored a kind of order in the first decade of the century, there was again a window of opportunity, but it didn’t stay open long–at least not long enough for Trump to find a way to exploit it. The surge in oil prices between 2002 and 2008–from $18 a barrel to a peak of $148–rapidly shifted the balance of power between locals and foreigners. In a speech at a 2008 real estate conference, Trump’s son Donald Jr. made it clear how far the family was outside the closed community that controlled access to Russia’s prime real estate and to the petrodollars needed to develop it.

“As much as we want to take our business over there, Russia is just a different world,” Donald Jr. said, according to an article in the The Washington Post. “It is a question of who knows who, whose brother is paying off who. . . . It really is a scary place.”

To be sure, serious hotel companies with solid balance sheets like Four Seasons, Carlson Rezidor, Starwood (HOT) and Marriott (MAR) have all built businesses as operators there, but Trump is not cut from the same cloth. As Chris Weafer, founder of the consultancy Macro Advisory Services and a long-time Russia veteran, says: “It’s impossible to do business in Russia without a reliable local partnership. You have to be low-key and easy to get on with, and Trump’s personality would generally seem to work against that.”

2008 was arguably the last year that the high-end, glitzy project that is Trump’s trademark could possibly have succeeded in Russia. The “natural strength, especially in the high-end sector,” Trump Jr. called it in his 2008 speech, but that has since been exposed as illusory. Since the Great Recession, and even more since the U.S. and Europe imposed sanctions in the wake of the annexation of Crimea, the Russian economy has been on a downward path, shrinking 3.7% last year and an estimated 1.2% this year, according to the IMF.

It follows that ostentatious luxury and too-obvious corruption is out of fashion in Russia too. That was proved again this week when Putin fired the head of the Federal Customs Service, Andrey Belyaninov, after investigators found nearly $900,000 in cash at his home. It was, in fact, already out of fashion in 2009, when Trump sold a $95 million Florida mansion to Dmitry Rybolovlev, the owner of fertilizer company Uralkali. But that was far from signalling any closeness to the Russian power center.

Not a friend of Putin

Putin had for years been squeezing out businessmen whom he deemed uncooperative, and Rybolovlev had already angered Putin with his cavalier attitude to an accident at his largest mine that caused a local scandal. Soon after the deal with Trump, Rybolovlev went into an extremely comfortable exile, having sold Uralkali to an acceptable local buyer, Suleiman Kerimov. In fact, selling U.S. properties to Russians looking to move their money to a place where Putin’s tax collectors can’t get at it seems to be the one line of business that Trump has done in Russia.

“Russians make up a pretty disproportionate cross-section of a lot of our assets,” Trump Jr. told a real estate conference in 2008, according to the Post article. But given that the country has exported over $220 billion of capital since the start of 2014, there are a lot of people who could make similar claims.

Trump’s third–and, to date, final–opportunity to get into the Russian market came in 2013, when he appeared to have found that elusive and desperately-needed trusted local partner, in the person of developer Aras Agalarov. It was Agalarov who paid around $7 million for the rights to bring Trump’s Miss Universe pageant to his flashy Crocus City development in Moscow.

But there was no meeting with Putin himself, just a few words on the telephone with Putin’s spokesman Dmitry Peskov. To put in terms that Trump himself would understand, Azerbaijanis like Agalarov don’t get that close to the real power, any more than Ukrainians like Viktor Yanukovych, the notoriously corrupt former client of Trump’s campaign boss Paul Manafort.

There has never been any statement from the Kremlin that would substantiate his claim to NBC that “I do have a relationship (with Putin) and I can tell you that he’s very interested in what we’re doing here today.” Agalarov himself told Forbes at the time that discussions of projects never went beyond a sharing of views (“he said they were quite interesting”). As for Putin, he doesn’t have time for foreign investors who don’t actually have skin in the Russian game.

Within four months, the annexation of Crimea and the war in eastern Ukraine in 2014 had again ended any whiff of real business in Russia. In the meantime, control of the economy has concentrated in an even tighter circle around Putin, much of which is under U.S. sanctions (although that might change once a President Trump gets round to “looking at” the legality of Russia’s land grab the biggest in Europe since World War II).

The banks, such as Deutsche Bank AG, on whom Trump has relied so heavily over the years, have no appetite for the place any more (Deutsche said it would end corporate banking there in September last year), and Trump has never been one to build the kind of hotels that Russia actually needs–functional, unspectacular three-star business hotels in provincial cities far away from the bright lights of Moscow.

Donald Trump may have become a big fish in U.S. politics. But whatever political use Vladimir Putin may have for him, in terms of actual business, it’s clear that he’s a fish completely out of water in Mother Russia.

UPDATE: The story has been updated to reflect that Carlson Rezidor is the operator of SAS Radisson.