How Tinder Used Greek Life For More Than Just Hookups 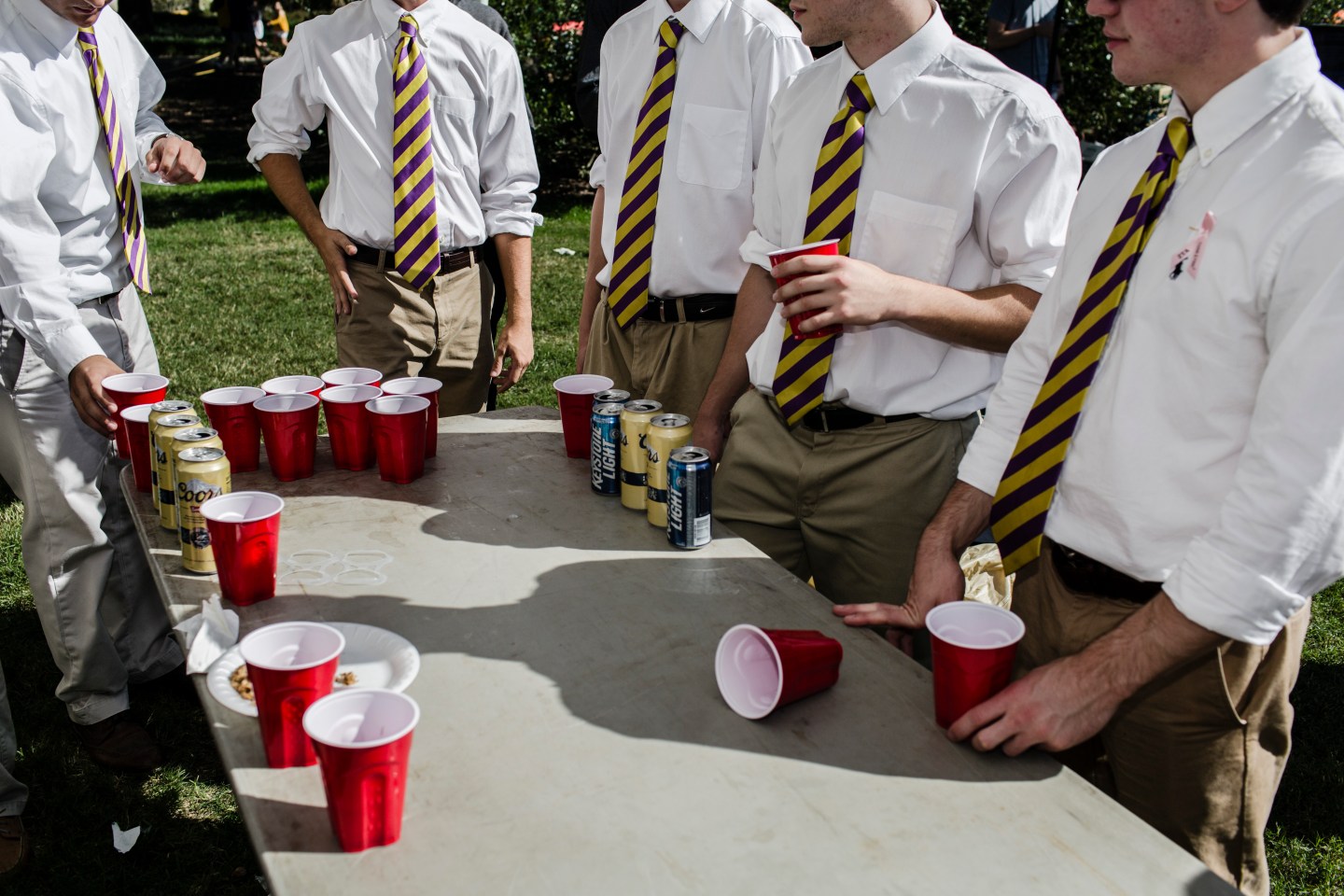 This is the first part of a three-part series on the business of Greek life.

Justin Mateen, an Alpha Epsilon Pi brother, had partying down to a science. As a sophomore at the University of Southern California, he’d find a great venue, book a great guest (“Back then, it was cool to bring Snoop Dogg to parties,” he says), and make sure everyone knew about it. He’d also guarantee the bar owner a certain number of drink sales for the night. If he hit the mark, he’d take a cut; if not, he’d cover the shortfall.

The latter didn’t happen often. Mateen would pre-sell tickets and charge double at the door. Plus, there was one thing he always made sure to do: distribute tickets to the most social and influential Greek members on campus.

After college, when he and his co-founders were in the throes of building a dating app called Tinder, he relied on similar tactics. Mateen hosted a huge party at his parents’ California home in September 2012 and invited popular sorority sisters and fraternity brothers from several colleges in the area. This time, the ticket to the party wasn’t cash – it was a Tinder download.

He’s hardly the only one to harness its potential. The founders of Thrillist, who started the lifestyle brand in college, used their own fraternity experience to inspire their content. The founders of video analytics company Hudl hired their first full-time employees from their Greek house. The founder of women’s lifestyle site PureWow says he still uses tactics he learned as social chair in his fraternity to motivate his staff today.

Indeed, a 2014 Gallup poll found that being involved in a fraternity or sorority may boost one’s interest in entrepreneurship. Of the 30,000 college graduates surveyed, those who had participated in Greek life were more likely to start their own businesses than those who hadn’t.

While participating in Greek life isn’t a guarantee of later entrepreneurial success, it can play an instrumental role in the way founders market and manage their companies. The entrepreneurs behind billion-dollar companies such as Uber, Snapchat, Dropbox, Lyft, Blue Apron, EventBrite, and Warby Parker all pledged fraternities in college. So did the founders of Fortune 500 companies like Nike, Wal-Mart, and Home Depot.

Related: What the Founders of Facebook, Snapchat and Home Depot Have In Common

‘Skills they don’t teach you in business school’

As with any club or organization, holding a leadership position within a fraternity or sorority can help with building and leading organizations in the real world.

Greek life leaders manage the house like a business – whether they realize it or not. They draft charters, manage dues, file tax returns, and keep track of income statements. It’s not uncommon for a 19-year-old treasurer to manage a budget of anywhere from $500,000 to $2 million, says Bill Crane, vice president of Georgia’s Phi Kappa Tau housing corporation. The more successful the chapter, the more financial support it receives from the university and alumni.

“When you graduate, you have a built-in network, you’ve made some alumni relationships, and you have business skills they don’t teach you in business school,” says Crane.

And it looks like business schools are catching on. The University of North Carolina’s Kenan-Flagler Business School began offering a separate leadership course specifically for fraternity and sorority presidents in 2011. The curriculum includes lessons on engaging an organization, understanding leadership styles, and setting development goals.

Jeff Lieberman, managing director at investment firm Insight Venture Partners, says he had no idea what he was doing when he took a president role at Beta Theta Pi, though the mistakes he made then made him a better leader today.

“I cringe when I think about my days as the president of a fraternity. I was a terrible leader, in hindsight,” he says. “It was a safe place to learn and screw a lot of things up.”

‘Relatability’ as a marketing tool

Whitney Wolfe wasn’t the most dedicated sorority member when she was a Kappa Kappa Gamma at Southern Methodist University. She often looked for ways to skip chapter dinners and other events. But a few years after graduation, she found herself back on campus urgently texting friends of friends and younger sorority sisters for a chance to speak at one of those chapter dinners she had tried to avoid.

The year was 2014: the former Tinder co-founder had just come out of a tumultuous time, having sued the dating app for harassment and discrimination (specifically by the aforementioned Mateen, her co-founder and ex-boyfriend). With the high-profile suit behind her (more on that later), Wolfe was launching a new dating app called Bumble.

Now, she wanted the support of her former sorority sisters. So she showed up at the house with thongs.

It was all part of an early marketing strategy. Armed with yellow Hanky Panky panties, balloons, cookies and koozies, she stood on a table at chapter dinner and made a pitch to the most influential and well-connected girls on campus. If they downloaded Bumble, they got a cookie. If they downloaded Bumble and texted their friends to download the app, they got panties.

“We approached it with a very psychological undertone of relating to them and making sure they felt comfortable,” Wolfe says. “Relatability is the most important part of marketing. They could see themselves in us.”

The money Wolfe spent on panties seems to have paid off; Bumble’s valuation is estimated at north of $500 million. The company has also kept its finger on the pulse of America’s sororities with a Bumble Honey college ambassadors program. The program includes 500 paid brand reps – many of whom are Greek – at universities across the U.S.

Not everyone is convinced that Greek life is a good foundation for building a business — or much else, for that matter. Ex-frat boy Andrew Lohse, the 26-year-old author of Confessions of an Ivy League Frat Boy, joined a fraternity at Dartmouth and bought into the lifestyle for a period of time. In 2010, he was suspended for a year on charges related to the possession of cocaine at the frat house. Upon his return, he accused his fraternity of hazing. The disturbing allegations included forcing pledges to swim in a kiddie pool of vomit and chug cups of vinegar.

“I absolutely don’t think fraternities prepare young men to have an entrepreneurial vision,” he says. “It’s about a groupthink, a tribal outlook, and a clan-ish behavior irrespective of ethics and any kind of moral compass.”

Lohse adds that same-sex organizations like fraternities and sororities have “no place on the 21st century college campus.” In March, Harvard University’s sexual assault prevention task force published a report linking sexual assault to same-sex clubs – including fraternities and sororities. The task force found that 47% of female seniors who participated in these clubs had reported experiencing non-consensual sexual contact. Starting in the fall of 2017, students who join a fraternity or sorority will not be eligible for other leadership roles at Harvard (like sports teams) and will not receive recommendations for scholarships and fellowships from the Dean.

This notion of “frat culture” isn’t new, and it doesn’t only exist on college campuses. Silicon Valley is often criticized of perpetuating a male-dominated, exclusionary work culture.

In the 2014 lawsuit Whitney Wolfe filed against Tinder and its parent companies, Wolfe claimed she was harassed and forced out of the startup. “Although it is tempting to describe the conduct of Tinder’s senior executives as ‘frat-like,’ it was in fact much worse – representing the worst of the misogynist, alpha-male stereotype too often associated with technology startups,” the lawsuit said. The suit was settled for a reported $1 million.

Mateen, who left the company after the lawsuit, has not publicly commented on this subject before. When asked about this claim, he told Fortune he doesn’t think Tinder had a “frat-like” culture. “I think it just had a culture like Facebook had early on where people were working around the clock, people were working at home. We were living and breathing Tinder,” he says.

Startups of all stripes are actively working to counteract the bro stereotype. The staff at sports video analytics company Hudl skews male – the breakdown of its 430 full-time employees is roughly 75% male and 25% female. John Wirtz, Hudl co-founder and former vice president of Pi Kappa Alpha, says the company is not where he wants it to be in terms of the gender split, but he is actively hiring with diversity in mind. The executives have retroactively revised language in job postings to make them more inclusive.

“Frankly, diversity is good for our business,” he says.

Thrillist started as a newsletter aimed at young, fun-seeking guys. The venture has been called “a bro empire” and its offices “frat-tastic.” Adam Rich, Thrillist co-founder and former rush chair of Sigma Alpha Mu, says the exposure to the homogenous audience at the fraternity helped them better cater to its audience. In the early days, Thrillist’s staff was 100% male. Today, there’s a pretty even split.

Rich met his co-founder through Greek life, and he credits his fraternity for teaching him lessons in governance, negotiation, and leadership that he uses as an entrepreneur today. He understands that Harvard’s crackdown is done to prevent sexual violence and unhealthy gender dynamics, but believes these issues are “symptomatic of the larger youth culture.”

“I get why they’re cracking down on Greek culture, but you’re whacking the mole rather than actually addressing a real problem. Yes, you can go and make it hard to be Greek, but that’s not a very bold plan. It’s not a very insightful plan,” he says. “Ultimately, you risk denying your student body an important opportunity to engage in a greater degree of executive thinking.”