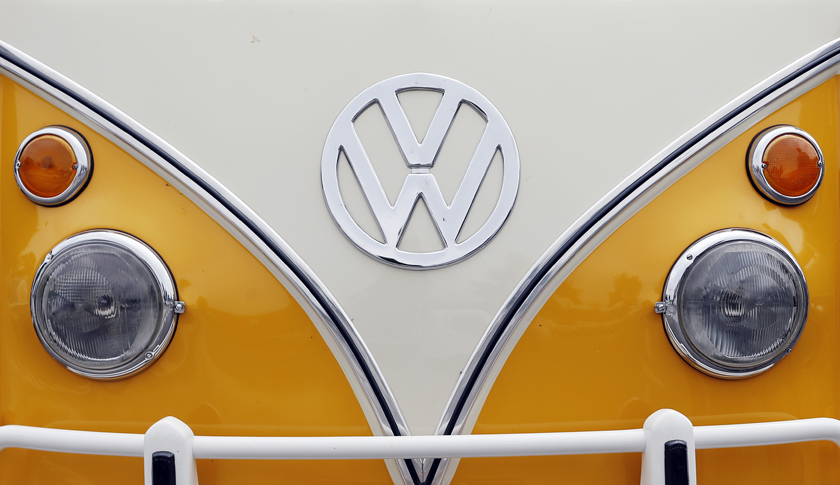 The Volkswagen logo is seen on a Kombi minibus during a Kombi fan club meeting in Sao Bernardo do Campo December 8, 2013. Volkswagen Brazil, the last plant to produce the Kombi, will cease production of the iconic vehicle on December 20 after 56 years of production. Higher manufacturing costs and increase in production time due to new auto regulations, which will require anti-lock brake systems and air bags in all cars produced in Brazil from 2014, contributed to its decision to stop the production of the Kombi, according to the company. Picture taken December 8, 2013. REUTERS/Paulo Whitaker (BRAZIL - Tags: TRANSPORT BUSINESS SOCIETY LOGO) - RTX16BOH
Photograph by Paulo Whitaker — Reuters

Partly in response to a speculative article at Jalopnik, Elon Musk has confirmed that the planned “high passenger-density urban transport” vehicle referenced in the latest Tesla master plan will be not an electric city bus, but a smaller vehicle built on the Model X chassis.

Some good guessing by @Jalopnik. The Tesla Minibus will be built on a Model X chassis. People density potential is surprisingly high.

Musk has also said the Tesla Minibus will be modeled on an iconic vehicle of the freewheeling, optimistic 1960s.

Here’s Jalopnik’s take (again, entirely speculative) on how the VW minibus would translate into Tesla-world:

Elon Musk confirms Tesla Minibus will be based on the Model X https://t.co/9UIUaTqh52 pic.twitter.com/QEq6w4kND2

The second Tesla Master Plan refers to the ‘minibus’ being currently under development, and says it “should be ready for unveiling next year,” along with heavy-duty electric trucks.

One big difference between the Tesla minibus and its VW forbear seems to be who would own it and how it would operate. Musk’s plan groups the Model X-based minibus under non-consumer vehicles, and suggests that they will operate autonomously as part of centrally-managed fleets.

That’s not really what Jalopnik’s Jason Torchinsky had in mind when he suggested Tesla is “about to eat Volkswagen’s lunch” by beating them to the punch on producing a stylish, modern minibus. He rightly identifies the huge nostalgia for the minibus that Volkswagen has frittered away by not delivering an updated version (alongside its other massive foul-ups). But that Boomer nostalgia rests on dreams of cross-country trips to Woodstock, not crosstown rides in an eight-passenger Johnny Cab.

The slight disconnect highlights one tricky aspect of the transition to the autonomous-vehicle future. Musk’s vision of shared and fleet vehicles, autonomously guided and on-call to anyone with a smartphone, is shared by many, and on a macro scale, it makes complete sense. But who would build those fleets?

The first thought is that city governments would do it. Some cities, looking for an edge in efficiency and services, have been open to innovation in public transportation. But many other cities—most of them, really—are cash-strapped and cautious about change. It’s also unclear how long it will take for Tesla, or anyone else, to get to full automation. So autonomous urban fleets may not be a massive market in the near- or even mid-term, though the longer-term potential is huge.

On the other hand, individuals still have intensely personal connections to cars, though that sentiment is arguably waning among younger Americans. Elon Musk has already more than proven he can build cars that tap into that passion. So it’s not a stretch to imagine that eventually Musk may make a slight tweak to the new master plan and develop a minibus for individual buyers; something that would end up at the higher end of the market, perhaps tailored for road-tripping retirees looking to ride into a flower-tinged, eco-friendly sunset.