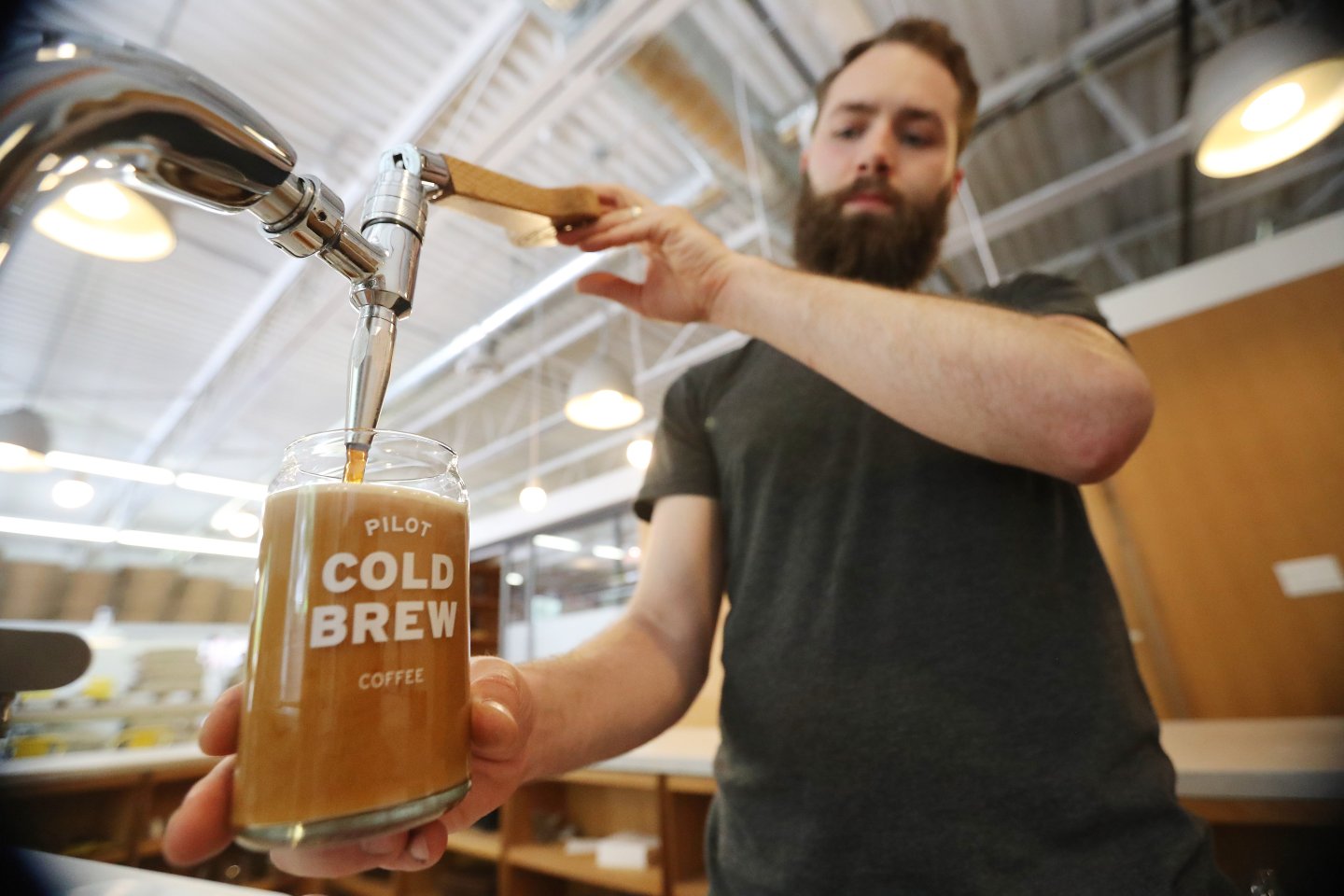 TORONTO, ON- JUNE 6: Pilot Cold Brew Coffee is made from a Guatemalan bean farmed at Catalan de las Mercedes launched six weeks ago. The brew, available on tap or in cans, pours looking like coffee and cream then settles to a dark coffee with a little head. in Toronto. (Steve Russell/Toronto Star via Getty Images)
Photo by Steve Russell —Toronto Star via Getty Images

You may think you’ve learned all of the coffee lingo you need when ordering from your local coffee shop. But these days the coffee dictionary is adding a few new entries: Cold brew, flat white, and nitrogen-infused coffee.

Cold brewing, a method of brewing coffee over a long period of time without heat, is supposed to offer a smoother beverage with less acidic taste. The flat white features whole milk and two ristretto shots, which are smaller, more concentrated serving of espresso. And nitro is a cold brew coffee—that’s infused with nitrogen gas, making it tastier.

Cold brew, in particular, is a trend that has taken off. Originating roughly five years ago at small outfits like Stumpton Coffee Roasters, it percolated in cities like Seattle and San Francisco, where coffee connoisseurs are drawn to new, supposedly richer coffee.

The trend has since accelerated as big players like Starbucks (SBUX) and Dunkin’ Brands (DNKN) plotted their own national launches. Just this week, Peet’s Coffee said it would launch a new slate of ready-to-drink drinks, initially addressing the San Francisco market before expanding to other regions down the road.

Starbucks has been especially aggressive in bringing cold brew to market — selling it at grocery stores, as well as the company’s restaurants. It began to tinker with cold brews in 2014 with small test runs in a few cities before expanding that version of coffee across the entire fleet of U.S. stores by the end of last summer. The chain has since introduced a vanilla-flavored cold brew coffee, as well as cold brew infused with nitrogen. Dunkin’ Donuts recently announced it would sell cold brew in restaurants in the New York and Los Angeles metro areas this summer, with a national launched planned later this year.

As with the “craft” industry that’s changing the beer industry, cold brew and other newer, innovative coffees are made with better ingredients and thus come with higher price points. On any menu that features cold brew, you’d find it costs a bit more than a regular iced coffee that’s the same size. For example, at a downtown Manhattan Starbucks, a grande-sized iced coffee costs $2.95 pretax versus $3.25 for a cold brew.

Is it worth the price? This reporter first tried cold brew two summers ago and wasn’t initially impressed. Since then, I’ve become more of a fan, often ordering a cold brew instead of an iced coffee. One thing I like about cold brew is that it is sweet enough that I don’t need to add an artificial sweetener (which I always add to my Americano).

“Premium experiences are less about the coffee itself and more from the process,” Jordan Rost, vice president of consumer insights at Nielsen, told Fortune. He said the cold brew trend, which has become more mainstream over the past two years, is alluring because it gives consumers a new option, especially when it comes to flavors and new preparation methods. And while it is more popular during the summer months, Rost says there are also increased sales occurring in the winter months, meaning the appeal is broadening.

Rost, however, says cold brew, nitro and other newer offerings are giving consumers more choice—especially as it relates to flavors and new preparation methods. And cold brew in particular could become a big hit at home. At a time when roasted coffee sales are waning, coffee purveyors could have more success getting consumers to make their own cold brew.

Cold brew isn’t just found at the neighborhood cafe these days. Grocery chains like Whole Foods (WFM) are stocking ready-to-drink options. There are also kits that can be used to make cold brew at home.

How big is this cold brew craze? The trend is so new that most research firms don’t track it as a separate category within the broader coffee world. Research firm Mintel estimates cold brew alone grew by 338.9% from 2010-2015. When combined with ready-to-drink coffee (which is prepared coffee in a bottle or can), the entire business is worth close to $2 billion in the U.S., and should continue to grow.

That growth is so alluring to coffee chains because the amount of people that drink coffee regularly actually hasn’t increased. Roasted coffee, in particular, is struggling with soft sales in recent years as consumers are lured by ready-to-drink coffees and espresso-based drinks. The roasted coffee segment, with about 44% of the total market, has also been hurt by single-cup methods popularized by Keurig Green Mountain.

There could be some barriers to make cold brewing the next latte. While Mintel tells Fortune consumers are certainly drinking more cold brew, expanding sales might be difficult. Last summer, it asked over 1,500 Internet users who do not drink cold brew if they were interested in that method of coffee. Only a third who hadn’t tried it expressed interest, while 58% said they had not tried it and they were not interested in tasting the beverage.

Research conducted by the National Coffee Association found that only 15% of consumers say they have tried a cold brew, while just 10% have tasted nitrogen carbonated coffee and 8% sipped on a flat white. By comparison, roughly 50% of consumers between 25 to 39 years old had drank an espresso-based beverage in the week preceding the survey by the NCA.

Still, experts say cold brew and other new offerings are giving coffee lovers more choice. And at a time when roasted coffee sales are waning, the industry could use a jolt of excitement.