The Incredible New Advances in the Fight Against HIV/AIDS 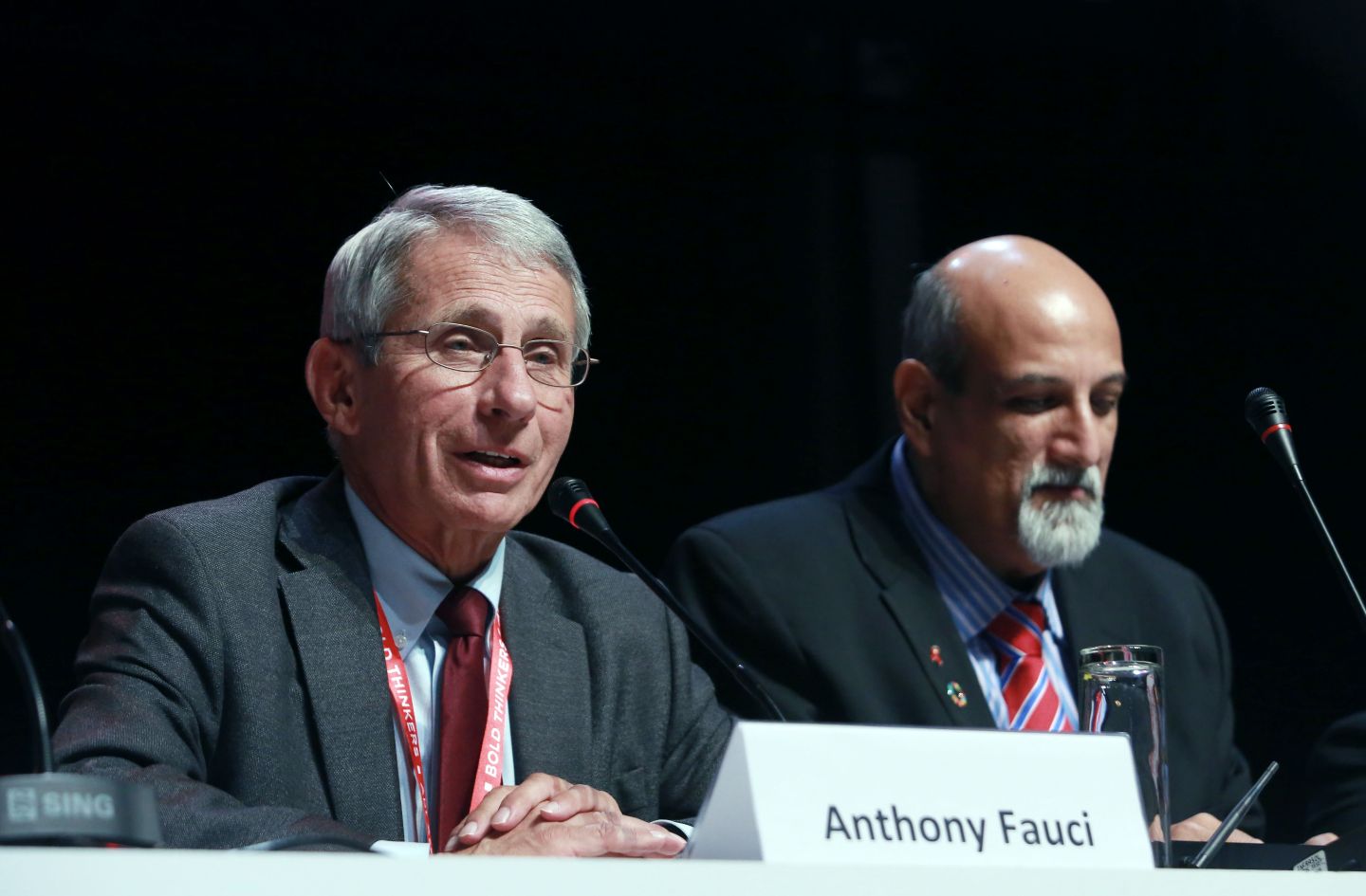 World renowned HIV researcher and winner of the Presidents Award from the International AIDS Society Anthony Fauci (L) flanked by South African scientist, epidemiologist and Director of Centre for the Aids Programme of Research (CAPRISA), Professor Salim Abdool Karim, delivers a speech at the conference on "Why do young women in Africa have high rates of HIV infection" during the second day of the 21st International AIDS conference in Durban on July 19, 2016. Promising results from an early safety trial with a potential HIV vaccine have paved the way for a major new study, researchers announced at the International AIDS Conference in Durban on July 19. An 18-month trial with a candidate vaccine dubbed HVTN100 drew on 252 participants at six sites in South Africa, one of the countries hardest-hit by an epidemic that has claimed more than 30 million lives worldwide since the 1980s. / AFP / RAJESH JANTILAL (Photo credit should read RAJESH JANTILAL/AFP/Getty Images)
Photograph by Rajesh Jantilal/AFP—via Getty Images

HIV/AIDS therapies have come a long way since 1987, when the first-ever drug, azidothymidine (AZT), was approved to fight the virus in the U.S. An explosion of advances in the field have changed the shape of treatment, enabling HIV-infected patients to live for years without symptoms with simple single-tablet treatment regimens.

Now, scientists have hopes for a functional cure –a cure that doesn’t wipe out every possible trace of HIV but keeps it at bay–and a potential vaccine. Here are some of the most promising advances in the field.

The experimental science surrounding HIV/AIDS has grown more sophisticated, including use of the revolutionary CRISPR-Cas9 gene-editing technique to target the virus’ very DNA and new trials for an HIV vaccine.

On July 19, during the 21st International AIDS Conference, National Institutes of Allergy and Infectious Disease director Anthony Fauci announced that the HIV vaccine ALVAC-HIV/gp120 will be tested in 5,400 people in South Africa as part of a wide-ranging new clinical trial beginning in November. The experimental vaccine had previously shown some promise in a 2009 trial in Thailand, but has since been modified to target more types of the virus and boost the immune system.

Researchers hope the vaccine will one day provide enduring 60% protection against HIV.

Killing Off HIV at the Genetic Level

For patients who have already contracted the virus, one of the hardest parts of treating infection is the way HIV integrates into cellular DNA and continues to replicate in different parts of the body even when it’s not clearly detectable. That’s why some researchers have targeted the HIV genome itself through CRISPR-Cas9—exciting new technology which can be used to slice off pre-targeted bits of DNA.

Read: The AIDS Activist and the Banker

The DNA-cutting Cas9 enzyme is directed toward the enemy HIV genome to destroy and remove it from immune cells under this method. Although there have been early hurdles to the approach (the virus mutated and managed to re-emerge in immune cells after several weeks in a McGill University study published in April), researchers believe that more sophisticated and multi-pronged attacks on the HIV genome combined with antiretroviral therapy could be key to eradicating infection.

One of Gilead Sciences’ (GILD) most effective, and controversial, avenues of fighting AIDS and HIV infection is a medication called Truvada. Approved in 2012, recent studies have shown that Truvada is highly effective as part of pre-exposure prophylaxis (PrEP)—a type of therapy which involves taking the pill daily in order to prevent HIV infection from happening in the first place.

PrEP with Truvada reduced the risk of HIV infection in the people at highest risk for contracting the virus by as much as 92%, according to the Centers for Disease Control (CDC).

However, PrEP has stoked concerns over expense and public health ethics. The method only works when the pill is taken every single day (without health insurance, out-of-pocket costs for PrEP can reach $13,000 per year) and some critics have noted that it might encourage riskier sexual behavior, such as forgoing condoms.