The Republicans Want Glass-Steagall Back 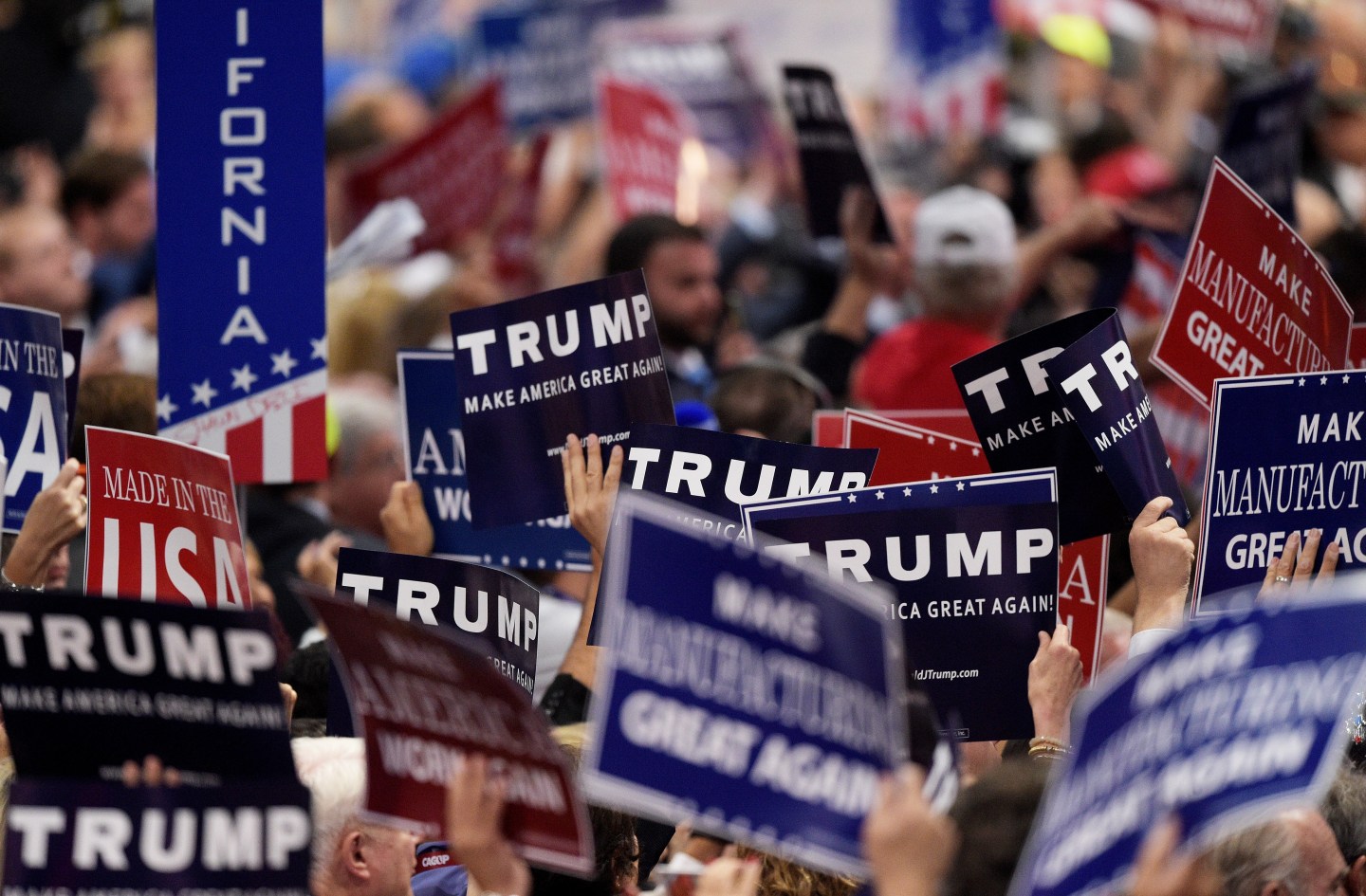 CLEVELAND, OH - JULY 19: Delegates celebrate after the Speaker of the House Paul Ryan announces the official nomination of Republican presidential candidate Donald Trump on the second day of the Republican National Convention on July 19, 2016 at the Quicken Loans Arena in Cleveland, Ohio. Republican presidential candidate Donald Trump received the number of votes needed to secure the party's nomination. An estimated 50,000 people are expected in Cleveland, including hundreds of protesters and members of the media. The four-day Republican National Convention kicked off on July 18. (Photo by Jeff Swensen/Getty Images)
Photo by Jeff Swensen—Getty Images

The Republican Party platform’s final version, released at the party’s convention in Cleveland, is the opposite of the Democrats’ platform in all the ways you’d expect and in one other way. While presumptive Democratic nominee Hillary Clinton speaks in snooze-inducing sentences, the platform is filled with fiery Bernie Sanders-style invective (“Democrats will fight against the greed and recklessness of Wall Street”).

By contrast, presumptive Republican nominee Donald Trump can scarcely open his mouth without scorching the audience’s ears, while the platform speaks mostly in soothing, measured tones. Look into the details, though, and you’ll find some surprises.

Last week, we examined the Dems’ platform for issues of greatest import to business leaders. Today, we do the same with the GOP platform, in both cases ignoring the sections on social policy, defense, etc.

-Much of the document rails predictably against federal regulation, but with an intriguing exception. In a paragraph excoriating the excesses of the EPA, the Department of Health and Human Services, the Labor Department, and the National Labor Relations Board, a paragraph that calls Dodd-Frank “the Democrats’ legislative Godzilla,” there’s this surprise: “We support reinstating the Glass-Steagall Act of 1933.” Irony No. 1: The defenders of economic liberty are advocating the revival of FDR-era federal regulation. Irony No. 2: The so-called “Party of Wall Street” wants to enact a law that Wall Street hates. Irony No. 3: Republicans want to re-regulate Wall Street by reversing deregulation that was championed and signed into law by Hillary Clinton’s husband.

-The platform nods to Trump’s strongly protectionist promises but leaves loads of wiggle room in delivering on them. “We need better negotiated trade agreements that put America first,” it says. “A Republican president will insist on parity in trade and stand ready to implement countervail­ing duties if other countries refuse to cooperate.” In other words, we’re ready to slap tariffs on Chinese imports, but we don’t have to. “We cannot allow China to continue its currency manipulation,” the platform says, without saying how to stop it. The vague statement “Significant trade agreements should not be rushed or undertaken in a Lame Duck Congress” is obviously code for “Don’t even think of acting on the Trans-Pacific Partnership before the Donald is sworn in.”

-On business taxes, the platform is clear. It would replace America’s global tax system with a territorial system along the lines of what every other developed economy uses. It favors lowering the tax rate and broadening the base by reducing deductions and “corporate welfare.” But how? It doesn’t say, and attempting to implement that policy would provoke a lobbying war.

-On personal taxes, the platform doesn’t endorse or oppose a VAT. It just says that adopting one must be contingent on repealing the Sixteenth Amendment, which authorizes the income tax. Similarly, the platform doesn’t explicitly call for lowering capital gains taxes. It says only, “We need to consider the effect of capital gains rates on the availability of venture capital.”

Party platforms are campaign documents, filled with loaded language, appeals to emotion, half-truths, and illogical arguments. In addition, nominees needn’t adhere to them. But reading them is illuminating. We’ll provide a link to the Democrats’ final version when it becomes available next week.