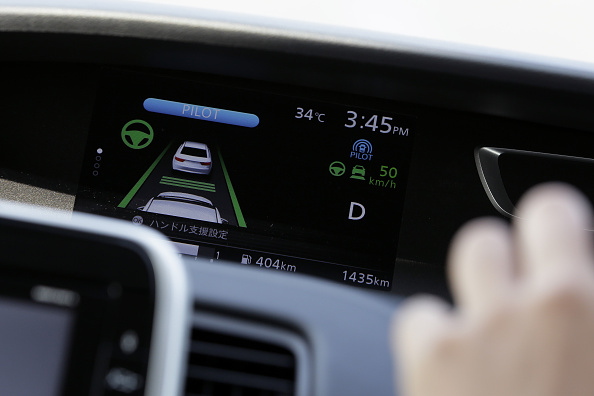 A monitor on the instrument panel of a Nissan Motor Co. Serena minivan displays the system information of the automaker's ProPilot autonomous-drive technology during a test drive at the Oppama Grandrive proving ground in Yokosuka, Kanagawa Prefecture, Japan, on Tuesday, July 12, 2016. Nissan introduced driver-assist features that enable its newest minivan to handle some highway driving on its own, just as a similar system from electric-car maker Tesla Motors Inc. comes under scrutiny following a number of crashes. Photographer: Kiyoshi Ota/Bloomberg via Getty Images
Photograph by Kiyoshi Ota – Bloomberg via Getty Images

As Internet-connected and, eventually, driverless vehicles roll off production lines, traditional motor insurers need to adapt to ward off competition from car manufacturers.

Insurers have struggled for years to make a profit from motor insurance due to intense competition and a rising tide of fraudulent claims. Now they face a much bigger threat as new technology sends key information about drivers’ behavior, including their speed when an accident occurred, directly to car makers.

Kenny Leitch, telematics director at British insurer RSA, said car manufacturers will want to offer insurance directly to car owners to remove the risk of a Jaguar, for example, being sent for repair and the insurer replacing it with a courtesy BMW – which the driver ultimately prefers.

“You can see them trying to grab control, they do not want insurers taking control,” he said.

RSA is in discussions with car manufacturers on ways they can work together and “we will keep talking to them”, Leitch said.

One way forward for insurers is joint partnerships.

Japan’s Toyota Motor (TM) and Aioi Nissay Dowa Insurance, for example, are planning to jointly develop car insurance based on a driver’s habits.

Car manufacturers, including Jaguar Land Rover, BMW, Ford and General Motors (GM), are already making cars that are hooked up to smartphones, letting drivers do everything from honking the horn remotely to recording the force with which they brake and accelerate.

The data from these connections could then be used to price insurance policies.

Insurers, traditionally slow to embrace technology, need to catch up.

“Insurance is in the stone ages, while people are circling Mars in spaceships in other industries,” said Mark Wilson, chief executive of British insurer Aviva. It has opened a digital hub to generate new product ideas and make them more accessible via tablet and smartphone in London’s trendy Hoxton area, home to many tech firms.

“We need to build our own spaceship,” said Wilson.

Insurers are also using telematics – black boxes installed in cars – to monitor behavior on the road and lure safer drivers with lower premiums.

Between 2013 and 2015 the number of policies using telematics tripled in the United States to 6.8 million, and more than doubled in Europe to 5.1 million, according to consulting firm Ptolemus.

The advent of driverless cars, however, could tilt the balance further in the direction of manufacturers.

At $500 billion plus, the global motor insurance market is large but Graham Jackson, a partner at consultancy PwC, warns of the threat of an “existential crisis” for insurers.

Volvo Car Group will test its driverless cars in London next year. Volvo, Mercedes and Google have said they will take liability for accidents in their driverless cars, potentially meaning car owners will only need insurance for fire and theft.

“As the car becomes more autonomous … we believe more of the liability will be absorbed by the manufacturer or the entity that has made the algorithms behind the brain of the car,” said Jerry Albright, principal in KPMG’s actuarial and insurance risk practice.

“At one point, does that become such a large portion that carmakers say,’we will insure all these cars’?”

A 2015 KPMG report suggests the personal car insurance sector could shrink to 40 percent of its current size within 25 years. In addition to manufacturers taking liability, the number of accidents should drop as driverless cars take off, reducing insurance premiums, KPMG says.

Insurers see their biggest threat as Alphabet Inc’s Google because of its strong brand and ability to use customer data, according to consultancy Capgemini.

“Companies like Google are expert at protecting value,” said Jackson at PwC. “If there is profit to be made from underwriting, they will underwrite.”

But others are less sure Google will be willing to enter the highly regulated insurance sector, pointing to its recent exit from running an insurance comparison website.

The insurance industry, which started life in London in 1688 in Edward Lloyd’s coffee house, has already coped with the arrival of the car, the plane, and the space rocket.

It could adapt again, industry specialists say, by offering cyber insurance against the hacking of connected or driverless cars, or liability cover to car manufacturers.

“I don’t think insurers are panicking,” said Kymberly Kochis, partner at law firm Sutherland Asbill & Brennan’s New York office. “I don’t think this will cause the demise of auto insurance – this is an area for insurance companies to watch.”