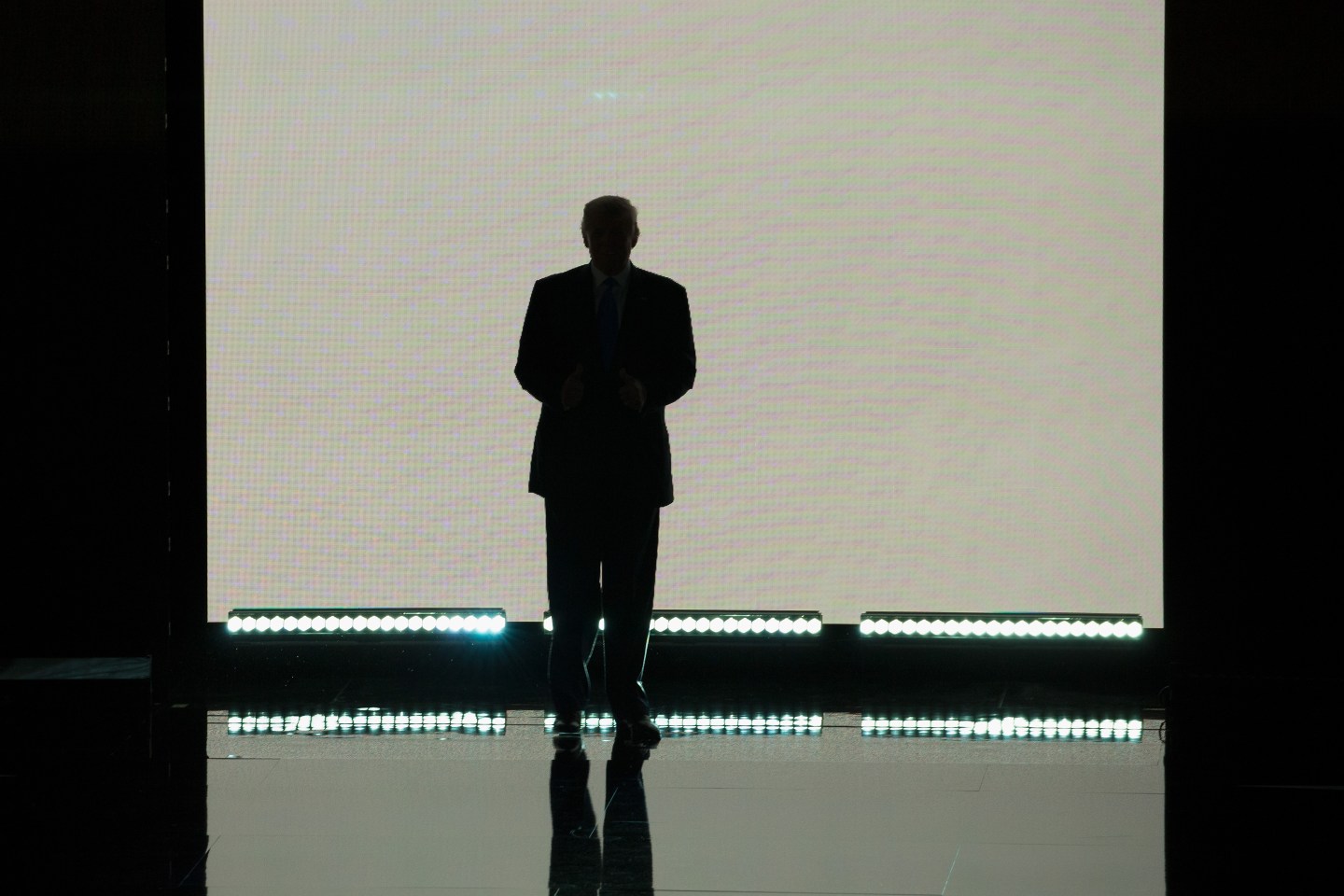 CLEVELAND, OH - JULY 18: Republican presidential candidate Donald Trump walks on stage during the Republican National Convention at Quicken Loans Arena on July 18, 2016 in Cleveland, Ohio. An estimated 50,000 people are expected in Cleveland, including hundreds of protestors and members of the media. The convention runs through July 21. (Photo by Tasos Katopodis/WireImage)
Tasos Katopodis — WireImage/Getty Images

Deepak Malhotra is the Eli Goldston Professor of business administration at Harvard Business School, and author of Negotiating the Impossible. Don Moore is the Lorraine Tyson Mitchell Professor of leadership and communication at the Haas School of Business.

With the Republican National Convention underway, Donald Trump’s negotiating skills will be put to the test as he tries to unify a severely divided party and stem the tide of his fall in popularity. Already, in recent weeks, Trump has been accused of propagating anti-Semitic imagery, alienating sponsors of the Republican National Convention, and failing to explain why it is acceptable for his vice-presidential pick, Mike Pence, to have supported the Iraq war, but not for Hillary Clinton to have done the same. Trump has also had to endure a growing list of Republicans who have questioned his qualifications, along with more unfavorable poll numbers. Nevertheless, his polling strength persists on questions regarding the economy. As Clinton enters the general election campaign, she has criticized Trump’s economic agenda. But if history is any guide, simply attacking his policies will have limited impact. There is a more important issue she needs to tackle first.

Whenever Trump has shown ignorance or confusion on domestic or foreign policy issues, he has fallen back on the argument that, as a brilliant dealmaker, he has what it takes to “make America great again.” He says he would do this by renegotiating the Trans-Pacific Partnership (TPP), relations with China, the Iran nuclear deal, and partnerships with key allies such as NATO, Japan, and South Korea. If Clinton is to prevail against Trump’s perceived business qualifications and deal-making savvy, she’ll have to dismantle the painstakingly cultivated image of Trump as a great negotiator.

The two of us have studied negotiation for a combined 40 years, have taught tens of thousands of students and executives, and advised on countless corporate and government negotiations. Because we would welcome a great negotiator as president, we were keenly interested in examining the evidence of Trump’s negotiation prowess. We evaluated his wealth, his deals, and his approach to negotiation. The evidence is damning.

Let’s start with his wealth. Trump boasts, “I have made myself very rich.” Credible objective sources estimate his net worth at between $2.9 and $4.1 billion. While wealth is a poor measure of deal-making skill (Bernie Madoff was richer than Trump), there is special reason to doubt that Trump’s wealth can be traced to negotiation ability. It’s been estimated that if Trump had simply invested his current net worth from 1982 (built atop the fortune he received from his father) in an S&P 500 index fund and made no deals, he would have $8 billion now. In other words, Trump’s deal-making over the last quarter century has actually cost him billions of dollars.

It’s easy to identify examples that belie Trump’s claim that he is an excellent deal-maker. The airline he bought in 1988 for roughly $365 million closed down in 1992. The football team he bought in 1984 ended with the demise of United States Football League just two years later. His hotels and casinos have struggled to make money, declaring bankruptcy four times. Ironically, even Trump’s version of how skillfully he renegotiated loan terms with his bankers after going bankrupt has been debunked by those who were at the table.

Even on the campaign trail, we have seen obvious negotiation failures. By one estimate, the Trump campaign paid three times what the Sanders campaign did to run commercials during the same time slots on the same stations. Meanwhile, he has undermined numerous other deals. Both NBC and Univision declined to air Trump’s Miss USA pageant last year after he disparaged Mexican immigrants. Companies in the Arab world have severed ties with Trump after his comments about Muslims. At home, there’s a long list of U.S. companies that have severed or loosened ties with the Republican National Convention.

Some might defend his impolitic behavior by arguing that he was astutely sacrificing profit in order to win votes, but that argument falls flat. Trump started offending people and losing deals well before he began his campaign for president. Consider what was supposed to have been his most important deal: developing Manhattan’s West Side Yards, then the largest undeveloped property in New York City. The negotiations with public, private, and regulatory stakeholders devolved into a vulgar exchange of insults between Trump and then-New York Mayor Ed Koch. Trump was ultimately forced to sell to a group of Chinese financiers in a deal The New York Times described as “perhaps the closest that Mr. Trump has come to international diplomacy.” But the negotiation left Trump so angry at his Chinese partners that he later sued for $1 billion. The court ruled against him.

These failures and losses beg the question: What exactly is Trump’s approach to negotiation? His book, The Art of the Deal, contains many platitudes, but only one distinctive strategy: Fake it till you make it. Trump recounts a 1982 deal in which he was courting a skeptical investor. He told his construction manager to hire additional people and equipment to create the illusion of progress during the investor’s visit: “What the bulldozers and dump trucks did wasn’t important, I said, so long as they did a lot of it.” The trick worked. And he has not stopped using it since.

Trump has now crafted his own neo-Orwellian approach to politics, substituting the impregnability of blatant contradiction with the allure of unapologetic self-confidence. “I play to people’s fantasies,” Trump says in the book. “People may not always think big themselves, but they can still get very excited by those who do. That’s why a little hyperbole never hurts. People want to believe that something is the biggest and the greatest and the most spectacular. I call it truthful hyperbole.” In the short term, such bravado can help leaders gain support, as we have witnessed in Trump’s ascendancy during the primaries. But that support withers when the veneer of self-assurance slips to reveal reckless overconfidence and a lack of substance. Trump’s co-author on The Art of the Deal, Tony Schwartz—who apparently wrote almost the entire book himself—has now conceded that he worked hard to ignore all of the evidence of Trump’s poor deal-making, and “put lipstick on a pig” to create the image of Trump as a great negotiator.

The evidence is clear. If Trump still somehow manages to prevail in November, he will not be the first charlatan or confidence man to have profited from the long con. The art of illusion he knows well. The art of the deal he does not.