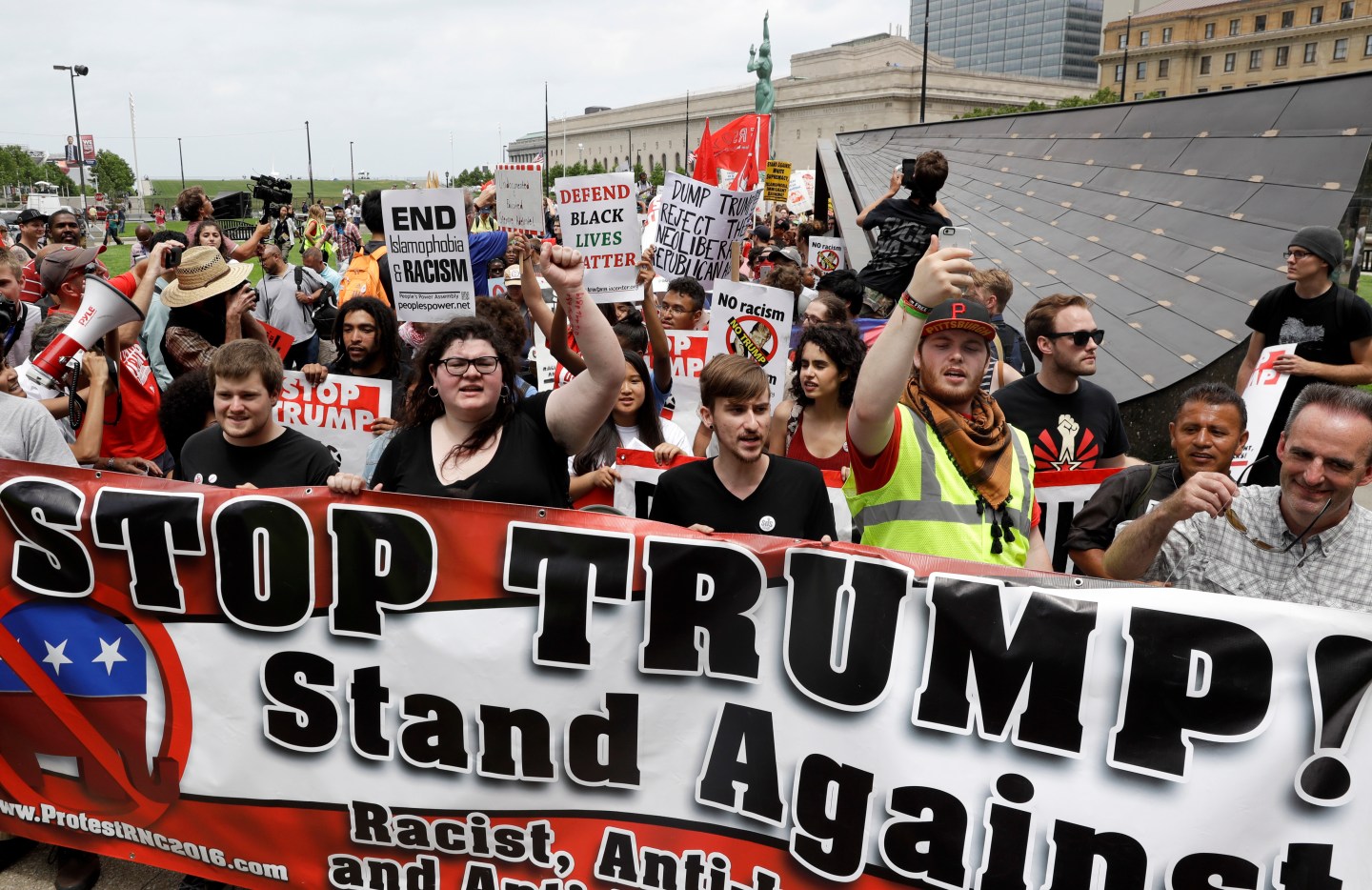 The first day of rallies outside the Republican National Convention featured angry rhetoric, armed attendees and an arrest, but authorities avoided the sort of violence they fear could still flare up.

Williams said bicycle officers moved in several times to keep sniping between groups from becoming violent. The one arrest Monday involved a person on the city’s Public Square who had a felony warrant and also is being charged with resisting arrest and obstructing official business.

The riverside pro-Trump rally attracted about a dozen attendees who showed up with handguns strapped to their belts as allowed under Ohio law. Blocks away, protesters shouted about police mistreatment.

“With all that’s going on in society today, whether it’s Nice or London or what’s happening in our own black and brown communities, there’s a fear of mobilizing. But I think the protests are important, whether they’re huge or small,” said Teresa Gutierrez, who travelled from New York City to attend anti-Trump protests.

People along the streets showered police officers with applause, hugs and a few insults.

About 600 Cleveland officers were assigned to convention security duty along with thousands of officers from other agencies. Among them: Homeland Security investigators, Customs and Border Protection personnel, Coast Guard members, and the Ohio National Guard.

Among those at the pro-Trump rally was Joel Ameigh, of Hershey, Pennsylvania, who had a Smith & Wesson handgun on his belt.

The president of the police union on Sunday asked Ohio Gov. John Kasich to suspend the law allowing gun owners to carry firearms in plain sight. But the Republican governor said he didn’t have the authority.

The request came as the deadly truck attack in France and the ambush killings of five police officers earlier this month in Dallas and three more in Baton Rouge, Louisiana, over the weekend heightened fears of bloodshed in Cleveland.

“Frankly, that impact will probably help the campaign because it’s going to show again, you know, lawlessness, a lack of respect for political discourse,” he said shortly before the convention officially began.

There was at least one dust-up, involving right-wing religious demonstrators who got into a shouting match with some of the anti-Trump protesters.

And police arrested one woman on an outstanding warrant after she jumped on a public stage downtown and grabbed a microphone from a speaker, according to city officials, who did not immediately have details.

On the anti-Trump side, several hundred people chanted “Dump Trump now!” and held signs saying things like “No racism, no fascism, no Trump” as they marched through the streets.

Many were upset with the Republican presidential candidate’s stand on immigration, including his proposal to build a wall at the Mexican border and his call for barring Muslims from entering the U.S. The demonstrators also decried what they called racist police practices.

Officers on bicycles and Indiana state troopers on convention security duty stood off to the side while a black speaker complained about police mistreatment.

Cleveland patrolman Bohdan Roshetsky, an eight-year veteran, said that after the recent shootings, “our awareness is extremely high.”

He said he was surprised by an outpouring of support from people on Monday, including hugs and requests for pictures.

“I’ve been brought to tears numerous times riding around on the bike, seeing them cheering, clapping, thanking us for being there,” he said.

Even protesters complaining about police tactics were being respectful, he said. “Nobody’s been nasty to us,” he said.

Across town, the rap metal supergroup Prophets of Rage played a 30-minute concert for a sparse crowd in Cleveland’s Public Square to protest the “racism, sexism and imperialism” in the Republican platform.

“Out here, human rights, respect for the planet and resistance to oppression is what we sing about,” the group’s Tom Morello told an audience of about 200.