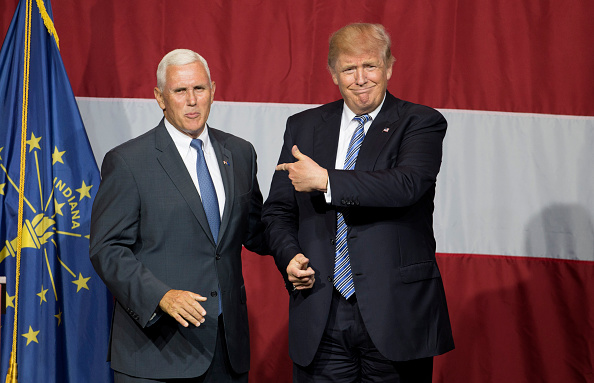 Update: Donald Trump confirmed on Friday that he has selected Gov. Pence to be his running mate.

Trump has called climate change a hoax and promised to gut U.S. environmental regulations in order to help the ailing oil and coal sectors. A Trump-Pence ticket would quash any expectation that the New York businessman might soften that stance heading into the Nov. 8 election.

“We would hope to see a continuation,” she said.

Advisers to Trump’s campaign have told Republican officials he picked Pence, 57, as his vice presidential running mate, two Republican sources said, but Trump officials said he had not yet made a final decision. Trump is due to announce his choice on Friday morning.

Pence is listed on Obama’s “call out the climate change deniers” website for arguing that the science behind climate change has not yet been resolved.

In June 2015, Pence wrote to Obama saying that Indiana, America’s eighth largest coal-producing state, would not comply with the Clean Power Plan regulating power plant emissions, calling it “ill-advised.” Indiana is one of more than 25 states that have challenged the centerpiece of Obama’s environmental agenda.

In 2014, Pence alarmed local environmental groups by overturning an energy efficiency program enacted by his Republican predecessor, Mitch Daniels, saying it was too expensive for the state’s manufacturers. The Indiana Public Utility Commission had estimated the program would create more than 18,600 jobs.

“The choice of Pence shows Trump has little interest in appealing to anyone outside of his extremist base and Big Polluters,” said Clay Schroers, a director at the League of Conservation Voters environmental group.

Trump has long signaled his support of traditional energy production – part of his broader appeal to blue-collar American voters.

He outlined plans in May to sweep away environmental regulations ushered in by Obama, scrap the Paris Climate Accord, and revive the Keystone XL pipeline proposal – moves that would reverse years of gains by the green movement.

His Democratic rival, Hillary Clinton, in contrast, has promised more stringent regulation of the energy sector, efforts to boost renewable fuels use, and a commitment to join other nations to combat global climate change.

Pence ran for governor in 2012 after serving in the U.S. Congress. His campaign for governor received more than $850,000 from the energy sector, about 3 percent of the total, according to campaign finance disclosures.

More than $300,000 of that came from the billionaire Koch brothers, strong advocates of small government and fiscal conservatism who took a liking to Pence.

Both David and Charles Koch have said they will not support the Trump ticket. Trump has alarmed many Republican establishment figures with his fiery rhetoric on immigration and trade.

But a former high-ranking operative in the Koch political organization who is close to both brothers said Pence could help make the donor network more receptive to Trump’s campaign.