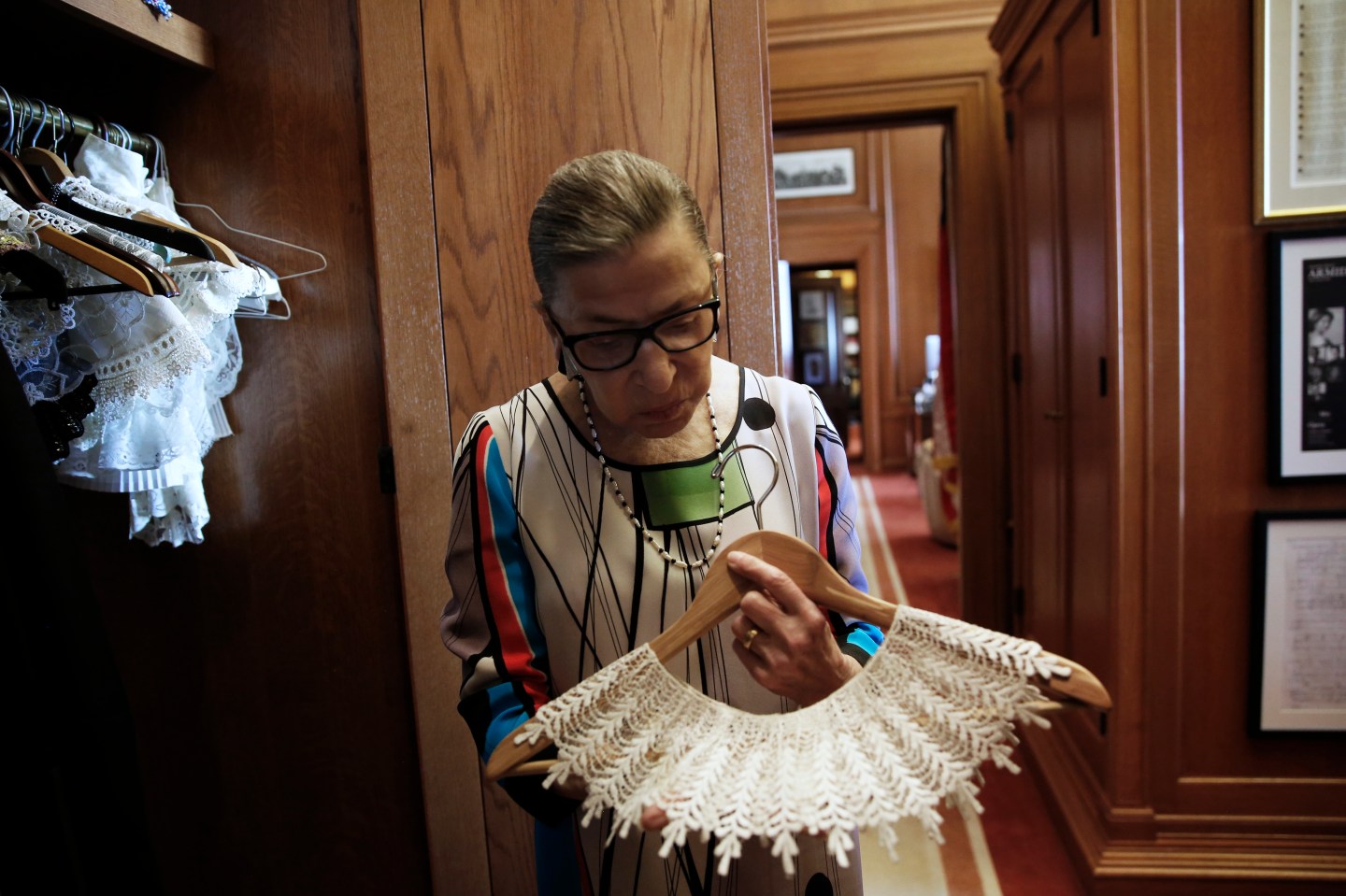 U.S. Supreme Court Justice Ruth Bader Ginsburg shows the many different collars (jabots) she wears with her robes, in her chambers at the Supreme Court building in Washington, U.S. June 17, 2016. REUTERS/Jonathan Ernst SEARCH "SCOTUS" FOR THIS STORY. THE IMAGES SHOULD ONLY BE USED TOGETHER WITH THE STORY - NO STAND-ALONE USES. IMAGE FOR USE AND PUBLICATION ONLY AS PART OF REUTERS SUPREME COURT "Marble, drape and justice: inside the U.S. Supreme Court" PHOTO ESSAY UNTIL AFTER OCTOBER 1, 2017. - RTX2HM5Z
Jonathan Ernst — Reuters

Every once in awhile you get served up a softball: a controversy that’s an easy one. U.S. Supreme Court Justice Ruth Bader Ginsburg’s two interviews this week taking overt, breezy, banal pots shots at presumptive Republican nominee Donald Trump—one to Adam Liptak of the New York Times and another to CNN legal analyst Joan Biskupic—were inappropriate.

Ginsburg’s remarks were, in fact, so inappropriate that a startlingly high percentage of Trump’s truculent remarks and tweets in response have been fair and reasonable under the circumstances. Basically, all the ones I’ve heard so far have been plausible except those suggesting that “her mind is shot,” that she’s a “disgrace,” and that she should “resign.” (On Thursday, she issued a statement saying that, “on reflection,” her remarks were “ill-advised” and “I regret making them.”)

Even the @NYTimes and @WashingtonPost Editorial Boards condemned Justice Ginsburg for her ethical and legal breach. What was she thinking?

Is Supreme Court Justice Ruth Bader Ginsburg going to apologize to me for her misconduct? Big mistake by an incompetent judge!

Justice Ginsburg of the U.S. Supreme Court has embarrassed all by making very dumb political statements about me. Her mind is shot – resign!

Ginsburg’s slip up does not mean she’s lost it. It also doesn’t mean, as the Wall Street Journal editorial board opportunistically suggested Thursday, that she must now recuse herself from all cases relating to voting and executive power. That argument overlooks a line of other unfortunate behavioral precedents set in this area. For example, Justice Clarence Thomas and the late Justice Antonin Scalia made appearances as “featured guests” at retreats sponsored by financiers Charles and David Koch, leaders of the private oil company Koch Industries and major backers of conservative and libertarian political causes. The ‘recuse’ camp also overlooks Justice Scalia’s notorious 2011 duck-hunting trip with a group that included his longtime friend, then-Vice President Dick Cheney, shortly after the Court had agreed to hear a case relating to a Cheney-led energy task force. “I never hunted in the same blind as the vice president,” wrote Scalia, refusing to recuse himself.

Nevertheless, Ginsburg’s remarks are deeply unfortunate, and do further tarnish an institution whose credibility is already drowning in politicization, too much of it self-inflicted. Though some liberal academics have gamely come to her defense, admiring her feistiness and arguing that norms are changing, they’re wrong. As professor Gerard N. Magliocca of Indiana University’s law school wrote on the Balkinization blog Tuesday, “Suppose that tomorrow Chief Justice Roberts gave an interview in which he said, ‘Hillary Clinton—what a liar! That private email server looked awfully fishy to me. . . .’ Would anyone applaud him for his ‘candor’ or ‘courage’? Of course not. He would be rightly pilloried as a partisan hack.”

To review, here’s what happened. In a Times article that appeared Sunday, Ginsburg said, “I can’t imagine what the country would be — with Donald Trump as our president. . . . For the country, it could be four years. For the court, it could be — I don’t even want to contemplate that.” It reminded her of what her husband would have said, she told Liptak: “Now it’s time for us to move to New Zealand.”

She doubled down in a CNN interview with Biskupic Tuesday, calling Trump “a faker,” saying “he has no consistency about him. He says whatever comes into his head at the moment. He really has an ego. … How has he gotten away with not turning over his tax returns?”

In what may be the highest number of consecutive Trump sentences I’ve ever agreed with, the presumptive GOP nominee responded to the Times:

“I think it’s highly inappropriate that a United States Supreme Court judge gets involved in a political campaign, frankly. I think it’s a disgrace to the court and I think she should apologize to the court. I couldn’t believe it when I saw it. . . . It’s so beneath the court for her to be making statements like that. It only energizes my base even more.”

One problem with what Ginsburg said is the painfully obvious hypothetical that several commentators have raised: What if the 2016 election ends the way the 2000 election did, with the contest being litigated up to the U.S. Supreme Court for an reprise of Bush v. Gore? Would she have to recuse herself?

Well, she wouldn’t literally have to, because there’s no authority with the power to force a Supreme Court justice to recuse him or herself if the justice chooses not to. But if she didn’t, the institution’s credibility would take its biggest drubbing since, well, Bush v. Gore.

Her remarks would have clearly led to sanction had they been voiced by any federal judge other a Supreme Court justice, since they would have violated Canon 5 of the Judicial Code of Conduct: “A judge should not … (2) publicly endorse or oppose a candidate for public office.”

But justices aren’t bound by the canons since their qualifications are set solely by Article III of the Constitution.

So is she losing it? Her characteristically tart, well-crafted opinions and dissents this term definitively set to rest such a claim. Yet while senility is not an issue, age may have something to do with her remarks. As people approach mortality—Ginsburg is now 83—they do have a tendency to get blunt; there remain few reasons to hold back, and the temptation must become acute when you enjoy lifetime tenure.

Ginsburg’s remarks also reflect that, like many establishment Republican politicians now struggling over whether to support Trump, she sees this election as a highly unusual one, which it is. It’s not the red team versus the blue team this year; it’s the whole league versus a drunk fan running out on the field. Comedian John Oliver captured the depth of the chill fears looming over this race when he quipped that Trump might not only be our next president, but our last.

There’s little question that Trump is different. Respected conservative and, ordinarily, Republican analysts have argued that he:

Journalists have also been hard-pressed to maintain the conventional patina of dispassion in this context. Trump has not only lashed out at them personally—which is, after all, a familiar strategy for a subset of Republican candidates—but has mocked their physical handicaps and urged that landmark First Amendment press protections established since 1964 by New York Times v. Sullivan be curtailed.

No matter. It was the wrong thing to do. She furthered the perception that the Court is just a complement of politicians in robes—a view that fuels the political stalemate that has left the Court’s ninth seat vacant and hobbled its ability this term to perform its most basic constitutional functions.

This magazine honored Justice Ginsburg earlier this year—fittingly—as one of the world’s 50 greatest leaders. There we praised her, among other things, for the respect she always showed to her close friend and ideological opposite Justice Scalia. “In a political season when one could question our capacity and even desire to find common ground with those having opposing viewpoints,” Fortune wrote, “Ginsburg serves as an example for us all in her ability to connect in the service of a mission more significant that one’s self interest.”

In the past week she’s screwed up big time, and undermined that goal. That means she’s human, not that she’s senile. We chastise the mistake, and now we move on.

As her friend Justice Scalia said innumerable times when asked to defend the Court’s controversial actions in Bush v. Gore: “Get over it.”