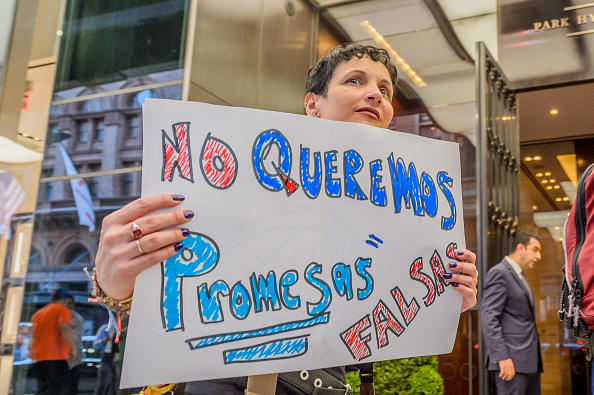 PARK HYATT HOTEL, NEW YORK, UNITED STATES - 2016/06/29: Puerto Ricans in New York gathered ouside the Park Hyatt Hotel in Manhattan to tell corporate vultures that Puerto Rico is not a tax shelter. The Puerto Rico Tax Incentive Conference is promoting Puerto Rico as an ideal investment destination based on the tax incentives afforded to the rich. This conference is happening while millions of working families suffer hardship due to severe cuts in public services. (Photo by Erik McGregor/Pacific Press/LightRocket via Getty Images)
Pacific Press LightRocket via Getty Images

Puerto Rico, the U.S. commonwealth that recently declared a historic default, could be shut out of debt markets for two more years as it battles with fiscal challenges, the island’s governor said on Tuesday.

Governor Alejandro Garcia Padilla said emergency fiscal measures in response to a $70 billion debt were not sustainable and that “Puerto Rico will not endure any more austerity.”

He said a new law enacted by Washington allowing the federal government to appoint a control board would undercut self-government, but added it would help the island confront its fiscal problems.

“Our challenges are not over and prosperity will not return overnight,” the governor said during a discussion at the Brookings Institution, a think tank in Washington.

“It will take maybe two years until the market opens back to Puerto Rico if we do the right thing,” Garcia Padilla said, adding the government had been producing fiscally sound budgets that would help win back creditors. The island has been shut out of debt markets for about a year.

Citing falling debt levels, he said it was a “moment of opportunity” in Puerto Rico, which has struggled with high debt loads and a weak economy for years.

Puerto Rico defaulted on $779 million of constitutionally backed debt on July 1, among its most senior bonds, opting to pay for essential services for its citizens over obligations to creditors.

Garcia Padilla said the Puerto Rican government would take steps on its own to get its fiscal affairs in order, therefore minimizing meddling by the oversight board.

For example, he said that if the island’s government passed responsible budgets on its own, the control board would not need to impose its own fiscal plans.

Garcia Padilla said, however, that while the government must become more efficient to improve its fiscal situation, that should be done through attrition rather than laying off workers.