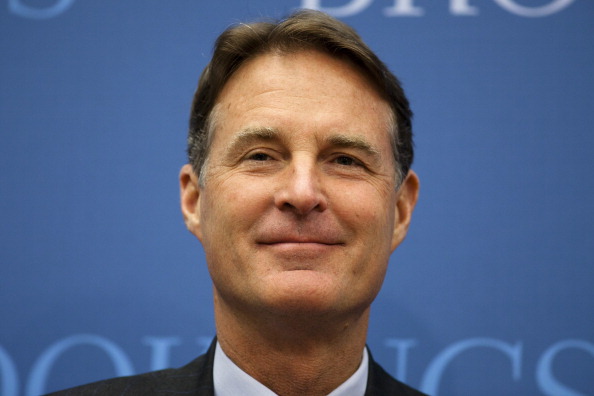 Former Senator Evan Bayh, a Democrat from Indiana, smiles during an event at the Brookings Institute in Washington, D.C., U.S., on Wednesday, Jan. 12, 2011. Panelists discussed how to build a long-term national strategy for U.S. economic growth based on innovation. Photographer: Brendan Hoffman/Bloomberg via Getty Images
Bloomberg via Getty Images

Democrat Evan Bayh launched a bid Wednesday to recapture the Indiana Senate seat he left six years ago, a move that boosts his party’s chances to pick up the GOP-held seat in their effort to regain control of the chamber this fall.

Bayh, who retired in 2010 following two Senate terms, announced that he would seek to make a political comeback two days after former U.S. Rep. Baron Hill cleared the way by withdrawing as the Democratic nominee.

Bayh released a statement acknowledging his complaints about Capitol Hill gridlock when he left office.

“With the challenges facing Indiana and our country, I can no longer sit on the sidelines and watch as partisan bickering grinds Washington to a halt,” Bayh said. “Hoosier families deserve more and I’ve decided to run to take their cause to the U.S. Senate.”

Bayh’s return boosts the chances of Democrats to win the seat now held by Republican Sen. Dan Coats, who is retiring.

National Democrats have pushed for Bayh to enter the race, seeing him as having a better chance to defeat GOP candidate U.S. Rep. Todd Young, who doesn’t have Bayh’s name recognition or campaign cash.

Republicans have already attacked Bayh for remaining in Washington, where he has been partner at the McGuireWoods law firm and joined several corporate boards.

Democrats need to net four or five seats to win back Senate control — four if they hang onto the White House and can send the vice president to break ties in the Senate; five if they don’t. With a handful of competitive races around the country, one seat can make all the difference, and putting Indiana in play could be crucial.

Even if Bayh can’t win his old seat back, his candidacy would force Republicans to spend money in a state they had no plans to invest in. The latest federal reports show that Bayh had nearly $9.3 million in his campaign account at the end of March, while Young’s campaign announced Monday that he had about $1.2 million in the bank on June 30.

Bayh’s absence from politics won’t hurt him much despite the Indiana trending Republican in recent years, said former Fort Wayne Mayor Paul Helmke, a Republican who lost to Bayh in the 1998 Senate race.

“All the sudden Todd Young has gone from being the favorite to being the underdog,” said Helmke, an Indiana University public affairs professor. “All the sudden, rather than being in a positon where they have a money advantage, they have a disadvantage.”

While Republicans are attacking Bayh for living and working in Washington after leaving the Senate, Helmke pointed out that Coats survived similar criticism from Democrats in 2010 when he made his own Senate comeback after 12 years out of office.