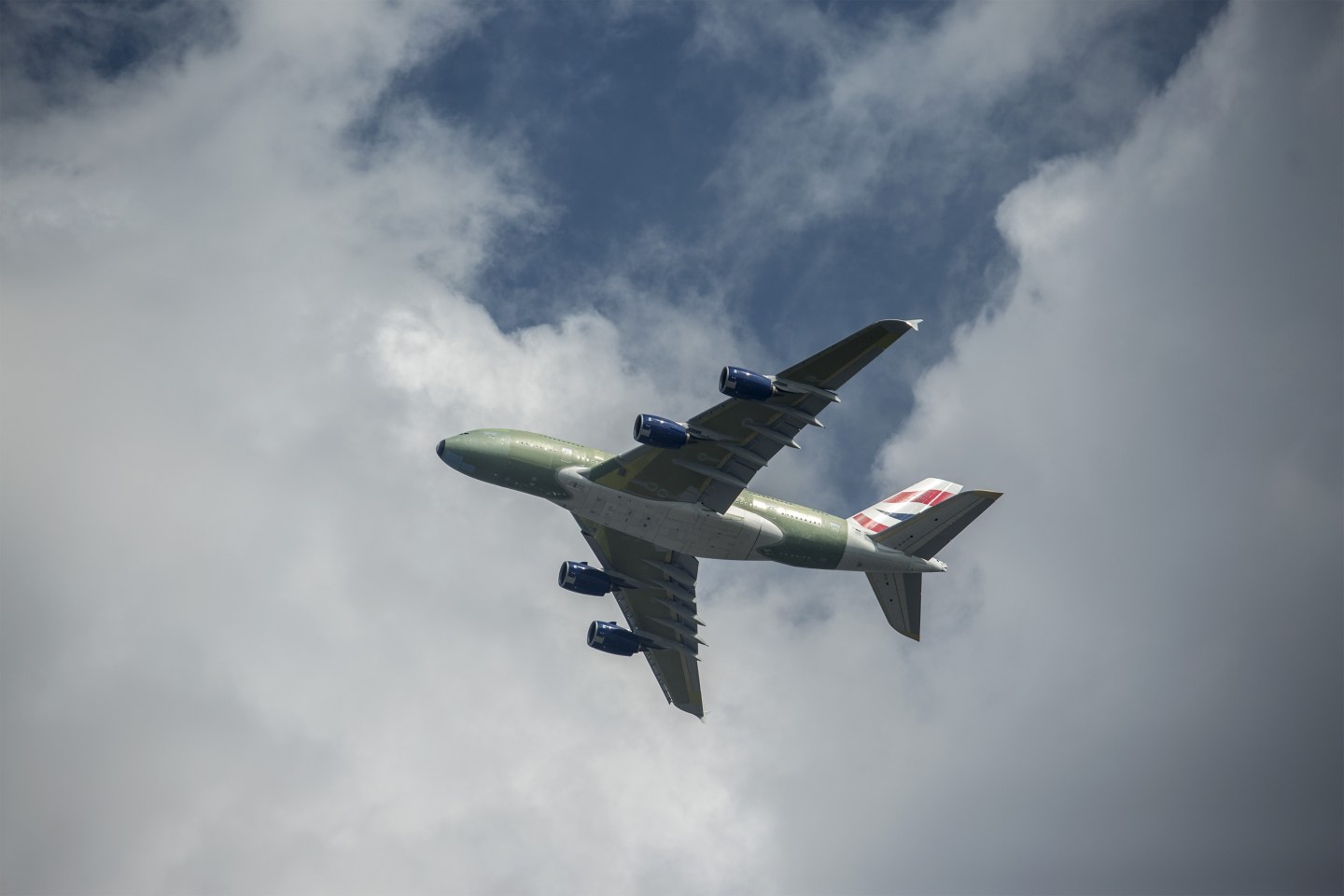 A part-painted British Airways Airbus A380 aircraft, manufactured by Airbus Group NV, takes off from Toulouse-Blagnac airport in Toulouse, France, on Thursday, Sept. 25, 2014. The Toulouse, France-based manufacturer's long-term forecast predicts demand for almost 9,300 wide-body planes worth $2.5 trillion -- 1,500 of those in the 400-seat-plus bracket occupied by the A380 -- and more than 22,000 single-aisle planes valued at $2.1 trillion in the market dominated by the A320 and Chicago-based Boeing's 737. Photographer: Balint Porneczi/Bloomberg via Getty Images
Photograph by Balint Porneczi/Bloomberg/Getty Images

Europe’s Airbus on Tuesday cut the delivery target for its A380 superjumbo to 12 a year from 2018, down from 27 in 2015 and about half what is projected for this year, to prevent a glut of unsold planes as airlines shun the industry’s behemoths.

It announced the cutback late on the second day of the Farnborough Airshow, taking the shine off a $20 billion haul of orders for smaller jets, after the decision was reported in French newspaper La Tribune.

The move raises the possibility that Airbus (EADSY) could revert to losses on the double-decker jet after breaking even for the first time last year, but averts the need to start ordering parts for unsold planes: something it has pledged not to do. Parts for A380s must be ordered up to two years ahead.

Airbus said it would still break even with 20 deliveries next year, but gave no specific commitment beyond that.

“The company will continue to improve the efficiency of its industrial system to achieve breakeven at 20 aircraft in 2017 and targets additional cost reduction initiatives to lower breakeven further,” Airbus said in a statement.

Sales of large four-engine airliners like the 544-seat A380 have been hit hard by improvements in the range and efficiency of smaller two-engined models, which can be easier to fill.

The trend became starker on Monday when one of the mammoth plane’s earliest advocates, Richard Branson’s Virgin Atlantic, opted for 12 of Airbus’s A350-1000 twin-engined jets after progressively shelving its longstanding order for A380s.

Airbus chief Fabrice Bregier insisted the aircraft was “here to stay,” while sales chief John Leahy said earlier he was talking to some potential A380 buyers.

It is the second time that Airbus has moved to cut production of the A380, reflecting a more hard-nosed attitude to a jet hailed at its birth as a European industrial symbol.

“We just took this decision; it is business driven. The focus is now on maintaining breakeven,” said a senior executive.

In April, Reuters reported it had asked suppliers to slow production to support a production assembly rate of 1.7 a month from 2017 from just over 2 a month, equating to 19.6 deliveries a year after adjusting for European holidays.

Planemakers cannot afford to build undelivered “white tails,” or aircraft with no buyers lined up in advance, because of the cost of keeping such inventory on their books.

Each A380 is worth $432.6 million at list prices, but after discounts it would sell for significantly less.

Dubai’s Emirates, which strongly backs the A380, recently stepped in to buy two A380s stranded by a Japanese airline bankruptcy, but the output cut suggests that although by far the largest customer, it won’t always be a buyer of last resort.

Rival Boeing (BA) has been cutting production of its 747 jumbo as interest all but evaporated in the passenger version and weak cargo markets dampened interest in a freighter version.

The U.S. planemaker however said on Tuesday it had finalised terms for Russia’s Volga-Dnepr to take 20 747-8 freighters, including four that had already been built and lacked buyers.

Industry sources say Airbus is considering ways of improving the A380’s performance as it weathers a dry period in sales, while putting aside costlier plans for an engine upgrade.

With doubts intensifying about the global economy, the planemaker believes airlines may lack the confidence to consider the A380, even though the case in favour has been helped by lower oil prices.

Pressure from large twin-engined jets is rising, meanwhile, as Airbus itself considers expanding its A350 jet family to take 400 people, and Boeing ponders stretching its already heavily upgraded 406-seat 777-9 to take another 40-50 passengers.