Here’s What The Critics Are Saying About the New ‘Ghostbusters’ 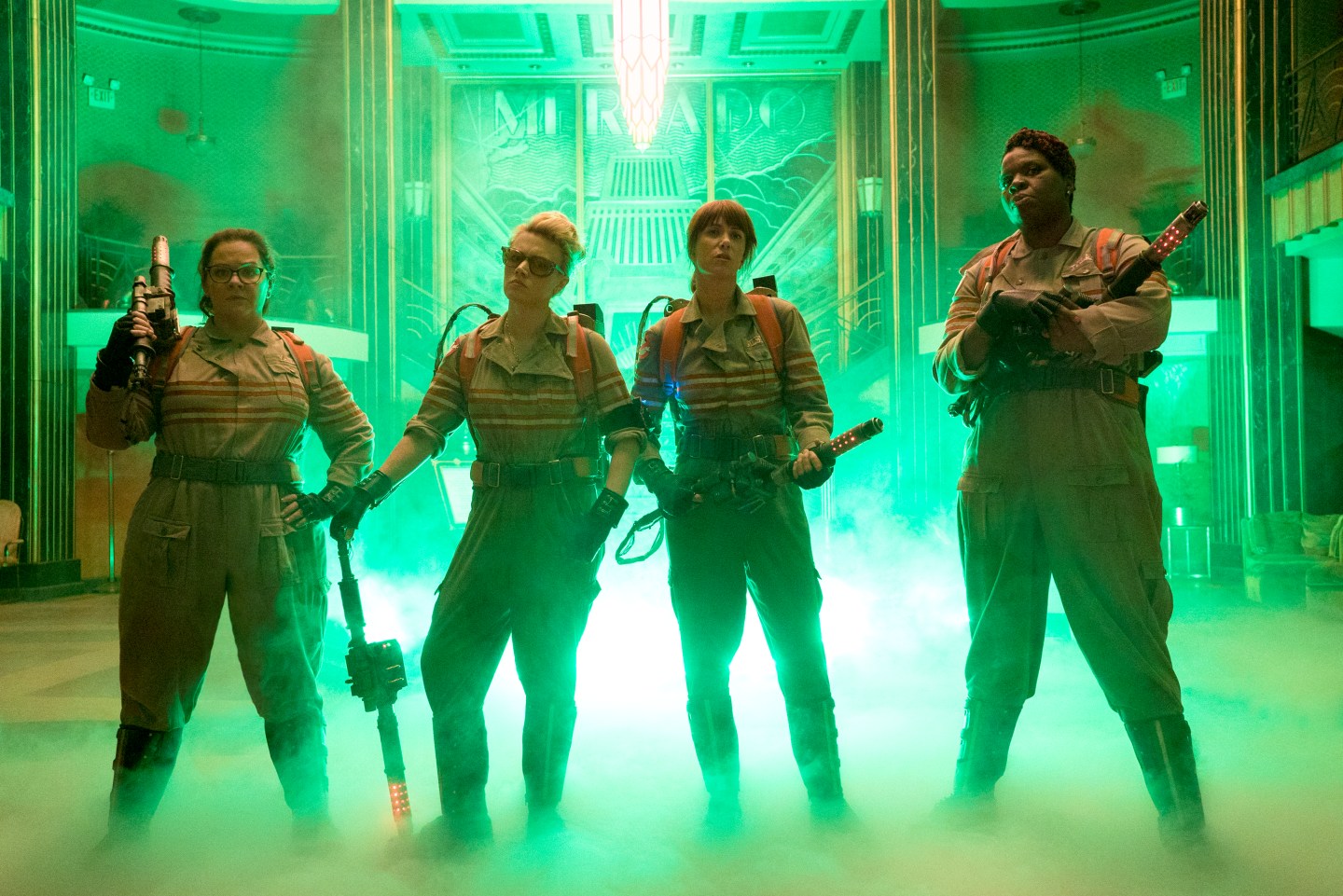 After months of reading about the online vitriol circling Sony’s Ghostbusters reboot, movie critics are finally weighing in with their official takes on the controversial (for some), female-led sci-fi comedy that opens in U.S. theaters July 15. And, the verdict is mixed.

While the bulk of early reviews are positive, some top critics have also called the film a “horrifying mess” with “zero thrills.” The latter are sure to please the Internet commenters who hate the idea of remaking the original 1985 Ghostbusters with all-female leads. Fans opposed to the reboot—many of whom had ever seen the new movie—even gathered on Reddit to spread their displeasure with the movie’s gender-reversed leads and filter out any positive reviews of the film.When Sony released its first trailer for the Ghostbusters reboot, the underwhelming teaser inspired a number of misogynistic comments online on its way to becoming the most-disliked movie trailers ever on YouTube.

Considering all of that negativity, Ghostbusters has so far fared reasonably well with professional critics.

As of Tuesday, the movie had a rating of 59 out of 100 on Metacritic—which is not far off from the original’s rating of 67—as well as a 78% “fresh rating” on review aggregator Rotten Tomatoes.

The latter represents a fairly solid Rotten Tomatoes score for an action-comedy summer release, as evidenced by the 68% rating critics recently handed Warner Bros’ Central Intelligence, starring Kevin Hart and Dwayne “The Rock” Johnson, which has earned more than $108 million domestically since its release last month. The new Ghostbusters also has a better Rotten Tomatoes score than last weekend’s box-office champ, Universal’s animated feature The Secret Life of Pets. And, when compared to another high-profile franchise reboot—last summer’s Jurassic World, one of 2015’s highest-grossing movies—Ghostbusters also wins the critical battle.

Looking over some of the reviews from top critics at major publications, though, it is clear that the critical community seems to be relatively split on the Ghostbusters reboot, despite the star-power of popular comedic actresses Melissa McCarthy and Kristen Wiig, as well as current Saturday Night Live cast-members Kate McKinnon and Leslie Jones. (The film’s main male lead is Chris Hemsworth, Marvel’s Thor, while several of the previous films’ stars also make cameos.)

Here is a selection of some of the movie’s reviews:

Manohla Dargis, The New York Times: “No one performance dominates the new Ghostbusters, which is for the most part democratically comic (a Paul Feig signature), although Kate McKinnon’s magnificent, eccentric turn comes close . . . Here, she embodies the new Ghostbusters at its best: Girls rule, women are funny, get over it.”

David Edelstein, New York: “What’s that spooky sound you hear throughout the much-anticipated, female-led remake of Ghostbusters — a sound that freezes the blood of comedians, that haunts the dreams of clowns? It’s the sound of silence, of dead air, of jokes dematerializing into the void. The new Ghostbusters isn’t a horror, exactly. It’s just misbegotten. It never lives.”

David Rooney, The Hollywood Reporter: “The unfunny mess that hits theaters Friday, like a big goopy splat of ectoplasm, will no doubt make [the films’] naysayers feel vindicated. But the fact is that an estrogen-infused makeover, particularly one with such a comedically gifted cast, was a promising idea. Sadly, that’s where the inventiveness ended.”

Jesse Hassenger, The AV Club: “As enjoyable as this movie is, sometimes it feels like it’s holding back; no one’s id runs wild. But the limitations of Ghostbusters make Wiig, McCarthy, McKinnon, and Jones even more valuable. They make a big franchise-starter warmer and more endearing than it needs to be.”

Nigel Smith, The Guardian: “Rejoice! The new Ghostbusters is good. Very good, in fact . . . Most crucially, the mean-spirited reception to the film before anyone had seen it does not seem to have put a dampener on the movie itself. Fun oozes from almost every frame; likewise the energy of a team excited to be revolutionizing the blockbuster landscape. Let’s just hope everyone will enjoy the view.”

Chris Nashawaty, Entertainment Weekly: “After a year and a half of noxious hot air, [director Paul] Feig’s comedy is finally here and it’s time to ask the only question that should’ve been posed in the first place: Is the new Ghostbusters funny? The answer is: Kind of, but not nearly to the degree it should be considering the talent involved.”

Between that mixed critical reception, the franchise’s cult following, and some of the vitriolic responses to the reboot’s initial trailers, it will definitely be interesting to see how the new Ghostbusters fares at the box office this weekend.

Estimates for the film’s domestic opening predict anywhere from $45 million to more than $60 million—a range that would hand Ghostbusters the biggest opening weekend for a PG-13 rated comedy so far this year. But, the movie cost a reported $150 million to make—an astronomical amount for a comedy, even one as hyped as this—which means that Sony likely can’t afford much of an opening weekend stumble from the film following months of chatter (good and bad).