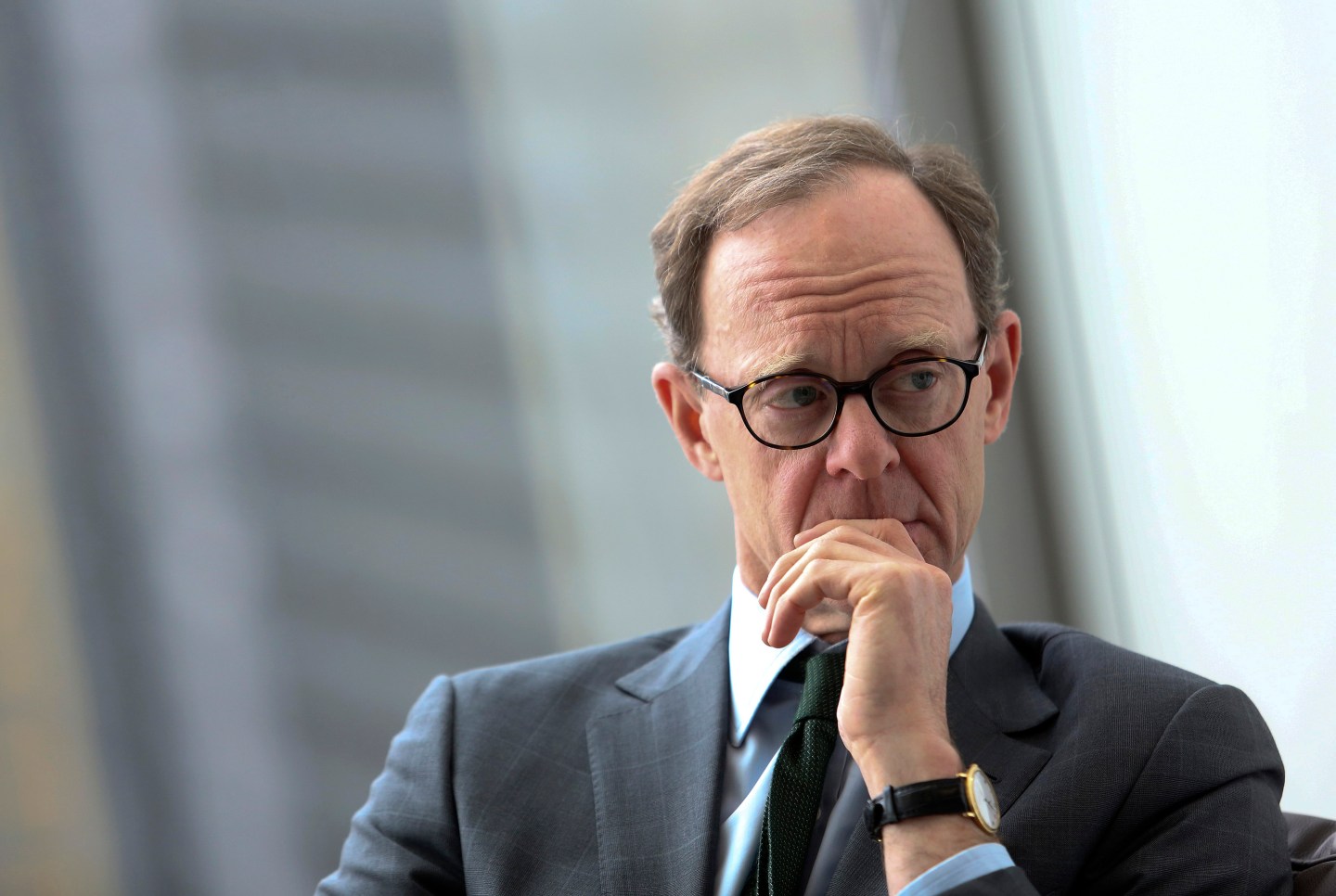 The Brexit fallout has already crossed the pond, sending U.S. bank stocks reeling (they have since recovered) and reducing the chance that the Fed will raise interest rates anytime soon.

What’s more, the surprise vote may further damage the already-bruised reputation of a prominent Wall Street dealmaker, who, in the years following the financial crisis, bet heavily on small British banks—the ones hardest hit by Brexit.

J. Christopher Flowers, who was involved in the deals struck to fix the financial crisis—he’s played by actor Michael O’Keefe in the movie of Too Big to Fail—and has invested in troubled banks around the globe through his eponymous private equity firm, appears to be facing big losses. The problem: A large portion of one of his private equity funds is invested in troubled U.K. bank OneSavings, shares of which have plummeted since the Brexit vote.

Flowers had been working on a deal to bail investors out of J.C. Flowers Fund III, which is the one heavily invested in OneSavings, and another fund, both of which have struggled in recent years. And it appeared he had one. But the Brexit vote and Flowers’ fund’s subsequent losses scotched that plan. Fortune has learned a July 1 deadline for a tender offer from Goldman Sachs Asset Management and Coller Capital, a British private equity firm, to buy out the stakes of Flowers’ outside investors in J.C. Flowers Fund III has come and gone with no deal in sight.

It’s the latest in a string of set backs for Flowers, who made a fortune in the early 2000s buying up Japanese banks. Flowers was, in his 30s, also one of the youngest members of Goldman Sachs operating committee. He left the investment bank after 19 years in 1998, shortly before Goldman’s IPO, and set up his private equity firm.

However, the turmoil in the financial industry since 2008 has made it more difficult for billionaire Flowers, 58, to make his turnaround magic work. Last year, his firm J.C. Flowers returned more than $3 billion to China’s sovereign wealth fund after failing to find enough distressed financial institutions worthy of investment.

Now, thanks to Brexit, British banks—a focus of Flowers’ newest fund—have become his latest headache, as they’ve lost half their value when the vote came in. After raising $2.3 billion for Fund III in 2009, Flowers invested in two so-called “challenger” British banks that emerged after the financial crisis as competitors to the major financial institutions, which were hobbled by bad loans. The financier and accomplished chess player spent years in London scoping out the landscape after the crash and discovered that these players filled a void. But as a July 1 report by the Bank of England noted in its assessment of the post-Brexit world, the challengers have “ relatively high” exposure to riskier lending, making them more vulnerable to an economic downturn than their larger established rivals.

“It is too soon to tell what the longer-term effect [of] the Brexit vote will be on these investments, but if the Brexit means lower real estate prices in Britain, that is probably negative for OSB [OneSavings Bank] and Castle Trust,” Flowers told investors in the letter following the vote, which Fortune has obtained. Castle Public Trust is not a publicly traded company. But after the Brexit vote, shares of OneSavings Bank have lost about half their value and are now slightly above the 2014 IPO price of 170 pence ($2.20). (During Friday’s market uptick, they bounced back and are now down only 30% since the vote.)

The new bank was created jointly by the Kent Reliance Building Society, which had taken off during the housing bubble, and an investment by Flowers to bolster its dwindling capital following the crash, culminating in an IPO.

Despite his Brexit woes, Flowers was successful in restructuring another fund. Last summer, Flowers began the effort to let investors out of his largest fund J.C. Flowers Fund II, a $7 billion investment vehicle focused on banks that was launched in 2006, making it particularly vulnerable to the ensuing financial crisis. One of its biggest investments, Japan’s Shinsei Bank, the renamed Long Term Credit Bank of Japan, has fallen more than 60% since the fund bought it in 2008. The fund also had a 6% stake in MF Global Holdings, the derivatives broker started by Flowers’ former colleague at Goldman Jon Corzine, that sought bankruptcy protection in 2011. Flowers also served on MF Global’s board.

Goldman and Coller, which invests in private equity in the secondary market, agreed to buy out Flowers’ investors at what the Wall Street Journal reported was a 27.5% discount to the fund’s already depressed value as of March 31. (It had already lost 60% of its value by then, the WSJ reported.)

The deal for Fund II went through on July 1, according to a letter Flowers sent to investors this week, which Fortune has seen.

But the tender offer for Fund III did not go through because one of the purchase conditions wasn’t satisfied. A clause in the agreement voided the tender if the share price of OneSavings Bank fell by more than 20% between June 3 (the date the tender was submitted) and July 1, its deadline. “Due to a decline in the share price of OneSavings Bank by an amount in excess of 20% on the date of the invitation [June 3] as compared to the price on the date of the offer submission deadline [July 1], no tenders were accepted,” Flowers wrote his investors this week. During that time period, the shares fell by about 45%, most of it after the Brexit vote, which was on June 23.