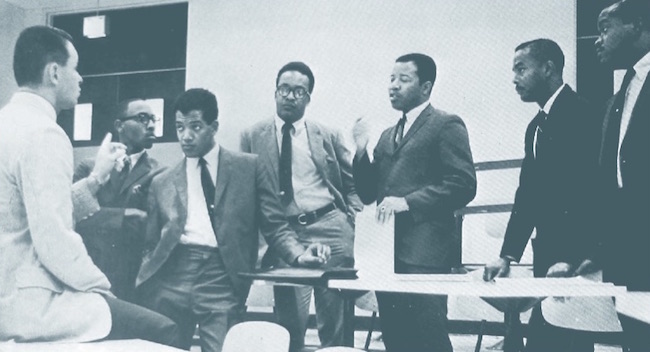 Vernon Mason remembers the utter devastation he and other students felt when they learned of the assassination of Martin Luther King Jr. on April 4, 1968. Living in married student housing on the Bloomington campus of Indiana, absorbed in his second year as an MBA student and with a wife who was eight months pregnant, he recalls the crushing news as if it happened yesterday.

“For me it was very, very personal,” confides Mason, who in 1967 was a member of the inaugural class of the Consortium for Graduate Study in Management, an academic and business network to help African-American men acquire the skills they needed to find jobs in corporate America. “All of us were young, in our early 20s, and I was of the impression that after all of the other stuff that Dr. King had experienced — including bombings of his home and all of that — that we were beyond that, that nothing would happen to him. He had won a Nobel Prize, and for us, he was our hero, our personal hero.”

One word keeps popping up as Mason thinks back to the days, 50 years ago, when he and 20 other young African-American men became the first members of the Consortium: turbulent. King had marched on Washington in August 1963. President Kennedy was assassinated later that year. Amid the passage of the Civil Rights and Voting Rights acts, violence against African-American communities was rampant, and social division and rancor sometimes reached fever pitch, all amid the escalation of the war in Vietnam.

In many ways the turbulence of the decade culminated in the tragic events of 1968. Robert Kennedy was assassinated just over two months after King was gunned down. Mason remembers taking comfort in Kennedy’s words about King; he remembers, too, that just when things seemed most unbearable, he was consoled and supported by his cohort, professors, and the university administration. “In terms of the school and the people and all of the people we were studying under, everyone — to the person — was just very, very supportive during that whole period. That at least made it bearable.”

Mason credits the Consortium for being one of the great positive developments to emerge from that difficult time. “As a student of American and African-American history, it was just incredible to me that during this extremely difficult time in American history, we see a graduate professor in business at Washington University who had the insight and foresight to figure out how to impact the nation in a positive way, by diversifying corporate management around the nation.”

The Consortium is the brain child of Sterling Schoen, an organizational behavior professor at Washington University in St. Louis whose research in 1963 found that not a single African American was employed in management in the Fortune 500. Three years after his study, the Consortium would open its doors with a $300,000 grant from the Ford Foundation in 1966. While the organization would not be a tonic for the turmoil of the times, it would be in the vanguard of long-term change. And 50 years later, as it is celebrated, the Consortium’s mission remains as relevant as ever.

The class that starts this fall at the Consortium’s 18 schools — expanded from the original three, the University of Wisconsin-Madison, Washington University in St. Louis, and Indiana University-Bloomington — will be a record 490 students strong, up from those original 21, says Consortium Executive Director and CEO Peter Aranda. Thirteen members of that first class graduated with their MBA; this year the number was 411.

In the past 50 years, the organization — which opened its doors in 1970 to women, Latinos, and Native Americans — has offered more than $325 million in fellowships to MBA students across the country, covering full tuition and fees for up to two years of full-time study. Last year, some 1,075 candidates applied to the program, with 628 admitted to at least one member school and 369 extended fellowship offers. The list of Consortium members now includes the business schools at Yale, Dartmouth, Cornell, UC-Berkeley, and Georgetown.

A single application with The Consortium allows a candidate to apply to up to six member schools. Consortium fellows are invited to an annual Orientation Program & Career Forum where they meet with the group’s corporate partners and connect with incoming students from the 18 schools participating in The Consortium.

Aranda, himself a Consortium grad (Class of 1987), is astounded when he thinks of the social convulsions out of which the organization was born, and the bravery of its founder to launch such a program at a time when some colleges and universities — including Washington University — were still segregated.

“It’s amazing to me, sitting in the chair that I sit in, that we’re still here but not only that we’re still here surviving, but we’re thriving,” Aranda says. “The social landscape around the country, there was a lot of upheaval, there was a lot of protesting, there was a lot of civil rights activity going on, and much of it positive, but some of it not positive, some of it violent, and so it’s amazing to me the strength, the courage, the compassion that had to have existed at these schools and in the leadership ranks within these schools to actually make that commitment during that time.

“Washington University was an exclusive campus prior to that,” Aranda adds. “There were no black people. And so it was an incredible beginning, and even though we do great things today and we’re proud of our 490 students at 18 schools, I think what Sterling Schoen had to contend with in 1966 and 1967 was much, much harder.”

Vernon Mason, who went straight to Indiana for an MBA after earning his undergraduate degree from Morehouse College, agrees. “I thought for Dr. Schoen to start this initiative was one of the most insightful and foresightful things that could be possibly done. And a lot of us felt that way,” says Mason, who graduated from Indiana in 1969 before earning a law degree from Columbia in 1972. He practiced law until 1995, when he became a minister. He will celebrate his 70th birthday in October.

Members of the original Consortium cohort went on to varied careers. Several had successful runs at companies like PepsiCo, IBM, and other large corporations.

Fred Harris, who received his MBA from the University of Wisconsin-Madison in 1971, was a Consortium member when its class sizes were in the double digits. So he was taken aback this spring when he was invited by his former employer, 3M, to attend a 50th anniversary celebration of the Consortium in St. Louis, only to discover how many students will be part of the incoming 2016-2017 class.

“Each year the Consortium has their orientation program, and there were almost 500 students there this year,” Harris says. “That just blew me away. It’s real gratifying to see that the program has sustained itself so long.”

Harris had experience going from small programs to large ones. He attended the University of Arkansas-Pine Bluffs, a historically black university, for his undergraduate degree before matriculating at Wisconsin.

“It was an interesting experience because I’m from Arkansas and I came from this smaller school, and suddenly I arrive on the campus of this Big Ten school,” Harris says. But while he remembers it as “a terrific experience,” Harris also recalls struggling to adapt — and his professors and Consortium colleagues coming to his rescue.

“I wasn’t prepared to study in a graduate program when I came, so it was an adjustment for me, the school, the climate, the atmosphere, and the study habits,” he says. “But they provided some great support, the Consortium did, through the professors — I remember them to this day, they provided great support in helping me and others to adjust and to become successful in life.”

Harris recalls only one occasion when race played a negative role in his experience at Wisconsin. A marketing professor had a reputation for being extra tough on black students, and Harris was warned not to take his class. “But I’m the type of person that doesn’t quit, so once I signed on for something, I was determined to finish it. This particular professor didn’t think that programs like the Consortium were well-founded, and no one had ever come out of there with a decent grade.

“I didn’t take the warning. I did not drop the course, I finished it and it’s the only C I got in grad school, and I think there are some correlations there. That’s the only such incident that I can think of on that campus.”

On the contrary, he says, his experience through the Consortium — and later during his career with 3M — was free of the kind of prejudice that might be expected of the era.

“I get asked this question a lot,” Harris says. “I’m sure there probably was [racism] but I just blew right by it. My attitude is that I am a little boy from the cotton fields of Arkansas, given all of this opportunity, and man, I am going to take it. Nothing is going to stop me unless there is a wall, and the wall better be more than six feet high.”

Harris, who is now retired, shakes his head at the longevity of the Consortium for Graduate Study in Management. “For a program to sustain itself for that long of a period of time, it had to adapt to changing times and changing complexities in our world, and adjust to what sponsors wanted and what was needed in the marketplace in the program.

Peter Aranda says for many, the appeal of the program lies in its network of more than 8,500 graduates. “Realistically, the value of the Consortium affiliation is the potential to connect and interact with people who share similar experiences from 18 schools around the country,” he says. “That is very, very powerful.

“Everyone is attending a great school — every one of our 18 schools has a fantastic alumni network. However, having a second network that is really focused on diversity and inclusion and includes a large class size, more than 8,500 people who have gone through the program before you, is an excellent opportunity to learn about careers in different industries, careers in specific companies, to ask some of the hard questions that you may not ask a majority recruiter but are interested in knowing: ‘What’s it like for a person of color to work at X,Y,Z company?’ etc., etc. So the power of that network is incredible.”

More from Poets&Quants: MBA Envy? Not When You Know The Crazy Hours MBAs Work

The most recent school to join was Georgetown in 2013, and Aranda says other prospective member schools are regularly considered. “I receive calls at least once a month from schools that are interested in learning more about the Consortium and how they might become a member,” he says. Candidates are considered based on a variety of factors, not least whether they can further the Consortium’s mission to increase the ranks of under-represented minorities at member schools.

That mission will continue as long as minority representation at Consortium member schools’ MBA programs continues to lag behind the general population, Aranda says. “When you think of what the population of under-represented minority students looks like in MBA programs, here are some basic stats: Top 50 MBA programs around the United States, if we assume the average enrollment in the full-time program is about 200 students per class, we’re looking at a total population of 10,000 students and roughly 800 of them, or 8%, are under-represented minorities — and so more than half of those are affiliated with the Consortium.

“And so having the ability to add that population to our personal network is very powerful. But we still have a long way to go. When we can say that member schools have under-represented minorities close to 30%, matching the population demographics, then we’ll believe and feel that our mission has been accomplished. Our schools today are running around 12% on average — better than the national average in the top 50, but still a long ways away from 30%.”

This article originally appeared on Poets&Quants.