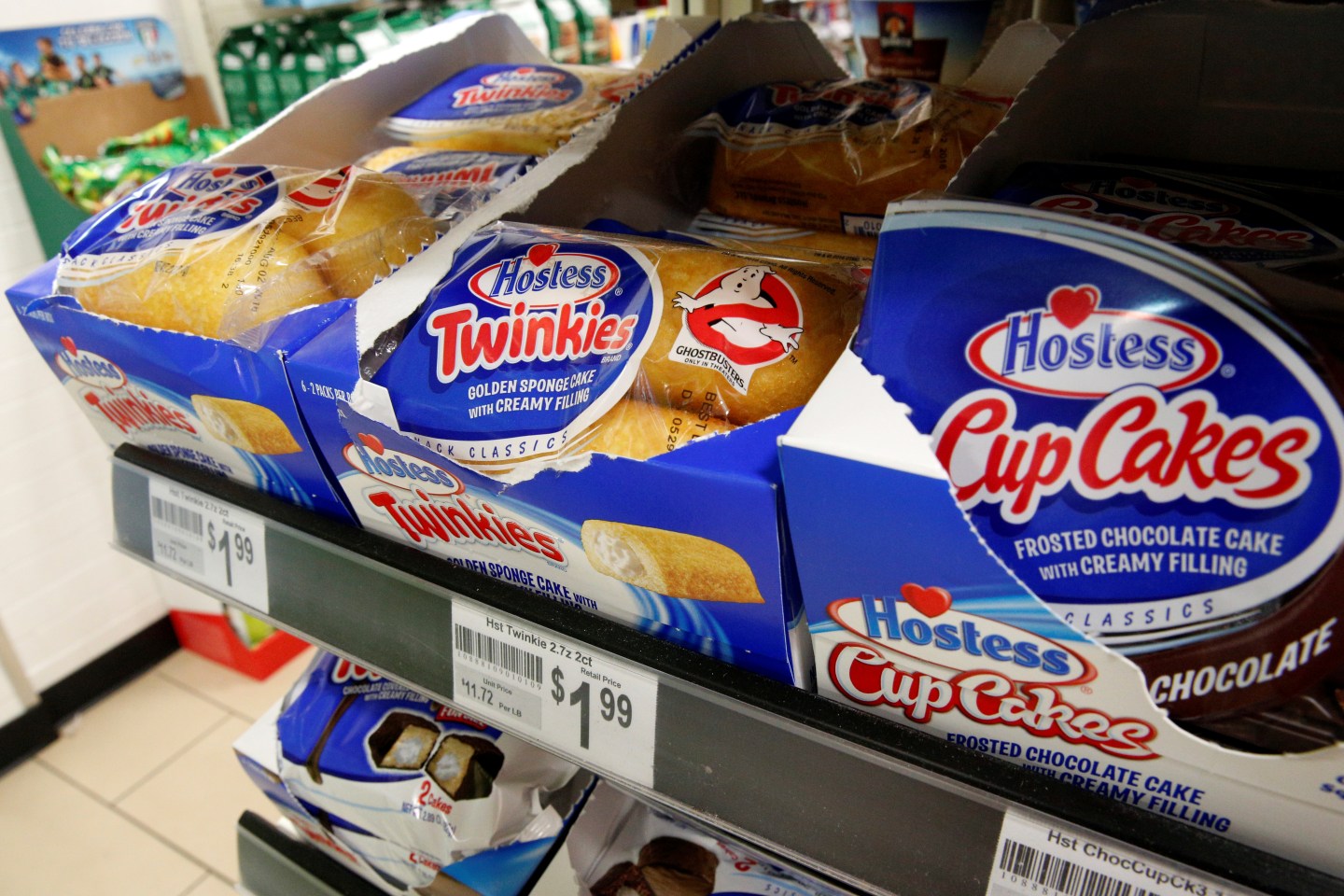 The owner of the Twinkies, Ding Dongs, Ho Hos, and Wonder bread is aiming to appease investors’ sweet tooth this week by entering the public markets under an unusual format. It sold a majority stake to private-equity firm Gores Group, a blank-check company that raised $375 million last year with the stated purpose to eventually acquire another company or key brand. The plan is that after the deal is complete, the resulting company will be known as Hostess and will trade under that name this fall.

Though the return of Hostess to public markets is essentially billed as an IPO, investors could just buy shares of Gores Holdings right now if they’d like. Some have already opted to do so, as shares trading under the ticker symbol GRSHU are up nearly 5% on Wednesday.

It is a completely different sell than how other food makers have tried to win over Wall Street. When Annie’s Inc. filed to go public in late 2011, it proclaimed to be a rapid-growing natural and organic food maker that was on-trend by selling premium products made with “high-quality ingredients at affordable prices.” Less than four years later, Amplify Snack Brands aimed to sell a similar story: our SkinnyPop popcorn is “better for you.”

While Hostess says that consumers are snacking more, it also finds itself in a tough spot when it comes to trends that Big Food makers are confronting in the U.S. and other Western markets. Hundreds of food startups are aiming to disrupt the center aisles of the grocery store, pressuring the biggest food makers, which are pivoting by selling healthier fare or investing in small, VC-backed rivals to get some of the action. Hostess hasn’t made any notable inroads trying to address that healthier trend.

“Hostess is a billion dollar brand in terms of what consumers spend at retail,” Chief Executive William Toler said during a presentation. He touted opportunities to get greater market share through a direct-to-warehouse distribution model, by launching new products in more bakery categories, the upcoming debut of frozen Twinkies, and opportunities to market goods abroad.

But buyers should beware for a few reasons. Unlike a traditional IPO Securities and Exchange Commission filing, known as a S-1, Hostess and Gores aren’t required to share all the financial tidbits that typically come with going public. That means investors have to wait until this fall to learn more about sales trends, profitability, operating expenses, and potential risks to the business.

And eying recent offerings from prepackaged food makers, IPOs in the space are mixed at best. Organic brand Annie’s (BNNY) performed well on the first day of trading, as did Pinnacle Foods (PF). But the first-day performances for Dole Foods, WhiteWave Foods (WWAV) and Amplify Brands (BETR) were all muted. Part of the problem? Investors aren’t as familiar with some of those brands, in particular WhiteWave and Amplify. That’s one advantage Hostess has as it aims to sell its story to potential investors.

“There could be some interest in such an iconic brand,” said Matt Kennedy, an analyst at IPO ETF manager Renaissance Capital. “Investors and consumers like to deal with what they know. And Americans still love fattie foods.” Renaissance Capital isn’t tracking the Hostess IPO as a traditional market debut.

It does have one key ace up its sleeve. Hostess is steered by billionaire C. Dean Metropoulos, who will remain as executive chairman of the nearly 100-year-old company. Over the past several decades, the investor has helped revive a number of beleaguered brands, including Bumble Bee, Pabst, and Chef Boyardee.

His plan for Hostess? Propel the brand through food innovations and “strategic acquisitions,” like a recent deal for Superior Baking, which helped extend Hostess’ reach into the store bakery market.

Along with Apollo Global Management, Metropoulos has made some key strides in getting Hostess better positioned to run more smoothly as a public company. Those changes include $130 million in baking facility upgrades, drastically cutting the company’s workforce, selling fewer brands, and cutting bakery costs. And while annual sales are down from about $1 billion previously to $621 million today, Hostess is now reporting profitable margins. It also unloaded the labor issues that the company had claimed landed it into bankruptcy in the first place.

Another key advantage? Hostess is a bit of a bargain. The company expects the enterprise value will be about $2.3 billion, or 10.4 times estimated 2016 adjusted earnings of approximately $220 million. Average enterprise value on that basis for a basket of publicly traded food companies—including WhiteWave, Amplify, Mondelez, and Kellogg—stands at 13.5x this year’s adjusted earnings.

Hostess is likely a bargain because of the numerous public woes the company has faced in recent years. The company’s management clearly hopes the tasty treats it sells on grocery shelves are too sweet to pass up.