Redstone on the Stand in 2014: Selective Forgetfulness? 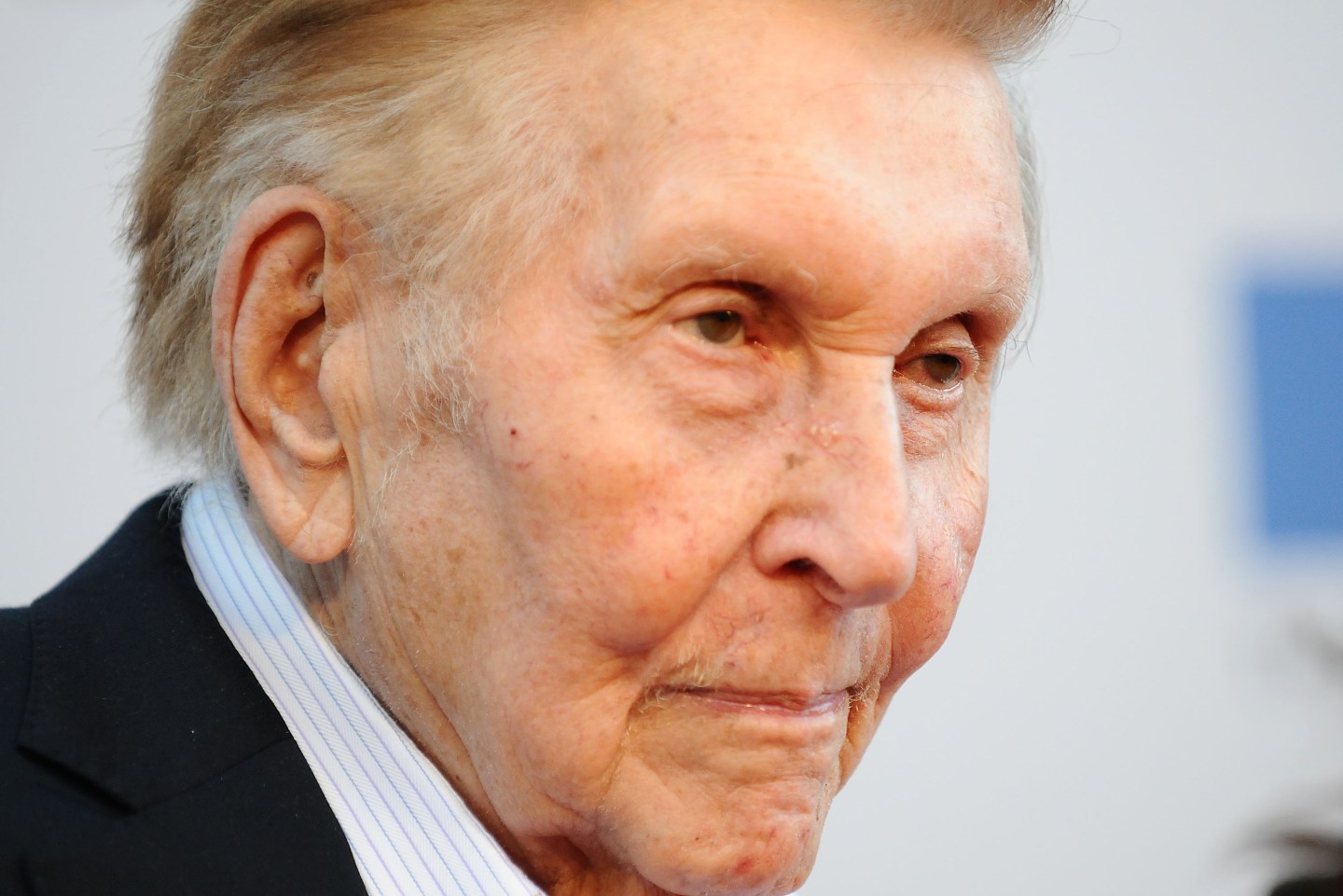 For more than seven months, Sumner Redstone, now 93 and barely able to speak, has asserted (through lawyers and PR teams) that he remains mentally competent—sharp enough to change his health care agent, to erase a $70 million bequest to an ex-girlfriend from his will, and, most important, to remain in control of Viacom (VIAB) and CBS (CBS), the jewels in his $42-billion media empire.

The legal war over that last claim, now being waged in three states, will determine the fate of embattled Viacom CEO Philippe Dauman, Redstone’s longtime protégé, who the ailing mogul now wants to oust.

Yet more than two years ago, Redstone, then a mere 90 and still easily understood, sought advantage in another legal battle by selectively portraying himself as a doddering old man with a terrible memory. (Redstone’s tax attorney, Lawrence Hill of Shearman & Sterling, declined to comment on the record.)

In sharp contrast to the high-stakes, breathlessly followed proceedings of recent months, this appearance—on March 6, 2014—occurred in a nearly empty courtroom in downtown Los Angeles, with not a single reporter present. On this occasion, Redstone himself took the witness stand.

His adversary: the Internal Revenue Service.

Given Redstone’s power and wealth—then estimated at more than $6 billion—the dispute seemed almost beneath his notice. At issue: the IRS’s claim that Redstone owed $737,625 in unpaid gift taxes, dating back to his 1972 transfer of stock in National Amusements, his family’s private holding company, into trusts for his two children. The IRS hadn’t assessed Redstone (who actually began his career as a tax lawyer) until 2013. Counting proposed penalties and decades of interest, Redstone stood to owe about $15 million. That might seem like a tolerable expense for a billionaire, especially one who would make gifts to two female companions of $45 million apiece during 2014.

But though Redstone was breathtakingly generous with much-younger women, he was also famously litigious. Rather than settle with the IRS, he sued.

In legal filings, the four attorneys representing Redstone (including CBS board member David Andelman) called the claim over the 1972 transaction an “unprecedented abuse,” noting that Redstone was “now 90 years old; material witnesses have been dead for decades; documents have long since been discarded or have disintegrated; memories have unquestionably eroded.”

IRS rules, however, provide no statute of limitations in cases where a taxpayer failed to file a required gift-tax return. The presiding tax-court judge allowed the dispute to proceed to trial. Redstone’s battle with the IRS would drag on for more than two and a half years, culminating in days of sworn testimony in Boston and Los Angeles.

The central issue was whether Redstone’s stock transfer was actually a gift to his two children (which would require the tax payment) or, instead, an ordinary business transaction made for “full and adequate consideration” (which wouldn’t).

When Redstone testified in March 2014, Sydney Holland, then 42 and his live-in girlfriend, escorted him into the nearly empty courtroom, witnesses tell Fortune. Though frail, the billionaire initially appeared eager to engage, answering the first question from his lawyer even before being sworn in, with speech that was readily understood.

“He was combative,” recalls attorney Howard Castleman, who attended the hearing on behalf of the estate of Redstone’s late brother, then facing a similar IRS tax case. “He showed the same grit and determination he was famous for.”

Redstone responded to his lawyer’s leading queries crisply, according to witnesses and a transcript of the hearing. The billionaire answered 29 questions without difficulty or hesitation. He first went through his personal biography, including his work in military intelligence during World War II (“I helped break the Japanese codes”).

Then Redstone’s lawyer asked him nine questions confirming the facts of an affidavit Redstone had given that detailed the origins of the trust in the early 1970s (“an equal number of shares would be placed in trust for my two children…”). Once again, Redstone demonstrated his memory, in this instance of the provisions of the trust and the reasons for entering into it.

Campobasso asked him to confirm that before the transfer at issue took place, he held 100 shares in National Amusements stock.

Did he recall creating trusts for his children, Brent and Shari?

“No, I don’t remember. You’re talking about 42 years ago,” Redstone responded. “How would I remember that?”

On and on it went. “I have no recollection….you’re talking about 42 years ago.”

“You don’t remember writing the letter?”

After 44 such responses (including two instances in which Redstone blurted out “I don’t remember” before the IRS lawyer had even finished asking her question), the judge finally interrupted and suggested to the government attorney that her queries were futile: “I don’t think you—he’s not going to be able to give you anything.” Campobasso sat down.

But the IRS lawyer wasn’t completely stymied. Campobasso had managed to extract a critical admission from the billionaire. Armed with transcripts of Redstone’s testimony in a 2009 trial—five years earlier—she asked him if he remembered that dispute, O’Connor v. Redstone.

“Have no recollection of that,” he testified. “I don’t even remember who O’Connor was.”

“If you had testified in a proceeding in court, would you have told the truth?” she asked.

“Of course I tell the truth.”

She then introduced Redstone’s sworn testimony in 2009, where he called the 1972 stock transfer “an outright gift.”

Did he remember making such a statement? Did he tell the truth in that court proceeding?

Now Redstone tried to have it both ways. “I tell the truth all the time,” he testified, “but I don’t remember what you’re talking about.”

In the end, Redstone’s efforts failed to carry the day. In a 47-page opinion issued in December 2015, U.S. tax judge Albert Lauber ruled that Redstone was liable for the $737,625 in gift taxes, plus interest. He did, however, rule that Redstone didn’t need to pay $590,100 in fraud and other penalties the agency had sought.

Like the ongoing Redstone litigation, the case had its roots in the mogul’s troubled family relationships, which have played out over decades. But in the end, in an ironic twist, he was forced to pay the tax because the judge concluded the stock transfer was “essentially motivated by the kinship that he had with his father and his children”—a gift, not a business transaction.

In the decades after the stock transfer, National Amusements served as Redstone’s holding company for his bold acquisitions of Viacom, Paramount Pictures and CBS, in which he retains 80% controlling interest.

Just months after his 2014 testimony, a string of hospitalizations and a bout with pneumonia would leave Redstone physically incapacitated and dependent on a feeding tube, unable to speak a sentence that could be understood without the aid of a translator.

Yet he remains the controlling shareholder of his two public companies, and in May, began taking the unexpected steps toward unseating Dauman that are now the subject of a raging court battle over his mental capacity.