America’s Government Is a Lot Whiter Than America Itself 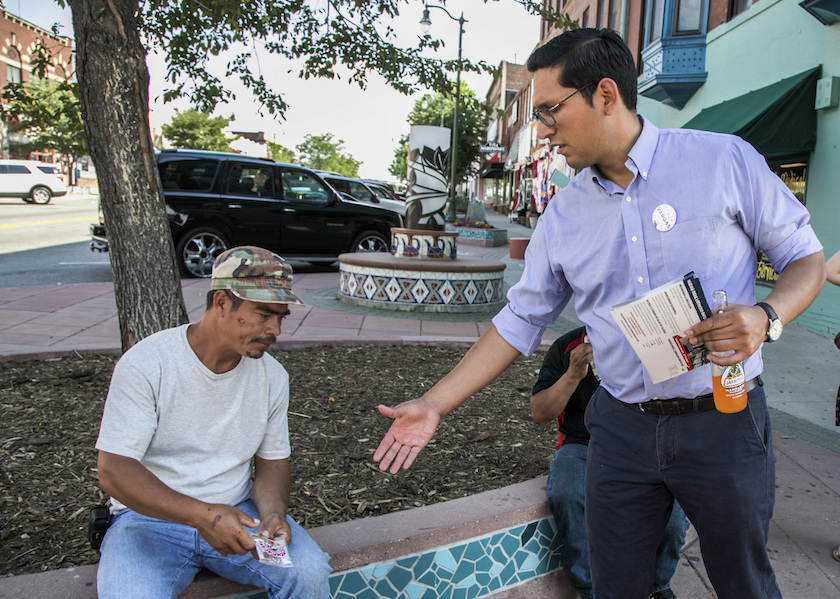 As Virginia’s only Latino state lawmaker, Alfonso Lopez made it his first order of business to push for a law granting in-state college tuition to immigrants living in the U.S. illegally since childhood.

The bill died in committee.

So Lopez tried again the next year. And the year after that.

Now, in his fifth year in office, Lopez is gearing up for one more attempt in 2017.

“If we had a more diverse [legislature] and more Latinos in the House of Delegates,” he says, “I don’t think it would be as difficult.”

America’s government is a lot whiter than America itself, and not just in Virginia.

While minorities have made some political gains in recent decades, they remain significantly underrepresented in Congress and nearly every state legislature though they comprise a growing share of the U.S. population, according to an analysis of demographic data by The Associated Press. The disparity in elected representation is especially large for Hispanics, even though they are now the nation’s largest ethnic minority.

A lack of political representation can carry real-life consequences, and not only on hot-button immigration issues. State spending for public schools, housing and social programs all can have big implications for minority communities. So can decisions on issues such as criminal justice reform, election laws or the printing of public documents in other languages besides English.

When the people elected don’t look, think, talk or act like the people they represent, it can deepen divisions that naturally exist in the U.S.

Campaigning door-to-door in the heavily Latino neighborhoods of south Omaha, Nebraska, first-time legislative candidate Tony Vargas has talked with numerous people afraid to participate in democracy. Some felt shunned or confused when they once attempted to vote. Others have misconceptions about the legal requirements to do so. Some simply believe their vote doesn’t matter.

“You can hear the fear in people’s voices, and you can hear that they feel like less of a member of society, less of an American,” says Vargas, whose parents came to the U.S. from Peru.

Though Hispanics now make up 10% of Nebraska’s population, there is not a single Latino lawmaker in its Legislature.

The Associated Press analyzed data from the U.S. Census Bureau, Congress and the National Conference of State Legislatures to determine the extent to which the nation’s thousands of lawmakers match the demographics of its hundreds of millions of residents. The result: Non-Hispanic whites make up a little over 60% of the U.S. population, but still hold more than 80% of all congressional and state legislative seats.

—Blacks are the least underrepresented but still face sizable gaps in some places. In Mississippi and Louisiana, about one-third of the population is black. Yet each state has a single black member of Congress and a disproportionately small number in their state legislatures.

—More than half the states still have no lawmakers with Asian or Pacific Islander heritage, and just four states have any in Congress.

—Hispanics comprise more than 17% of the U.S. population, yet they are fewer than 7% in Congress and fewer than 4% of state legislators. The gaps in representation exist even in California, New Mexico and Texas, with the largest Latino populations.

There are many reasons for the disparities.

The U.S. Hispanic population generally is younger and less likely to be eligible voters. And those who can vote often don’t. Voter turnout among Hispanics (as well as Asian Americans) dipped to just 27% in 2014, compared with 41% for blacks and 46% for whites, according to the Pew Research Center. Low voter involvement can make it harder to recruit minority candidates, and less likely for minority communities to be targeted by campaigns.

The power of incumbency also can work against minority representation. Decades of deeply ingrained name recognition have helped white lawmakers continue to get elected in some districts where population shifts have gradually made racial minorities the majority.

Another factor is the way legislative districts have been drawn. Racial gerrymandering can occur either when minority communities are divided among multiple districts to dilute their voting strength or when they are packed heavily into a single district to diminish the likelihood of minorities winning multiple seats.

In states that have elected a critical mass of minority legislators, they’ve claimed some policy successes.

In California, a new law expands the state’s Medi-Cal health care program for low-income residents to immigrant children, regardless of their legal status. The state budget includes $15 million for nonprofits to help immigrants gain U.S. citizenship or remain in the country. And a law that kicked in last year provided drivers’ licenses to more than 600,000 people living in the country illegally.

But minority legislators in numerous states told the AP that their priorities have been stymied partly due to a lack of others like them.

For 22 years, Delaware state Senator Margaret Rose Henry has been the only black senator in a state where African-Americans comprise more than one-fifth of all residents. Henry says she has long sought to improve the educational opportunities for black children bused under a Wilmington desegregation plan to suburban schools. But recommendations from multiple studies have gone nowhere over the years.

Now, a new commission has recommended realigning Wilmington area school districts and revising the state funding formula to direct more money to schools with larger numbers of students who are low-income, learning English or at high risk of not completing school. Henry fears the plan will again be difficult to pass.

“If there were more black elected officials, we would have a better chance to get something done,” she says.