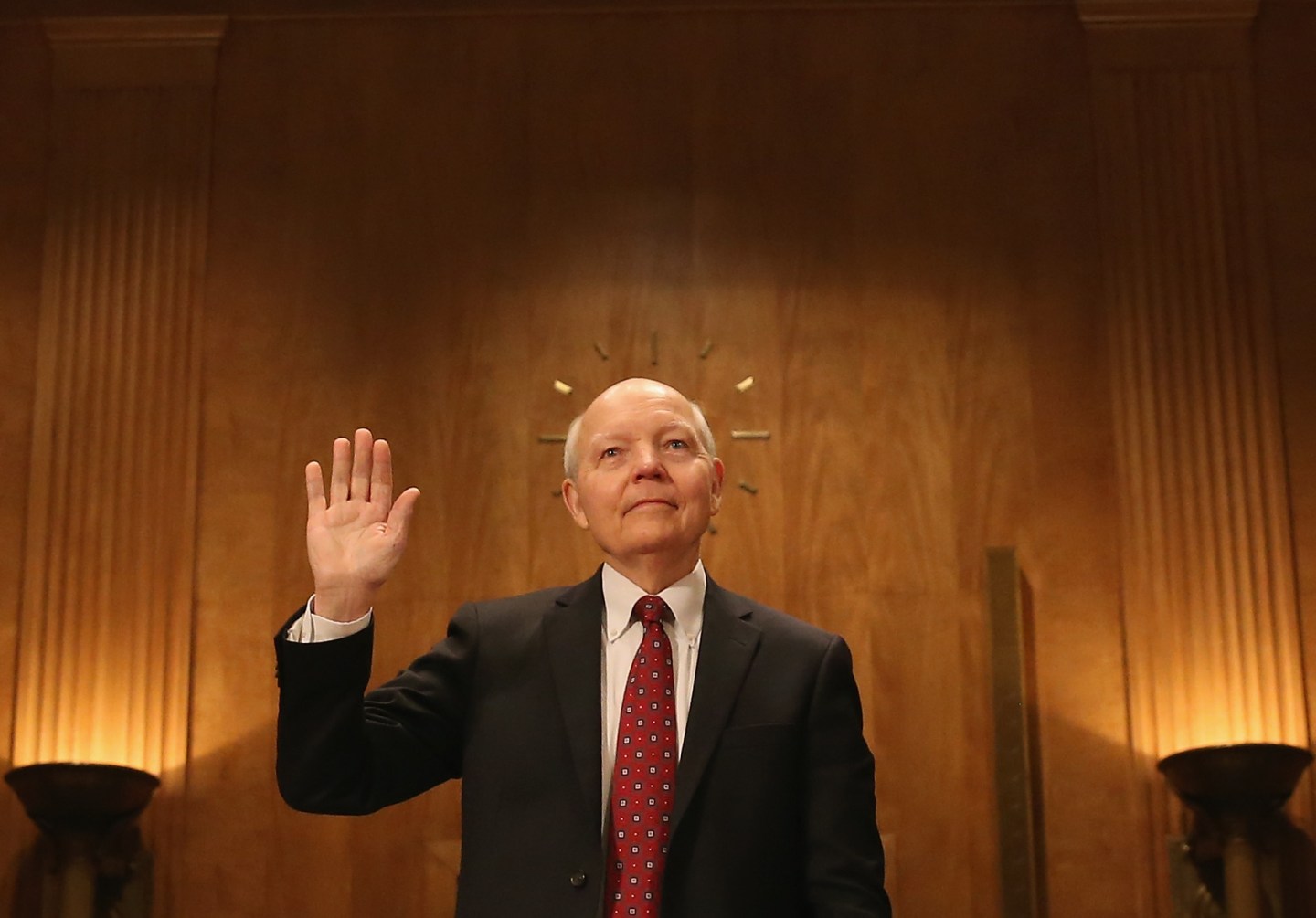 WASHINGTON, DC - APRIL 15: IRS Commissioner John Koskinen is sworn in before testifying before a Senate Homeland Security and Governmental Affairs Committee on Capitol Hill April 15, 2015 in Washington, DC. On the sixtieth anniversary of the Internal Revenue Services April 15th deadline the committee is hearing testimony on the IRSs challenges in implementing the Affordable Care Act. (Photo by Mark Wilson/Getty Images)
Photograph by Mark Wilson—Getty Images

A Republican-run House committee was poised to vote Wednesday on censuring the IRS commissioner, asserting that John Koskinen failed to provide information demanded by Congress and lied under oath as lawmakers investigated allegations the agency targeted tea party groups that had applied for tax-exempt status.

The expected partisan vote would send the matter to the full House, but Speaker Paul Ryan, R-Wis., has not said whether he would schedule a vote.

Rep. Jason Chaffetz, chairman of the House Oversight and Government Reform Committee, said Koskinen had made untrue statements to investigators examining the IRS’ treatment of conservative groups, including testimony the agency had turned over emails requested by Congress when it had not.

Koskinen erroneously testified that the IRS had preserved emails relevant to the investigation when in reality hundreds of backup computer tapes had been destroyed.

“Mr. Koskinen failed to testify truthfully before Congress,” said Chaffetz, R-Utah, charging that the agency under Koskinen dragged its feet in producing key evidence and in reporting that employees had destroyed emails sought.

Democrats said Republicans had jumped to conclusions unsupported by the evidence. They cited testimony by the agency’s own watchdog, a Republican appointee, who did not identify political targeting of tea party groups or obstruction of the investigation.

“Your core accusation against Commissioner Koskinen is that he was deceitful, that he misled Congress. But you completely disregard the difference between a misstatement and a lie,” said the committee’s top Democrat, Maryland Rep. Elijah Cummings. “You ignore the fact that Commissioner Koskinen testified before us based on what he knew at the time. You suggest this distinction does not matter, but it does.”

Chaffetz and other conservatives have pushed since last summer to impeach Koskinen and remove him from his job. Koskinen says the impeachment charges without merit.

The censure resolution under consideration calls for Koskinen’s resignation and for his pension to be taken away, but measure is not binding.

GOP leaders have displayed no enthusiasm for impeaching Koskinen, and any such move would be the responsibility of the House Judiciary Committee.

Republicans in Congress have long detested the IRS and have slashed its budget in recent years. The agency apologized in 2013 for subjecting conservative groups seeking tax-exempt status to unusually tough scrutiny.

The IRS says it has fully cooperated with four congressional committees investigating the agency.