Donald Trump Says Hillary Clinton Is Corrupt — Is He Right? 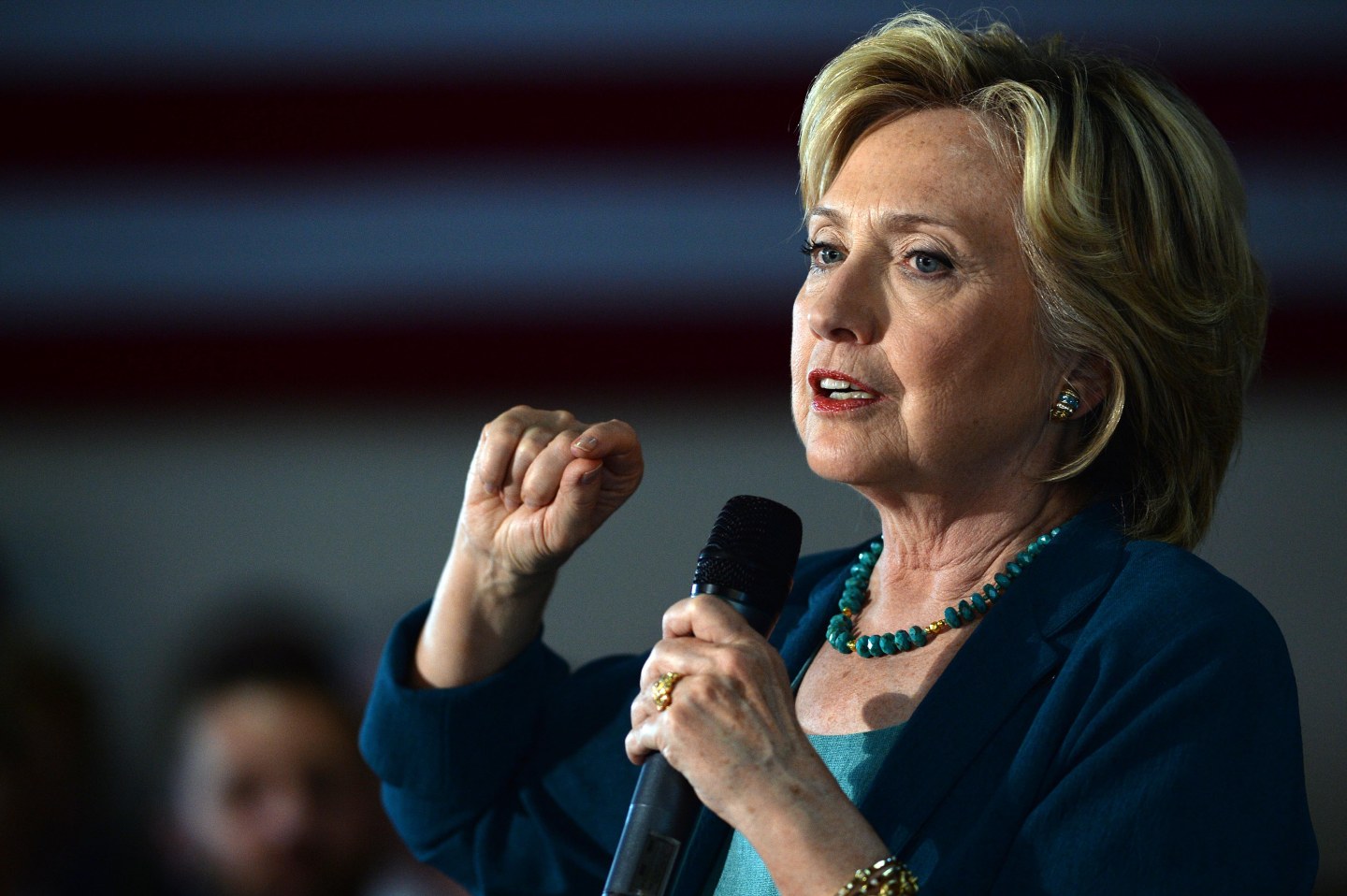 Presidential elections are arguments about history.

Four years ago—when both Democrats and Republicans believed they were just one election away from breaking the fever of Washington gridlock—this argument was about the historical causes of American prosperity.

But in 2016, the debate will be about personal history. Last Tuesday, Donald Trump promised that his first major speech after Hillary Clinton captured the Democratic nomination would focus on Hillary and Bill Clinton’s past scandals. His plans have changed in the wake of the mass shooting in Orlando, and it appears that Trump will now discuss terrorism and gun violence in America. But if Trump’s sobriquet for Secretary Clinton, “Crooked Hillary,” is any indication, it won’t be long before Trump refocuses his messaging on the idea that Hillary Clinton is corrupt.

Of course, Trump’s coming attacks will merely mark a continuation of a theme of the Democratic primaries. Senator Bernie Sanders questioned the ethics of Hillary Clinton’s acceptance of upwards of $250,000 a pop to give speeches to companies like Goldman Sachs. But Sanders generally avoided Hillary and Bill Clinton’s long history of questionable decisions like accepting compensation and favors from people and institutions trying to curry favor with one of the most powerful couples in America.

We should expect no such reticence from Donald Trump. And the Manhattan businessmen has not proven able to reliably distinguish between legitimate criticism of his opponents and wild, unfounded conspiracy theories. Voters should expect to hear plenty of accusations that Hillary Clinton is corrupt, but what are the facts? Here are four of the most important scandals in Clinton history.

In 1978, when Bill Clinton was Arkansas Attorney General and was preparing to stage his first run for Governor, Hillary Clinton decided to supplement her family’s income through speculating in cattle futures markets. At the advice of lawyer Jim Blair, whom the New York Times described as “the primary outside lawyer for Tyson Foods,” Clinton decided to invest $1,000 with the now defunct commodities broker Refco.

Within a year, Clinton turned her initial $1,000 into $100,000. Though many investors were making a killing in the cattle futures market in the late 1970s, research published in the Journal of Economics and Finance estimates that the odds of realizing the sort of gains Clinton was able to capture were 1 in 34 trillion.

This is why critics speculate that Blair and the brokers at Refco put their thumbs on the scale to make sure that the Clintons profited from these trades, all to curry favor with a rising star in Arkansas politics. How could this have happened? Here’s how Newsweek described it when the scandal broke in 1994:

There is no hard evidence that Clinton’s investing success was the result of anything but amazing luck, but Bill and Hillary’s willingness to accept advice from and maintain close, mutually beneficial relationships with powerful figures is a theme that has run through the Clintons’ political careers.

The most consequential scandal in Clinton history—it indirectly led to revelations about Bill Clinton’s affair with Monica Lewinsky— also has its roots in the Clintons’ attempts to supplement their incomes. The term Whitewater refers to a real estate investment that the Clintons engaged in with their associates Jim and Susan McDougal in 1978, located on the White River in Marion County, Arkansas.

The plan was to subdivide the investment into vacation-home plots and to resell the real estate at a profit. The Clintons timed their purchase poorly, however, as rising interest rates and an economic downturn put a damper on demand for vacation homes. The Clintons lost money on the investment, and though there were questions as to why it didn’t lose them as much money as their partners, the more significant accusations of impropriety surrounded the 1986 failure of a savings and loan that McDougal bought years after the initial Whitewater investment.

McDougal’s bank—Madison Guaranty Savings and Loan —ran into trouble during Bill Clinton’s second term as Arkansas Governor. And critics, armed with aggressive reporting by the New York Times, alleged that Clinton installed a pliant ally as Arkansas securities commissioner in order to buy McDougal time to raise needed capital when regulators should have been stepping in to declare the bank insolvent. Meanwhile, Hillary Clinton was serving as Madison Guaranty’s lawyer as it tried to avoid running afoul of Arkansas and federal regulators, adding to the perception that the Clintons were motivated to give official favors to their investment partner.

Despite years of investigations by the United States Senate and a special prosecutor, however, no one ever proved the Clintons doled out illegal benefits to McDougal.

As one of the youngest ex-presidents in history, it is only natural that Bill Clinton would want to leverage his stature to continue promoting the causes that were dear to him as a public servant. But the forty-second president did not pursue this goal in a traditional way. He launched the Clinton Foundation a year after he left office and over the years built it into a non-profit juggernaut (the foundation says it brought in $337 million in 2014). At the same time, Hillary Clinton became a senator from New York and was later appointed Secretary of State.

Critics alleged that Bill Clinton’s fundraising, which in many cases came from foreign billionaires who have reason to court influence in the United States government, created at the very least the perception of quid-pro-quo corruption, in which big dollar donations to the Clinton Foundation won favorable treatment from Hillary Clinton in her roles as senator and Secretary of State.

This was the argument of a book released last year by conservative writer Peter Schweizer called Clinton Cash, which claimed to have discovered several examples in which big donations from wealthy foreigners led Hillary Clinton to give official favors. Schweizer found no hard evidence of a time when Hillary Clinton changed her opinion on an issue of concern or provided an official favor for a Clinton Foundation donor.

The examples in Schweizer’s book do show that Bill Clinton leveraged the connections that he made as president to help the foundation’s donors at the same time that his wife was serving as a senator and Secretary of State circumstances that at the very least create the temptation to commit corrupt acts.

But even if donations to the Clinton Foundation had no effect on Secretary Clinton’s decisions at the State Department, the fact that the Clinton Foundation continued to accept donations from powerful foreigners and foreign governments while Hillary was Secretary of State is troubling. Even if these donations did not lead to favors, Bill and Hillary Clinton violated an agreement they made with the Obama Administration to cease accepting these sorts of donations and showed they were willing to risk the public’s trust to further their work, however noble it may be.

The Clintons have amassed considerable wealth, largely through speaking fees. A CNN analysis showed that the Clintons earned $153 million from speaking gigs since Bill Clinton left office in 2001, with millions of those dollars coming from large banks like Goldman Sachs, a fact that Bernie Sanders did not tire of pointing out to voters.

It’s impossible to know whether these payments influenced Hillary Clinton’s treatment of her benefactors in her official roles, or whether they will influence her decisions as president. But even the fiercest Clinton defenders wonder why Hillary Clinton does not seem to understand how upsetting accepting such payments is to voters, especially when Clinton has claimed that there is too much unaccountable money in politics.

So, is Hillary Clinton corrupt?

In a country where money is the essential fuel for political success, no politician, save for those who are independently wealthy, can avoid the seemingly contradictory task of courting rich donors all to represent the majority of Americans who aren’t affluent. We should remember that it is fairly uncommon for people like the Clintons, who weren’t already wealthy, to ascend to the highest levels of American power. The fact that the Clintons (Bill, in particular) are more familiar with how the other half lives than most politicians should be comforting for those who think that money has too much influence on the American political process.

That said, there are plenty of troubling details in Hillary Clinton’s past, even if there isn’t evidence of quid-pro-quo arrangements with her benefactors. If corruption is a vice against which our leaders must be ever vigilant, then Hillary Clinton is not actually a shining example of such discipline.

Clinton has argued in recent months that her record of fighting against moneyed interests serves as proof that, however she may have personally benefited from her associations with the rich and powerful, she has consistently fought on the side of the little guy. The Democratic primaries showed that most Democrats are willing to buy this argument, but Donald Trump will spend the summer and fall cross-examining this argument. Because there is no cut and dry evidence that Hillary Clinton is in fact “crooked,” as Trump likes to call her, he’ll rely on rumors and innuendo to make his case.

It’s unclear if Trump will be successful, but you can trust that the 2016 election will in part be an effort to determine what makes a corrupt politician and whether Hillary Clinton is one.