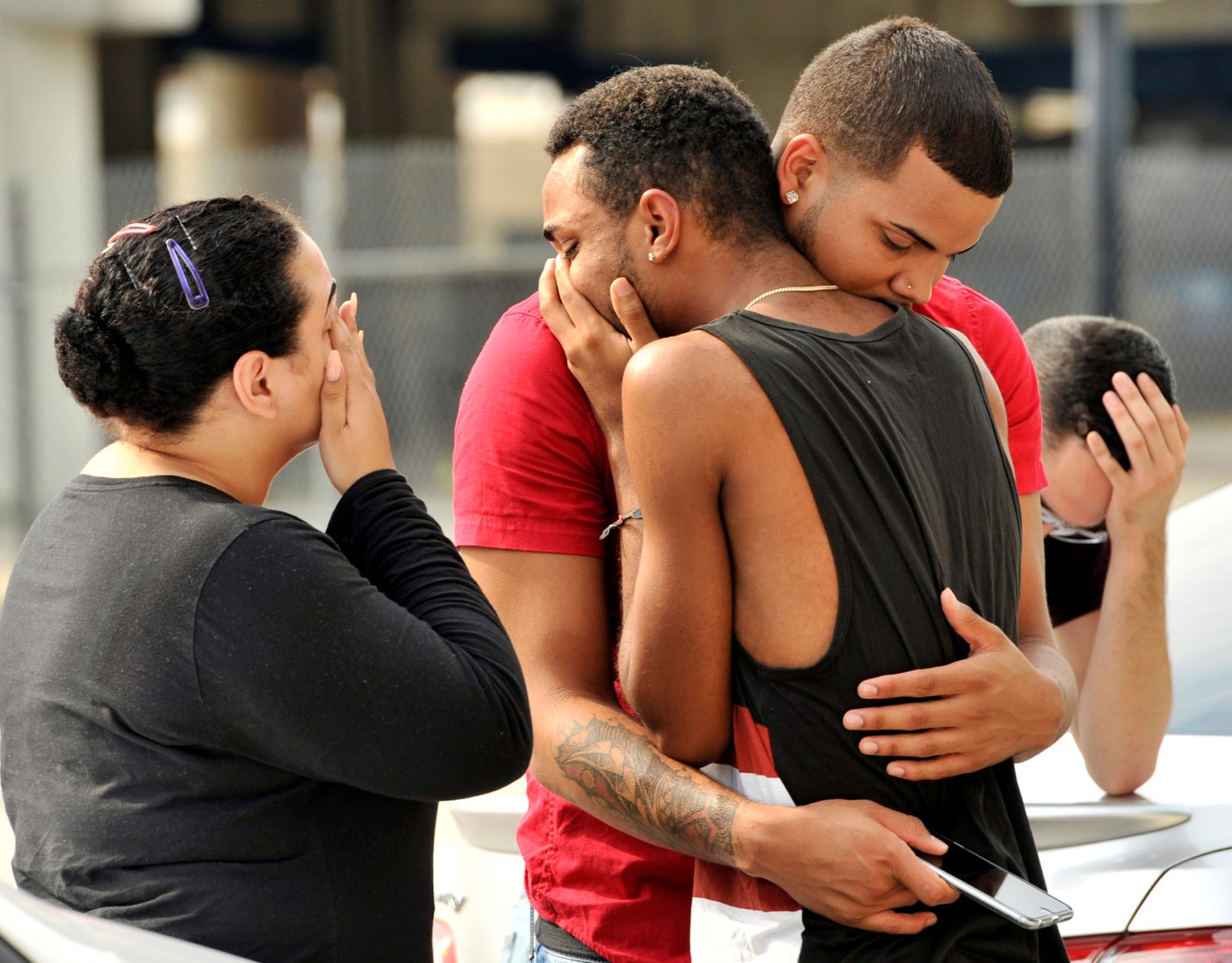 Friends and family members embrace outside the Orlando Police Headquarters during the investigation of a shooting at the Pulse night club, where as many as 20 people have been injured after a gunman opened fire, in Orlando, Florida, U.S June 12, 2016. REUTERS/Steve Nesius TPX IMAGES OF THE DAY - RTX2FU6A
Steve Nesius — Reuters

50 people were killed and 53 injured in what authorities are investigating as an act of terrorism.

A police officer working as a security guard inside the Pulse club exchanged fire with the suspect at about 2 a.m., police officials said.

A hostage situation quickly developed, and three hours later a squad of officers entered the club and shot dead the gunman. It was unclear when the gunman shot the victims.

Vox reports that this is now “the deadliest mass shooting in American history,” surpassing the death toll of 32 at Virgina Tech and 27 at Sandy Hook.

“Whether that is domestic terrorist activity or an international one, that is something we will certainly get to the bottom of.”

When asked if the FBI suspected that the gunman may have an extremist leanings, including a possible sympathy with Islamic State, Ronald Hopper, an assistant FBI agent in charge, said: “We do have suggestions that the individual may have leanings toward that particular ideology. But right now we can’t say definitively.”

President Barack Obama ordered the federal government to provide any assistance needed to Florida police investigating the shooting, the White House said in a statement.

Obama was briefed by Lisa Monaco, Assistant to the President for Homeland Security and Counterterrorism, and had asked to receive regular updates, it said.

At least one officer was injured in the gunbattle but the decision to storm the club saved at least 30 lives, Orlando Police Chief John Mina told a press conference.

The suspect was carrying an assault-type rifle and a handgun as well as an unidentified “device” on him, Mina said.

Javer Antonetti, 53, told the Orlando Sentinel newspaper that he was near the back of the dance club when he heard gunfire. “There were so many (shots), at least 40,” he said. “I saw two guys and it was constant, like ‘pow, pow, pow,’.”

Video footage showed police officers and civilians carrying injured people away from the club and bending over others who were lying on the ground. Dozens of police cruisers, ambulances and other emergency vehicles could be seen in the area.

Police said they had carried out a “controlled explosion” at the club hours after the shooting broke out, but did not explain why that was done.

Hours after the rampage ended, family members and friends were in the neighborhood trying to locate loved ones who were missing and believed to have been at the club. Police set up a restricted perimeter around the club to keep people away.

A woman who would not give her name was concerned and frustrated early Sunday as she tried to find a young man who had been at the club. She said the man was like a nephew to her and had not been heard from since the shooting. “We’ve been trying to reach him but we haven’t heard anything.”

It was the second deadly shooting at an Orlando night spot in as many nights. Late Friday a man thought to be a deranged fan fatally shot Christina Grimmie, a rising singing star and a former contestant on “The Voice,” while she was signing autographs after a concert in the Florida city.

This article includes updates from Reuters, Time.com, and Fortune editors.