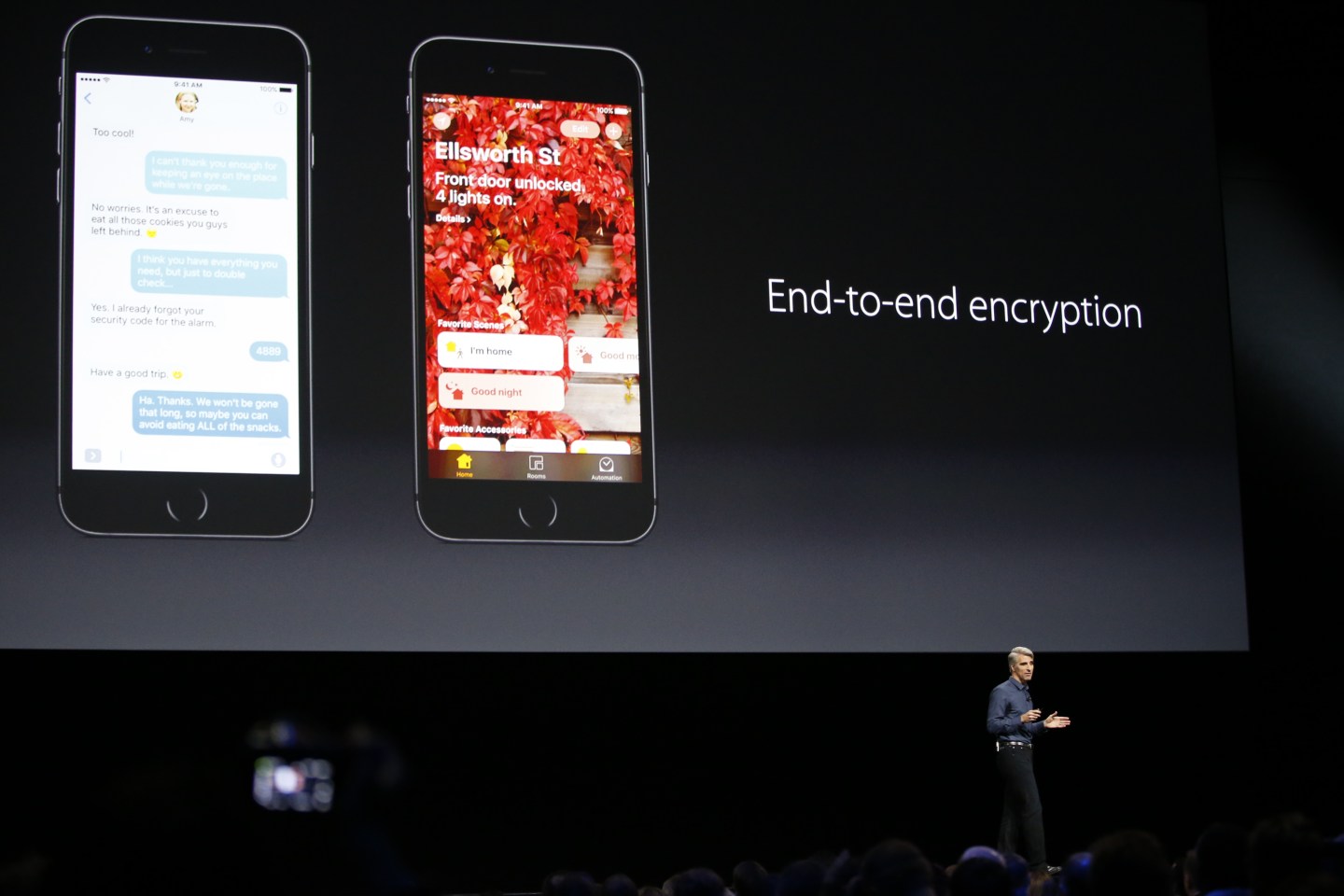 No Apple event would be complete without an executive touting the company’s favorite product feature: privacy.

After mentioning at the company’s worldwide developers conference on Monday that outside developers would be able to build their own services inside Apple’s messaging app, Craig Federighi, Apple’s senior vice president of software engineering, reaffirmed the company’s commitment to respecting users’ privacy above all else.

“All of this great work in iOS 10 would be meaningless if it came at the expense of your privacy,” he said on stage at the event in San Francisco.

Apple has been casting itself as a protector of user privacy in recent years, particularly earlier this year when it battled the Federal Bureau of Investigation in a high-profile case involving accessing encrypted data stored on an iPhone used by one of the San Bernardino terrorists. The company refused to help law enforcement gain access to the data.

Federighi talked about the data-scrambling encryption in iMessage and FaceTime that protects communications from eavesdroppers by default. Then he moved on to explain how the company is balancing the data analysis that Apple does on its users with their privacy.

“When it comes to performing advanced deep learning and artificial intelligence analysis of your data, we’re doing it on device, using the incredible power of the silicon on your iPhone and your Mac, keeping your personal data under your control,” he said. In other words, when Apple processes personal data, it does so on people’s personal devices rather than on the company’s servers, keeping it closer to customers.

Apple’s more personal approach to crunching its users’ data on their own hardware contrasts with Google’s cloud-based approach. Privacy advocates roundly criticized the latter when it debuted Allo, a chat app that critics say implements weakened security measures when shuttling data through the Google’s servers.

“We don’t build any user profiles,” Federighi said about the information that online companies typically collect about user activity, including the sites they visit and what they search for. Behind him a slide stating “No user profiling” punctuated his subtle dig at rivals like ad-tech giants Google (GOOG) and Facebook (FB), which are known for collecting vast data stores about their customers.

But some people say that Apple’s privacy stance has hurt it when it comes to its innovation in machine learning, a buzzy computer science field that teaches software to perform tasks once solely suited to humans. Recently, Marco Arment, former lead developer of Tumblr, now owned by Yahoo (YHOO), said he worried that Apple was losing ground to others in the race to build what might be the next big thing in tech: artificially intelligent systems.

In his speech, Federighi seemed to speak directly to such criticisms. “Now, of course, one of the important tools in making software more intelligent is to spot patterns on how multiple users are using their devices,” he said.

And Federighi had a ready retort for the naysayers. He said the company is leading the way in “differential privacy,” a field that, in his words, “uses hashing, sub-sampling, and noise injection to enable this kind of crowdsourced learning while keeping the information of each individual user completely private.”

Translation: Apple is moving forward in assistive artificial intelligence—and is doing so in what it claims to be the most responsible way to protect user privacy.

“We brought in the professor and researcher who literally co-wrote the book on differential privacy for a quick peek at what we were doing,” Federighi said, grinning at the audience. “He described the work as groundbreaking.”

Behind Federighi a slide bore a quote from the academic, Prof. Aaron Roth, a privacy researcher at the University of Pennsylvania. “Incorporating differential privacy broadly into Apple’s technology is visionary, and positions Apple as the clear privacy leader among technology companies today,” the quote read.

(Federighi did not offer further details, such as whether Roth had been paid by Apple.)

“We believe you should have great features and great privacy,” Federighi concluded. “You demand it, and we are dedicated to providing it. ”

Federighi’s remarks on security and privacy came about an hour and 40 minutes into the event and lasted for only a couple of minutes. (You can watch the whole event here.)

The company is clearly pushing to brand itself as pro-privacy, though similar remarks made at earlier Apple events—like Cook’s statements in June, when the FBI battle was in full force—received more prominent placement in past lineups.