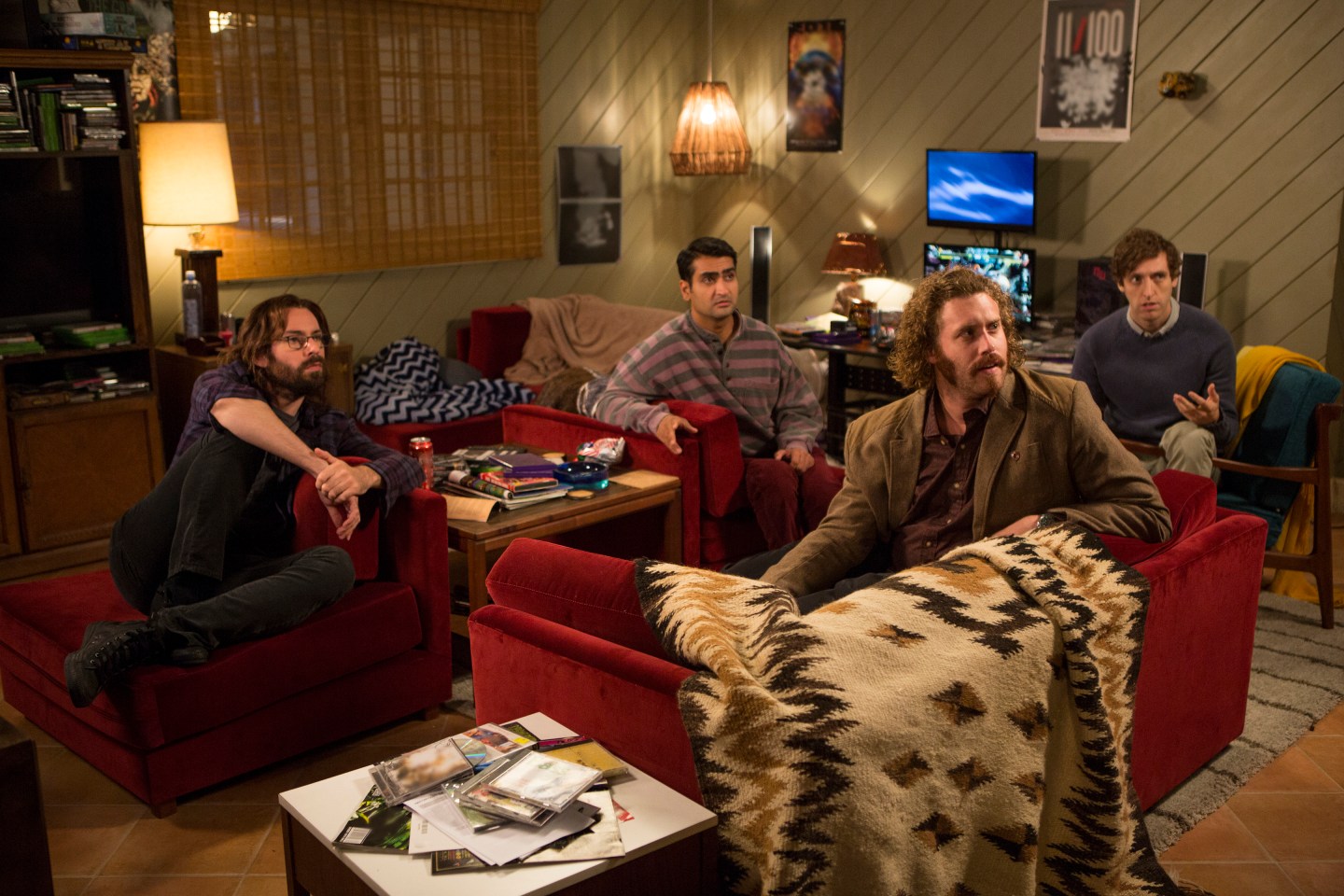 For a place where gym shoes are standard work attire and suits are scoffed at, Silicon Valley is surprisingly preoccupied with appearances.

No, not the fashion kind of appearances, but rather how outsiders view one’s startup. As the eight episode of HBO’s Silicon Valley show opens, early Pied Piper investor Erlich Bachman struggles to tell CEO Richard Hendricks that he has sold his shares in the startup to cover his debts. Even 10 days after the sale, he’s yet to tell Hendricks, and the company continues to get increasing attention thanks to its newly released app for squeezing files into a tiny size.

Unfortunately, rumors that some Pied Piper stock has already been sold have already started to circulate. Hendricks and Jared Dunn, Pied Piper’s business guy, find out just as they interview a prospective head of PR for their startup.

“That would be a pretty severe signal,” says the candidate after he tells them he spotted a stock sale document at the office of Pied Piper’s main investor. “You don’t have to work in PR to know that insiders only dump stock like that when they know something is wrong.”

In Silicon Valley, investors usually back chosen startups because they believe they have potential. That’s why they purchase a piece of a startup in exchange for money—it’s a vote of confidence in the company. But as the prospective PR guy pointed out, selling off stock so early in a startup’s life can often send a negative signal.

When Hendricks finally finds out about Bachman stock sale after calling Monica Hall, an employee of Pied Piper’s main investor, he confronts Bachman at a particularly ridiculous unicorn-themed photo shoot for Pied Piper, adding that he’ll have to issue a press release to avoid any potentially damaging and inaccurate rumors.

“This is Silicon Valley—rumors spread like light speed here!” a frustrated Hendricks shouts. “How are we gonna get good people to work for us if they think something funky is going on with our stock? How are we gonna scale? This is gonna kill us!”

An apologetic Bachman admits that he’s embarrassed that he lost all his money in a disastrous venture with a former Pied Piper employee who was given $20 million as severance from Hooli, the show’s Google-like (GOOG) company.

“I’m broke. Erlich Bachman, the name that used to be synonymous with success, went broke and was forced to sell,” he tells Hendricks, also comparing himself to Ron Wayne, one of the Apple original co-founders who sold his 10% stake back to the company for $800 and later forfeited any rights for another $1,500.

Wayne has since said that he had a change of heart because he didn’t want to take on the potential risk that a new startup like Apple could bring, especially after his own slot machine company failed. But unlike Bachman’s claim that if news gets out that he sold his Pied Piper stake, “no one in this town will work with [him] again,” Wayne didn’t exactly become a business outcast solely for that decision. Instead, he spent some time at the Lawrence Livermore National Laboratory, as well as an electronics company in California, and is now retired in Nevada where he also sells rare stamps and coins.

For Fortune’s recap of the previous episode, read: HBO’s “Silicon Valley” Takes on the Haters

Bachman’s embarrassment is later echoed by Russ Hanneman, an egotistical investor who financed Pied Piper early on but later sold his shares to the startup’s main investor, when he runs into Hendricks at a swanky hotel where Vanity Fair is hosting a fancy party for the who’s who of Silicon Valley.

“It’s fucking humiliating, losing all your money,” he tells Hendricks. “You think when I dropped below a billion, I walked around telling everybody? Fuck no,” he adds of his personal tragedy of temporarily being worth less than $1 billion in a previous season of the show.

Hendricks also learns that Bachman first attempted to sell only half his stock to Hanneman, but the deal was killed by Pied Piper’s main investor who has the ability to approve any and all stock sales. Laurie Bream, of that venture capital firm, ultimately forced Bachman to sell her all his shares and for exactly the amount of his debts: $713,000.

Meanwhile, Hooli founder and CEO Gavin Belson is running is own PR campaign as he tries to put a positive spin on his failed attempts to compete with Pied Piper. Belson has spent more than $750 million so far, including two separate projects to build a rival service. And yet, his desire to squash Pied Piper hasn’t died.

“We’ve taken a page from Apple’s play book and are currently reviewing the Pied Piper app at a pace one might call… tortoise-like,” he says.

Just like Google and Apple, Hooli also has an operating system for smartphones and with that, an app store. Apple’s app approval process has notoriously been slow and at times opaque, and it has rejected or removed apps in the past that competed with its own or went against its own business interests. In 2012, Apple famously blundered when it removed Google’s map app from iOS, replacing it with its own, which at the time was quite unusable. Eventually, Apple explained that it did so because Google’s iOS app wasn’t as up-to-date as the Android version.

Nevertheless, his board is fed up and is firing him.

“I built this company with my bare hands in my fucking garage—where were you when I was doing that?” an angry Belson responds in reference to the famous beginnings of some of Silicon Valley’s biggest companies like Apple and Google, which all began in suburban garages.

Belson later runs into Jack Barker, the professional CEO hired an quickly fired from Pied Piper, just as the two prepare to climb into their respective private jets for a short vacation in the same place. The two agree they should catch up while there and Barker offers to play online chess with Belson during their flights because he looks like he “could use some company.”

But at least one character found redemption: After reading Bachman’s “tell-all” in the tech news blog he also happens to own, Hendricks offers him a position as Pied Piper’s head of PR. Or, as Bachman calls it, “Chief Evangelism Officer.”