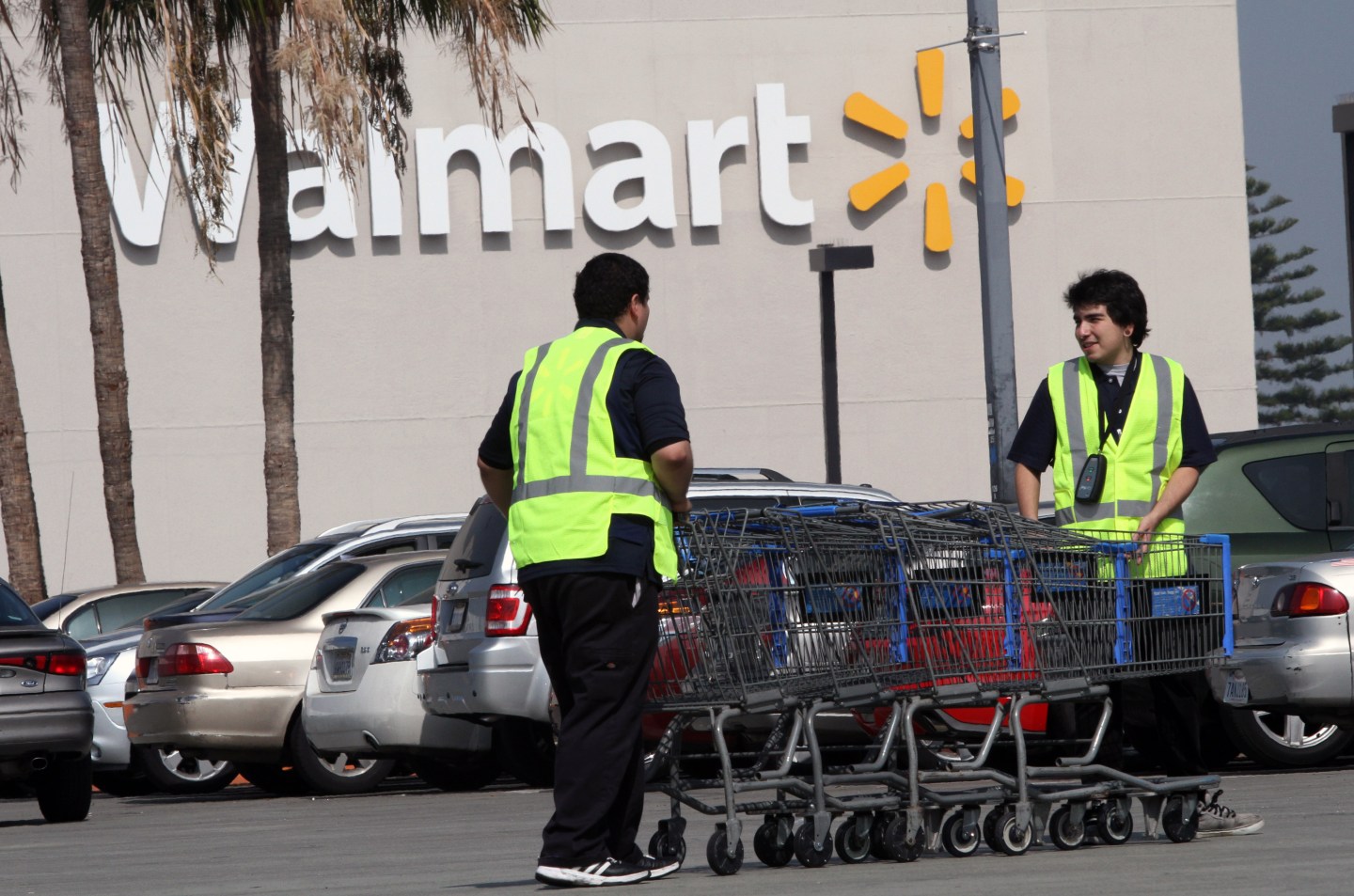 LOS ANGELES, CA - FEBRUARY 19: Workers retrieve shopping carts at the Crenshaw Plaza parking lot near the Wal-Mart on February 19, 2015 in Los Angeles, California. Wal-Mart Stores Inc. announced today that it was increasing employee's wages in the U.S. to at least $9 an hour, $1.75 above the federal minimum wage, to take affect in April. (Photo by Bob Chamberlin/Los Angeles Times via Getty Images)
Photo by Bob Chamberlin — LA Times via Getty Images

Wal-Mart (WMT) would have to spend an additional $4.95 billion if it were to raise the minimum wage for its hourly employees in the United States to $15 per hour from the current $10 per hour, according to an estimate by the UC Berkeley Center for Labor Research.

As the country’s largest private employer, Wal-Mart employs nearly 1.5 million people in the United States. Of that, 1.1 million are hourly employees, according to the study. The study estimated that 979,000 employees would get an increase if Wal-Mart went to $15 per hour.

The world’s largest retailer raised wages for its hourly workers to $10 per hour earlier this year, but labor groups have called the raise inadequate. They have been demanding a $15 minimum wage, and the “Fight for Fifteen” movement has been a topic of discussion during the U.S. presidential campaign.

The research was released last week and has so far not been reported widely by the media. It was conducted at the request of OUR Wal-Mart, a union-backed group.

READ: 5 Things You Don’t Know About Walmart (But Should)

A $15 per hour minimum wage would mean an annual hike of $4,006 for part-time employees and $5,836 for full-time employees, the study showed.

The study used government data and worker surveys rather than internal numbers provided by Wal-Mart. The study used the $10 increase in hourly wages at the start of the year as a baseline and simulated that to calculate the results for $15 an hour.

Wal-Mart spokesman Kory Lundberg declined to comment on the wage estimates. He said the retailer is investing $2.7 billion over two years in training, education and higher wages.

In an online opinion piece on the study, Christine Owens, executive director of the National Employment Law Project said, “Wal-Mart can easily afford the $15 minimum wage,” based on the retailer’s annual earnings.

“An employee working 34 hours per week at $10 per hour still earns less than $18,000 per year and cannot meet her family’s basic needs on Wal-Mart’s wages alone, even in states with low costs of living,” she said.