This Will Be Obama’s Legacy to U.S-India Relations 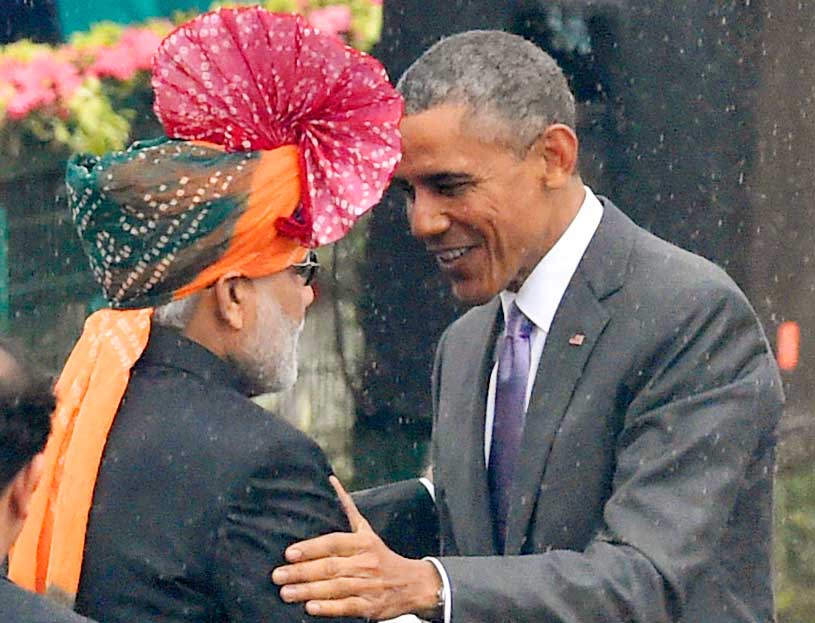 NEW DELHI, INDIA - JANUARY 26: President of United States of America (USA) Barack Obama and Prime Minister of India Narendra Modi during the ceremony of 66th Republic day of India, at Rajpath, on January 26, 2015 in New Delhi, India. President of United States of America (USA) Barack Obama is the Chief Guest for this Republic Day. Rain failed to dampen spirits at India's Republic Day parade January 26 as US President Barack Obama became the first US president to attend the spectacular military and cultural display in a mark of the nations' growing closeness. Colourful images of India's cultural heritage, manoeuvres by fighter aircraft, military prowess and march past by armed forces were on majestic display. The main attractions of the parade were scintillating show of air power, fascinating Tableau depicting the diverse culture and dance by colourfully dressed schoolchildren. Around 25,000 security personnel were deployed across the city while the commandos of the Indo-Tibetan Border Police and Delhi Police kept vigil at important locations. (Photo by Sonu Mehta/Hindustan Times via Getty Images)
Photograph by Sonu Mehta — Hindustan Times via Getty Images

Earlier this week, Prime Minister Narendra Modi of India visited President Obama, marking his second visit to the White House in two years. Like his two immediate predecessors, Obama has made special efforts to expand ties with India. Against the backdrop of a tough external environment— Iraq’s chaos, a truculent Russia, China’s increased assertiveness, unending conflict in Afghanistan—the U.S.-India relationship stands out as a rare bright spot, one that has spanned Democratic and Republican administrations alike.

Former president Bill Clinton opened the door to India in 2000 after decades of estrangement. And after him, George W. Bush recognized India’s strategic importance, and pushed through a civil-nuclear deal that permitted nuclear energy cooperation with India and brought the country inside the global nonproliferation tent. With the conclusion of Indian Prime Minister Narendra Modi’s three-day visit to Washington yesterday, one thing is clear: Obama’s support for nurturing ties to India will be marked by his work with one of the world’s largest industrializing economies to curb climate change and support clean energy. This is not to suggest that the Obama administration has not advanced ties in other areas—including defense, counterterrorism, and homeland security—but to point out new ground covered during his presidency.

From the beginning to the end of his two terms in office, Obama has made a bet on clean energy, and in Modi’s India he has found an enthusiastic partner. President Obama has expanded clean energy cooperation with India more than any previous U.S. administration. This will be his defining legacy for the burgeoning U.S. relationship with India.

Ahead of the prime minister’s arrival this week, many speculated that defense ties would be the big story, particularly with the finalization of text, after a decade of dialogue, for a logistics exchange agreement that will allow the two countries’ militaries to use each other’s bases. Defense is important, including the decision to treat India as a “major defense partner” for technology transfer.

Nonetheless, both countries agreed to make climate and clean energy cooperation a priority and outlined steps to advance these causes in a joint statement following the summit.

These measures will have a global impact, given India’s 1.3 billion people, its rapidly-industrializing $2.3 trillion economy, and its hundreds of millions of poor citizens who will use more energy as their incomes and standard of living rise. On a per capita basis, India’s carbon emissions are just one-ninth those of the United States, and India remains a much smaller emitter of emissions, in absolute terms, relative to China and the United States. But due to its size, India nonetheless is the third-largest source of carbon emissions. India therefore seeks low-carbon growth to power its economy without poisoning its atmosphere, while the U.S. sees the same goal as a vital global good.

The summit brought long-awaited news that Westinghouse Electric would at last begin site work on six nuclear energy reactors in India, albeit with contract negotiations still under way. This marks the transition from the diplomatic slog begun under the George W. Bush administration in 2005 to the actual commercialization of civil-nuclear ties. Modi and Obama “noted the intention of India and the U.S. Export-Import Bank” to cooperate toward a financing package to help nudge this enormous clean energy infrastructure undertaking along. Nuclear energy will not be able to supply all of India’s fast-growing energy needs, but it will position India with a stable supply from a renewable source to add to India’s overall energy mix, which is currently largely dependent on oil from the Middle East.

Among other initiatives, officials this week announced efforts to finance clean energy projects, including plans for both India and the U.S. to raise up to $400 million to deliver renewable energy to “up to 1 million households by 2020. A new “U.S.-India Clean Energy Hub” will serve as a single-window to organize renewable energy investment to India. The U.S. and India also agreed to establish the “U.S.-India Catalytic Solar Finance Program,” which is expected to attract private investments of up to $1 billion for projects on a smaller scale. Reference to technical support for a rooftop solar initiative in India, and a “Greening the Grid” initiative all appear in the joint statement. A $30 million public-private smart grid initiative will support research.

Taken together, these efforts flow directly from the bilateral clean energy cooperation launched in 2009, at the start of President Obama’s first term. The Partnership to Advance Clean Energy (PACE), as the initiative is known, has to date secured more than $2.5 billion in public and private investment. The new announcements add another $1.4 billion to that total. PACE has developed a joint clean energy research consortium drawing on the scientific talents of both countries, and it has also supported targeted efforts (green buildings, smart grids) to deploy clean energy where it can make a difference.

India has consistently sought greater space to give its economy time to grow and raise living standards before making commitments to cap its carbon emissions. For this reason, the multilateral diplomacy with India has not been easy. But through its ambitious targets of installing 175 gigawatts of clean energy (100GW of that via solar), the Modi government has put forward another side of India to the world, an India that seeks to lead on the transition to renewables. The Modi-Obama joint statement includes a slightly ambiguous reference to implementing the Paris agreement—“as soon as possible this year” for the United States, and “work toward this shared objective” for India—but no ambiguity exists on the extent and range of joint undertakings on the clean energy front.

A year and a half ago, after the Modi-Obama Republic Day summit of January 2015, I wrote that clean energy was the next big idea in U.S.-India relations. This kind of cooperation takes place out of the diplomatic spotlight, and rests on the talents of scientists, energy experts, utilities, and leading-edge companies—not grand governmental gestures. For that reason, however, the successes achieved during this week’s meeting stand a better chance of having lasting and transformative effects.

Alyssa Ayres is a senior fellow and expert of India, Pakistan, and South Asia at the Council on Foreign Relations. She served as U.S. deputy assistant secretary of state for South Asia from 2010 to 2013.