Digg Launches a News Bot That Lives Inside Facebook Messenger 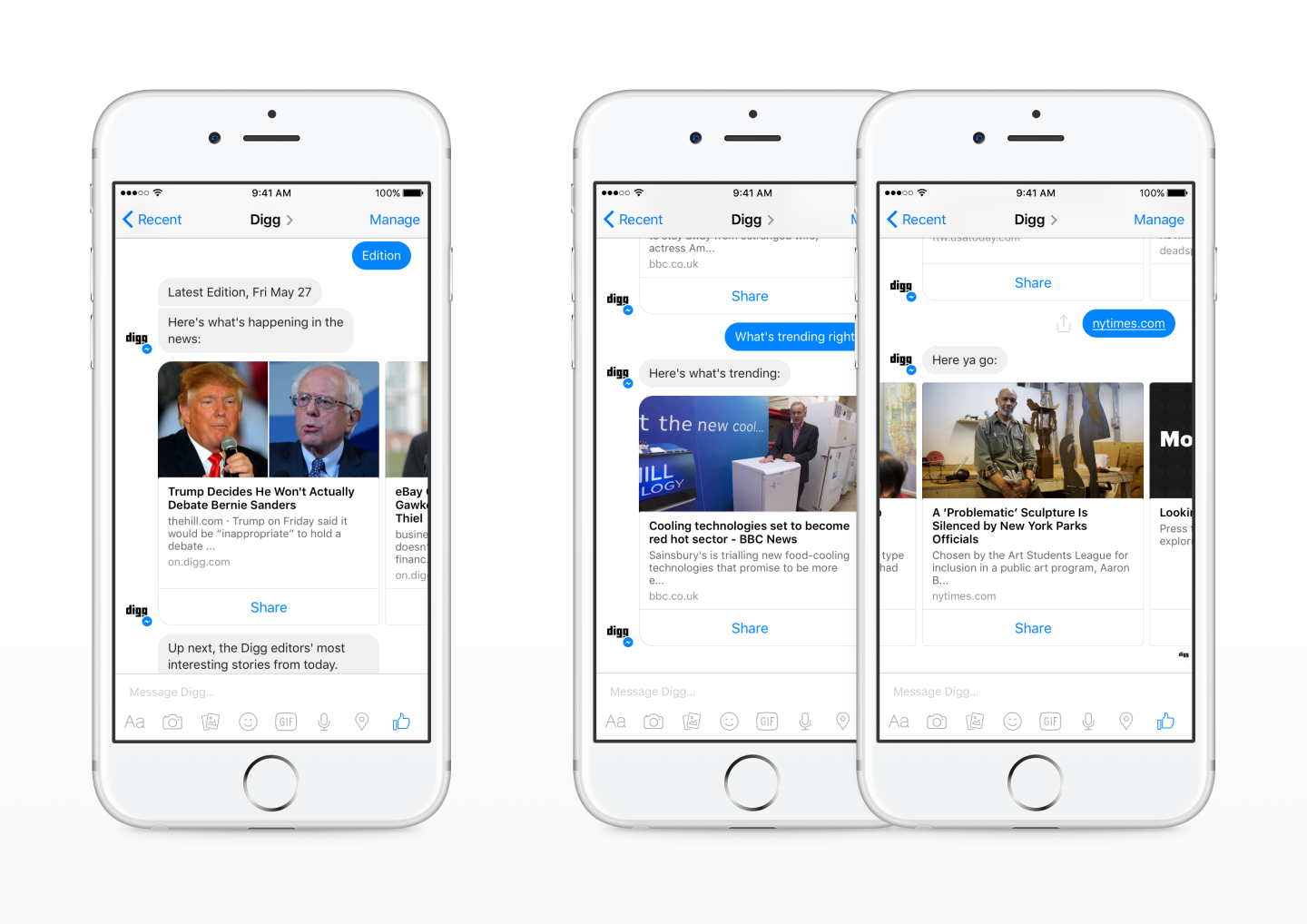 When the financial news site Quartz launched a new mobile app that looked and acted like a chat app earlier this year, it felt like a test run for something that might ultimately end up living inside and interacting with users through an existing messaging app. Now Digg has launched exactly that: An automated news-delivery service that lives inside Facebook’s Messenger.

There is no app for the new service, and there isn’t really a website for it either, although you can click on a link at the end of the twice-daily update it sends you (called Digg Editions) and see the items that have been automatically collected. But any of the other content that it sends you in response to requests is curated only inside Facebook’s messaging app.

Digg CEO Gary Liu said that the company—which was relaunched in 2013 by New York-based incubator Betaworks as a “front page for the Internet”—started thinking about developing a dedicated messaging bot or service because of the dramatic shift that it was seeing in user behavior towards messaging apps, especially among young millennials.

“Messaging apps now make up about 30% of all engagement on mobile, whereas news and content apps account for about 2%,” Liu said in an interview before the launch. In China, companies are already publishing content exclusively on WeChat, a social network with 700 million active users. Liu said Digg started to realize that links “are increasingly being shared not on Facebook or Twitter but directly into messaging apps, so it seemed like a huge opportunity.”

Interestingly enough, Digg isn’t calling its new service a bot. As Liu points out in a blog post, the idea of chat-bots has gotten a lot of hype, but the technology isn’t really effective enough yet to have an actual human conversation. Even Quartz’s chat-style app is mostly human beings simulating automated chat rather than actual chat, as is Facebook’s M.

At the moment, the main function of the service is to send you a news update twice a day, with eight or 10 items that are popular across the Digg network. Articles are curated both by algorithms that track what people are reading and sharing across the web, and by human editors who select from what is aggregated by those algorithms. Although the content won’t be personalized at launch, it will become so as Digg learns more about its users, Liu said.

Each item that Digg sends you shows up as a card with an image and headline, similar to what shows up in an expanded tweet on Twitter, and you can either click on the card or swipe left to see more. The service also suggests short responses you can choose from like “More,” but it doesn’t try to get too chatty and the responses are clearly canned. “Remember when you look for something, try and keep it simple for now,” it says at one point. “I’m not Siri over here.”

In addition to the twice-daily update, which is similar to the email newsletters that Digg and other sites send out with a range of top stories selected by editors, the Digg bot also responds to simple queries. For example, typing “Trending” will get a selection of the top most-shared posts from the Digg network, which consists of more than 7.5 million articles every day that are brought in via 10 million RSS feeds and about 200 million tweets a day.

Users of the Messenger bot can also type in a domain or website such as Fortune.com and see the most-shared articles from that domain, in the same card-type format, and they can type in keywords such as “NFL” or “techology” to see the top stories that correspond to those terms.

The Facebook messaging bot is actually Digg’s second news-delivery bot. The site launched a very similar service called Diggbot earlier this year, which lives inside Slack, the popular corporate messaging tool. Many of the same functions are available, and Liu said that Digg plans to roll out similar bots for other platforms.

Liu said that he believes Digg is uniquely positioned to provide a smart messaging app because the site has a huge amount of data about social behavior around content, but also has smart editors who curate the best of that content—so a combination of bots and humans.

“There are three major ways to rank content,” Liu said. “One is editorially based, with human beings deciding what should be on the front page, like a newspaper. The second is social — so you see things based on who your friends are, or who you follow. And the third is based on explicit and implicit user data, so either things I say I’m interested in or things that I show I’m interested in through my behavior—what I click on, what I share, etc.”

Twitter started out being based on the second of these approaches with social sharing, says Liu, but has tried to add the first as well, with human editors curating Moments. And Apple has based its Apple News on human editors combined with data. But Digg is one of the few that has the ability to combine all of these approaches, Liu says. “We think the best place to be in the future is at the intersection of all three of those strategies, and that’s where we are.”