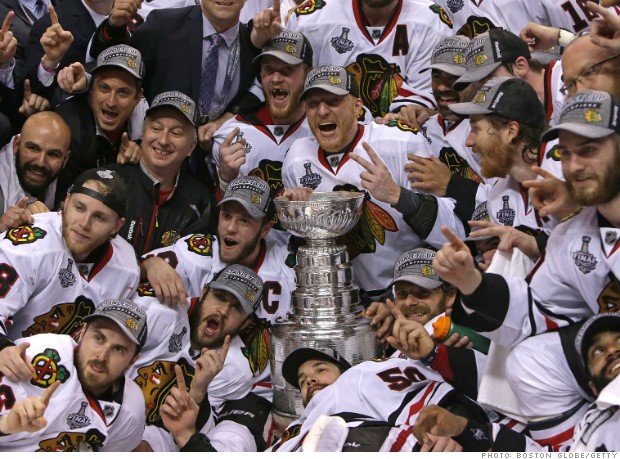 It felt like a slap in the face for this Canadian — and lifelong hockey fan — to learn that for the first time in 46 years, the birthplace of hockey is not represented in the NHL playoffs. Furthermore, the last time Canada won the Stanley Cup was in 1993, and the number of Canadian players in the NHL has been steadily waning.

But after I finished my slice of humble pie, I realized there was a greater lesson to be learned from my disappointment — one that speaks to the future of talent.

Hockey players, after all, want to play for teams they think will win. The same goes for any professional in the workforce. In order to attract talent and ensure that it stays — particularly in high-skill, high-demand areas like tech — employers must sell candidates on their organizations’ potential to outdo the competition.

For some organizations that means being an innovator; for others, it means showing a high-growth trajectory. For all, it means laying out exciting career paths that offer employees room to grow instead of cut-and-dried, “holding pattern” jobs. This applies to scrappy startups as well as to large multinationals.

Today, people and information can’t be contained. With the right coaching, new talent can emerge from anywhere, which brings me back to hockey. Canadian goalie coach Perry Wilson has been working to upskill players in Gore, New Zealand, as well as train kids to become the next generation of players, while this year’s likely No.1 hockey draft pick, 18-year-old Auston Matthews, hails from Scottsdale, Arizona — not exactly a hockey hotbed.

Companies, too, need to keep their sticks on the ice and be ready to embrace less traditional sources of talent as well as less polished resumes.

And that’s where recruiting the best talent and leaders comes into play. By 2040, 80% of the world’s working-age population will come from emerging markets. Competition for workers is growing in these markets, particularly in India, North America, and Asia, according to Mercer ‘s 2016 Global Talent Trends report.

Understanding these markets is not just important for securing talent, but also for securing a customer base. At my company (which was founded, incidentally, in Canada), we are focused on expanding into emerging markets beyond the 80 countries where we already do business. While “Canadianness” may once have been important to Mercer’s identity, it is becoming more global by the day.

Indeed, global companies may find their growth potential inhibited when their leaders all hail from the same geography. Diverse leaders, or at least those who have experience working abroad, are needed to develop a global talent pipeline, locate leaders in other markets, and fully understand their customers.

Developing this global mindset is particularly important in today’s boom time for mergers and acquisitions. With cross-border deals at an all-time high, companies need to be prepared to fuse very different workforces. Respondents to another of our recent surveys, People Risks in M&A Transactions, identified culture as their No. 1 challenge when it comes to combining organizations. These people risks affect productivity, profitability, and an organization’s likelihood to thrive in the months and years following the deal.

We can look to the U.S. hockey team with the most Canadian players, the Florida Panthers, for an example of a team successfully bringing together a wide range of nationalities and temperaments. As one of its Canadian stars, Aaron Ekblad, was recently quoted: “We’ve got a couple of Finnish guys, some Czechs, Russians, Americans… It doesn’t matter the nationality, we get along so well.” In the workforce as well as the rink, diverse teams can come together and win if they’re well managed, well led, and united behind a common goal.

Still, Canada is out of the running for the Stanley Cup this year. It pains no one more than me to come to terms with this cold fact. But it’s an icy wakeup call that countries, and companies, can no longer hang their hats (or helmets) on their reputations. Hockey may have been born and reared in Canada, but it’s now grown up and exploring the world all by itself. Places that were once considered hockey backwaters may well supplant their better-known counterparts in the years to come.

The same goes for any field in which an underdog company can quickly disrupt the industry (as Apple (AAPL), Dyson, or Netflix (NFLX) have all done). If sports teams, and organizations, are going to stay competitive into the future, they need to focus on innovation and finding the right talent wherever it may be. It all comes down to scoring those global goals.

Jacques Goulet is President of Mercer’s Retirement, Health, and Benefits business. Previously, he was the Retirement business leader for North America.