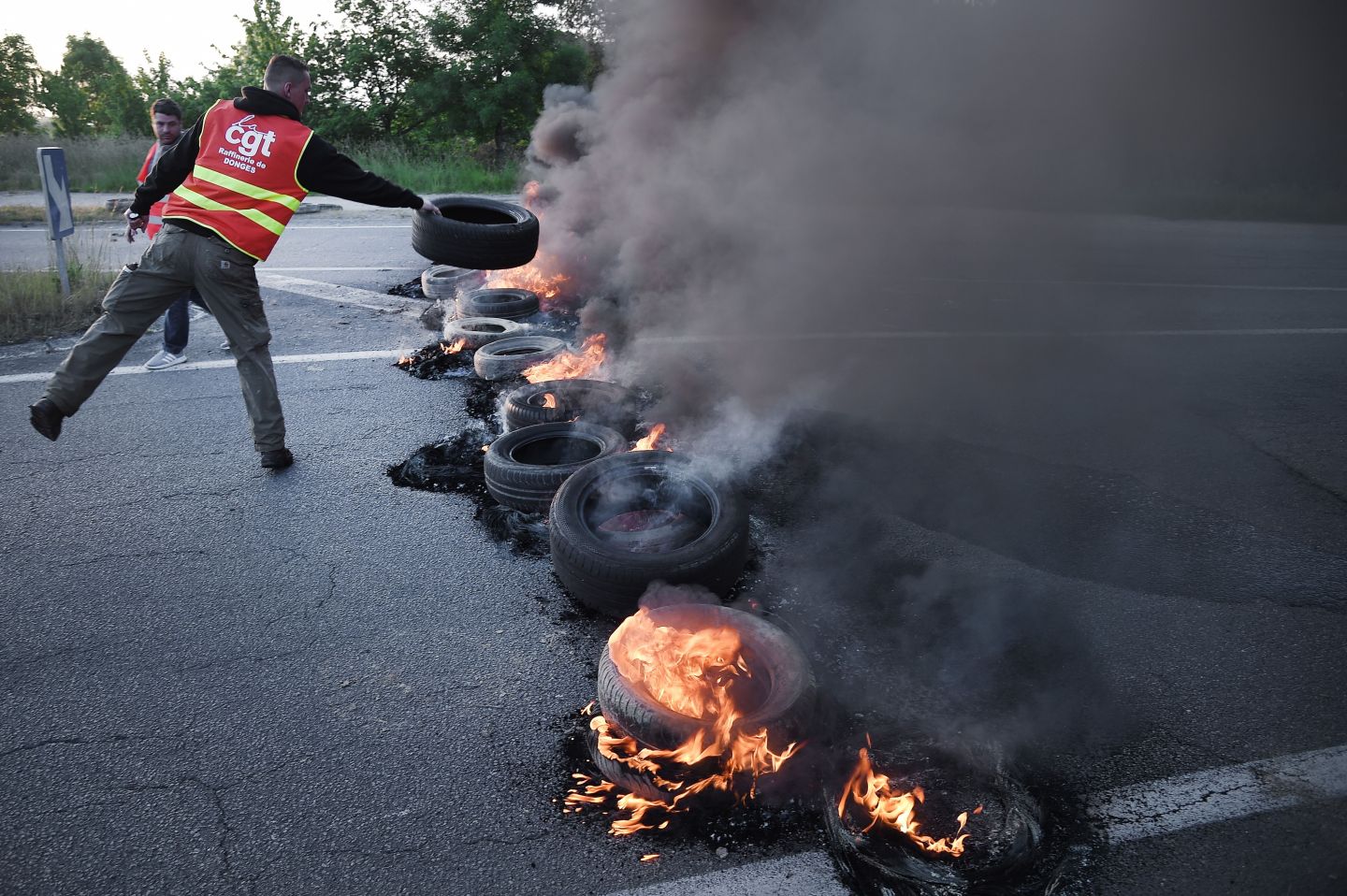 At first sight, France looks like it’s up to its old tricks.

Angry trade unionists are disrupting public transport, burning tires and manning picket lines over a government plan to reform labor laws. Yet their ability to shut down swathes of the economy and force ministers to back down is not what it used to be, and reforms are slowly changing the French landscape.

Long gone are the days of 1995 when a conservative government had to requisition tourist boats on the Seine river to get commuters to work because Paris metro workers had shut down the underground railway during weeks of strikes.

French strikes have become a shadow of their former selves: less frequent, less disruptive and less successful, leaving some unions groping for relevance.

That has raised the stakes in the confrontation between the militant CGT union and President Francois Hollande’s Socialist government over a reform meant to ease hiring and firing. The government has watered down its original bill, but each side is now so weak that it dare not give in and lose face.

Despite drifting away from its communist roots, the CGT’s place as traditionally France’s most powerful union is increasingly under threat from the more pragmatic, reform-minded CFDT union, which now has more members and has backed the amended reform.

Less than a year from crucial elections to determine union representation within companies in March 2017, these strikes and protests are CGT head Philippe Martinez’s best and perhaps last chance to prove the union is still a force to be reckoned with.

“People have changed, they’ve gotten used to being more individualistic. It’s become ingrained in their minds, including the young,” said Denise Desmaison, a human resources worker at state-controlled utility EDF, as she marched in an anti-reform protest in Paris.

“There’s a price for going on strike,” added the 59-year-old, a veteran of the 1995 national walkout that forced a conservative government to drop pension reforms, speaking about strikers’ docked salaries.

French workers are more reluctant nowadays to walk off the job. Companies in France lost 79 days to strikes per 1,000 workers in 2013, the latest labor ministry data shows.

That is less than half the level in 2005, though more than double the EU average. By comparison, companies in Britain, a western European country with a similar sized economy, lost just seven days per 1,000 workers in 2013, official figures show.

The decline has accelerated since conservative President Nicolas Sarkozy passed a law in 2007 banning wildcat walkouts and forcing public transport unions to guarantee a minimum service during strikes.

Yet unions continue to wield considerable power to negotiate wages and employment terms for all workers under the country’s labor laws, even though France is one of the least unionized of developed nations.

One Labour Ministry estimate put union membership at as low as 7.7 percent, third lowest among the 34 advanced countries in the Organisation for Economic Cooperation and Development. Another official survey puts public sector unionization at more than double that of the private sector.

Unions are also struggling to recruit fresh blood. Membership is highest among 50 to 59-year-olds.

But the French tradition of spectacular, sometimes violent protest action, such as tearing the shirt of an Air France human resources executive during a dispute last October, creates an image that deters some foreign companies from investing.

“France loves to project this image of itself as being in the throes of some permanent drama,” said Jean-Marie Le Guen, junior minister for parliament relations. “But that’s not the reality. France is not at a standstill.”

The proposed labor reform could weaken unions’ influence further by allowing all employees in a company to vote on key work issues rather than leaving them to negotiation between unions and employers. That has put the CGT on the defensive while the CFDT has embraced the idea of giving non-unionized workers more say on their working conditions.

“The union movement is at a crossroads,” CFDT chief Laurent Berger said, accusing the CGT of “treating workers like children.”

Since the monster 1995 national strikes, which forced newly elected President Jacques Chirac to yield, major standoffs with successive governments have been scarce and their results mixed.

Another conservative government ditched plans for a lower-paid youth employment contract following mass protests in 2006, but Sarkozy stood firm on plans to raise the retirement age to 62 in 2010 despite weeks of strikes and demos. He was not re-elected.

Public opinion is now split, but 57 percent expect the labor reform to be enacted with modifications while 26 percent expect it to pass as is, according to an IFOP poll last week.

The longer term outlook for reform looks permissive with polls showing conservative Alain Juppe – prime minister at the time of the 1995 strikes – is France’s most popular politician.

Juppe, a contender for next year’s presidential election, advocates much more drastic steps such as scrapping the 35-hour work week, abolishing the wealth tax and shifting the tax burden from income towards consumption.

Whoever wins the presidency will inherit an improving economy, which grew faster than Britain or the United States in the first quarter. Unemployment is finally falling, though still over 10 percent, and the budget deficit is narrowing.

“It’s a complete French paradox,” Bruno Cavalier, chief economist at French investment bank Oddo said. “On the one hand, the cyclical recovery is picking up enough to show the first tangible signs of declining unemployment. On the other, a minority of activists tries to block the economy.”

Bond investors have remained unfazed by the protests, with benchmark government bond yields near all-time lows partly due to the ECB’s asset-purchase program.

Willem Verhagen, an economist at ING Investment Management, said the union demands partly reflected a broader backlash against globalization by workers across the Western world.

“It’s not as simple as saying ‘Hey those French workers are on strike again’,” he added.

Unlike some of his predecessors, Martinez’s combative stance has not made him popular. Two-thirds of voters have a negative view of him, an Odoxa poll found.

The CGT leader has struggled to stamp his authority on the union he has led since February 2015. Union insiders say he was forced into a hard line by grassroots radicals.

The longer the strikes last without wringing concessions, the more they risk losing public sympathy, and voters may show the CGT the red card when France hosts the Euro 2016 soccer tournament from June 10.