The World is Falling Into a Low-Growth Trap – OECD 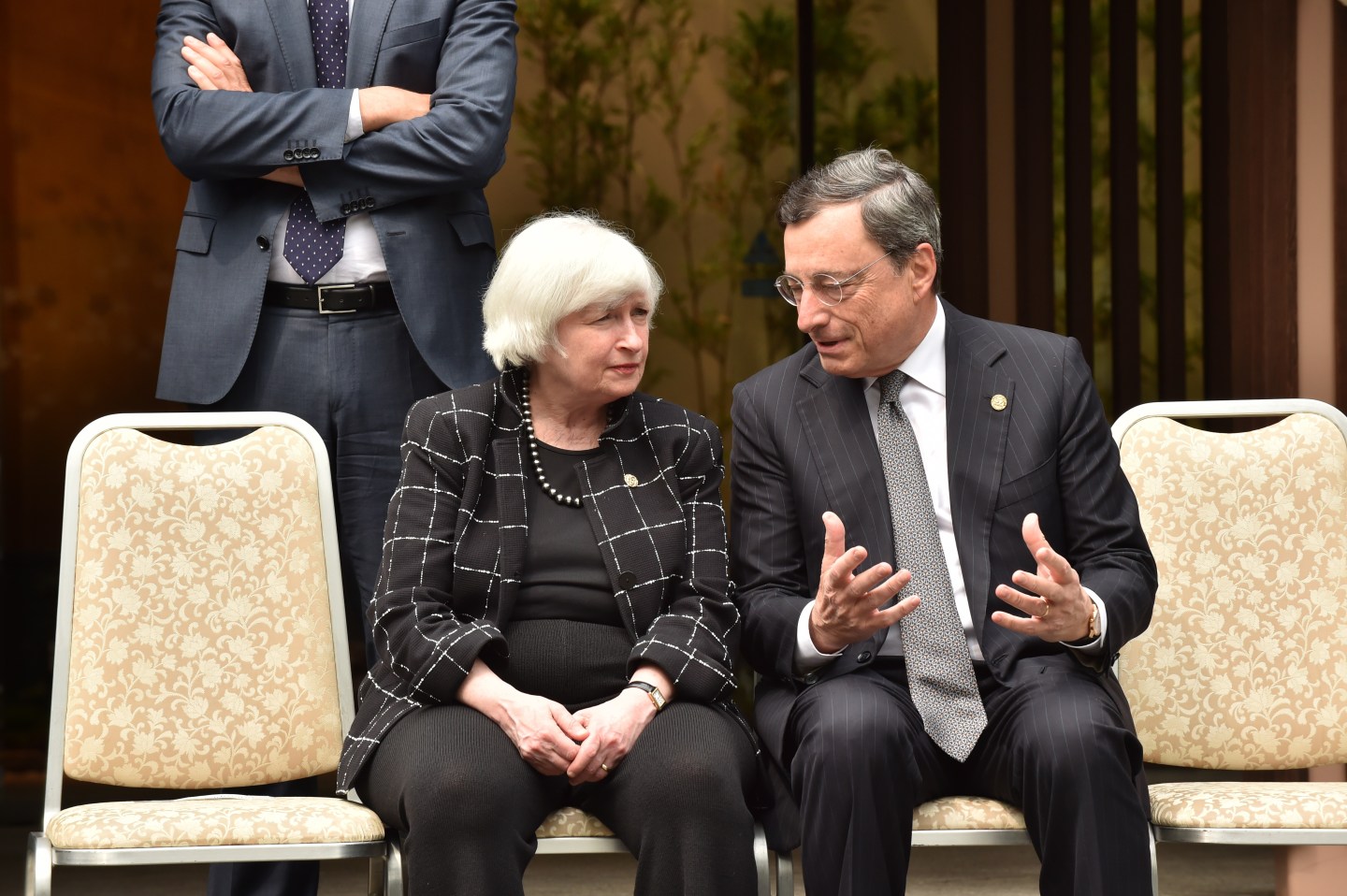 European Central Bank President Mario Draghi (R) talks with Chair of the Board of Governors of the Federal Reserve System Janet L. Yellen (L) during a photo session of the G7 Finance Ministers and Central Bank Governors' Meeting in the hot spring town in Sendai on May 20, 2016. Finance ministers and central bankers from the G7 kick off meetings in Japan on May 20 as they look to breathe life into the wheezing global economy. / AFP / KAZUHIRO NOGI (Photo credit should read KAZUHIRO NOGI/AFP/Getty Images)
Kazuhiro Nogi — AFP/Getty Images

Ensnared in a “low-growth trap”, the world economy will meander along at its slowest pace since the financial crisis for a second year in a row in 2016, the OECD forecast on Wednesday, urging governments to boost spending.

With businesses wary of investing and consumers cautious about spending, the global economy will grow only 3.0 percent this year, the Paris-based Organization for Economic Cooperation and Development estimated.

That would be no better than last year (already the worst since 2009), although growth would pick up modestly to 3.3 percent next year, the OECD forecast in its biannual Economic Outlook.

Growth at those levels deprives youths of job opportunities and means old people will not get the healthcare and pension benefits they expect, OECD Chief Economist Catherine Mann told Reuters.

“We are breaking promises to young people and old people. Therefore policymakers have to act to break us out of the low growth trap,” Mann said in an interview.

With OECD countries growing on average at half their estimated potential, it would take 70 years to double living standards, twice the rate of two decades ago.

Mann warned against counting on central banks alone to lead the return to higher growth rates, saying there are now more risks than benefits in their exceptionally loose monetary policies.

Therefore, governments should not hesitate to plough money into growth-boosting initiatives like education and infrastructure, financing higher spending thanks to rock-bottom interest rates in many countries.

“The low interest rate environment created by the central banks opens up fiscal space to governments and we are saying that you should use it,” Mann said.

Though the OECD did not lower its global growth forecast from the last time it updated its estimates in February, it said the U.S. outlook had dimmed.

It cut U.S. growth for this year to 1.8 percent from its previous forecast of 2.0 percent, with weak foreign demand and a dearth of investment in the oil and mining sector being mainly to blame.

The OECD reiterated a warning that Britain would suffer a sharp slowdown in growth if voters opted in a referendum this month to leave the European Union.

In light of the political uncertainty surrounding the vote, OECD cut its forecast for 2016 British growth to 1.7 percent from 2.1 percent previously, assuming voters opted to stay in the E.U. But a vote to leave could shear half a percentage point off British growth annually in the following years, the OECD estimated.

‘Brexit’ aside, the outlook for the euro area had improved, with the OECD raising its growth estimate to 1.6 percent this year from 1.4 percent in February on an improved outlook for the French and German economies. Both turned in better-than-expected figures for the first quarter, although analysts warn that the rest of the year is likely to be tougher.