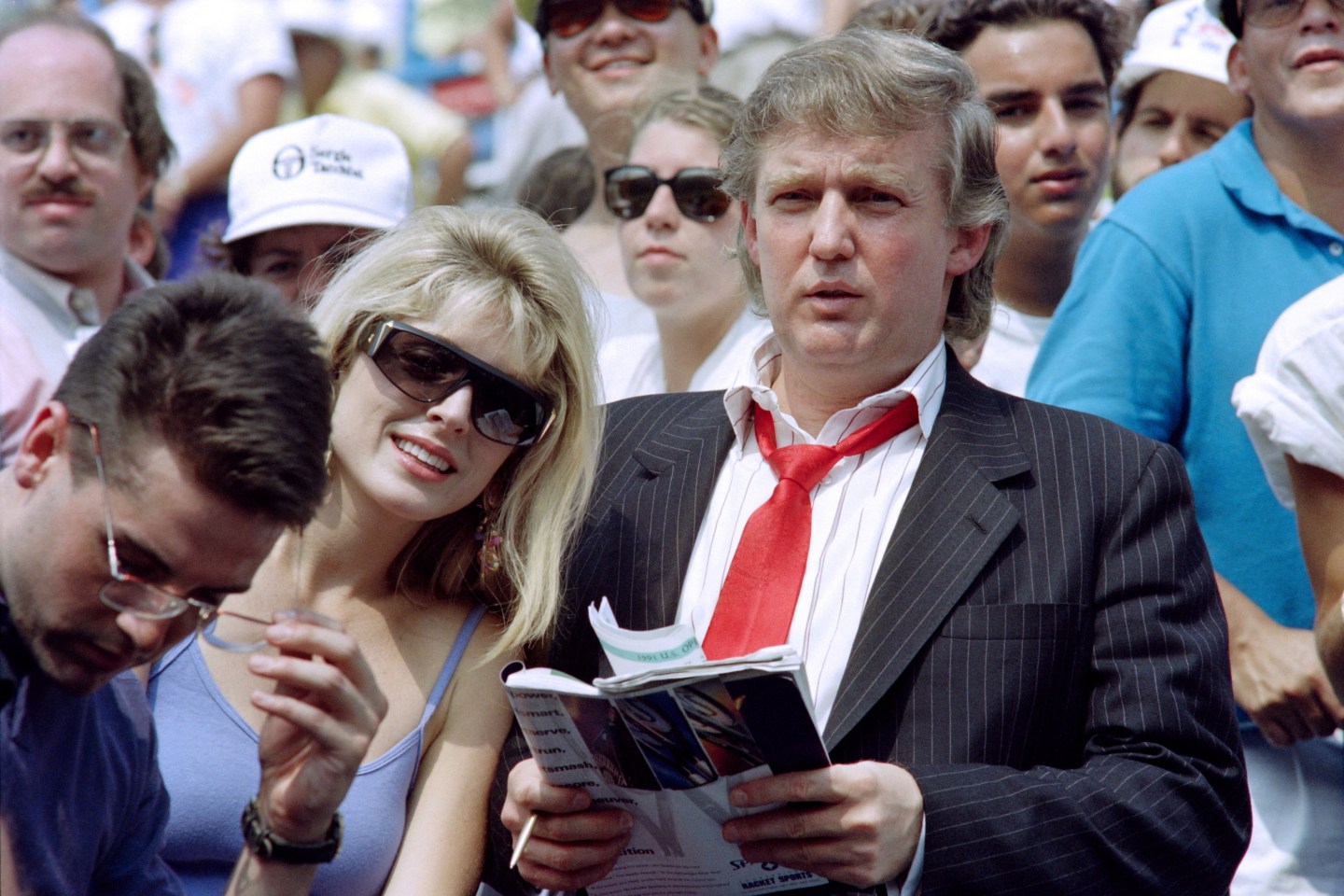 Editor’s note: On Friday, May 13th, the Washington Post published a story based on an odd episode between Donald Trump and a reporter from People, in which the reporter claims Trump call her under a different name, claiming to be a PR person. Trump has denied the claim. The former People reporter Sue Carswell has since said she believes Trump leaked the audio recording of the interview himself. Here is the article, originally published on July 8, 1991, and titled “TRUMP SAYS GOODBYE MARLA, HELLO CARLA And a mysterious PR man who sounds just like Donald calls to spread the story,” on which the Washington Post story was based.

And there are stories that are simply bizarre. Last week, Donald Trump, after years of edging ever closer, seems finally to have landed squarely in the last category. On June 26, the tabloid New York Post ran a front-page headline announcing that Trump, 45, had dumped his longtime sweetheart, Marla Maples, 27, and taken up with an Italian model named Carla. A curious People reporter called Trump’s office to ask if the story were true.

Five minutes later, a man identifying himself as John Miller called back, said he was handling publicity for Trump and confirmed everything, in detail. Yes, said Miller, it was over with Marla. ”It doesn’t matter to [Donald] if Marla talks; he truly doesn’t care.”

As for that diamond ring Trump bought Marla several weeks ago, ”It was never an engagement ring,” said Miller, who went on to brag about the army of women he said were rabidly chasing The Donald: Madonna was one, he said, Kim Basinger another. ”Important, beautiful women call him all the time,” said Miller.

It was a fascinating interview, made all the more fascinating when the reporter realized that the man she was talking to seemed to be . . . no, it couldn’t be . . . yep, it apparently was: Donald Trump, posing as a fictitious PR man.

Is it possible to be sure? Probably not. But the reporter had taped the phone call and played the tape for people who know Trump. Said columnist Cindy Adams: ”There is no John Miller. That’s Donald.” Said a former close associate who also ID’d the voice: ”Is he whacked out, or what?”

Astoundingly, and sadly, the most telling response came from Marla Maples herself. After she listened to a fragment and identified Trump, she was flabbergasted. It was the first time she had heard him publicly declare the relationship over. ”I’m shocked and devastated,” she said. ”I feel betrayed at the deepest level. My friends and family have been praying for me for a long time, and this may be the answer to their prayers.” Still, she added, ”No matter what, I came into this for love, and I hope he finds happiness.”

Maples’s shock is understandable, given all that the loquacious ”John Miller” had to say. Some samples: ”The biggest misconception was that Donald left [ex-wife Ivana] for Marla. He didn’t. He leaves for himself.”

On marriage: ”When he makes the decision, then that will be a very lucky woman.”

On his new girlfriend, Carla: ”Her name is Carla Bruni Fredesh. I don’t know how to spell the last name. She dropped [a big rock star, who is married] for Donald. And that’s where it stands.”

On Kim Basinger: ”She wanted to come up and discuss a real-estate transaction. And you know, she wanted to go out with him. That was the reason she came up. Competitively, it’s tough. It was for Marla and it will be for Carla.”

On the controversial ”engagement” ring: ”This was [about] giving Tiffany some business and getting Ivana, uh, getting Marla something that would be nice.” Apprised of all this, Maples appeared distraught and genuinely confused. ”Two weeks ago he was asking her when she wanted to get married,” says a close friend of Marla’s. ”She didn’t know they were ending like this.”

When the reporter called Trump’s office for an explanation, she was told that John Miller had gone home and that Trump would have no comment.

This story was originally published on People.com.