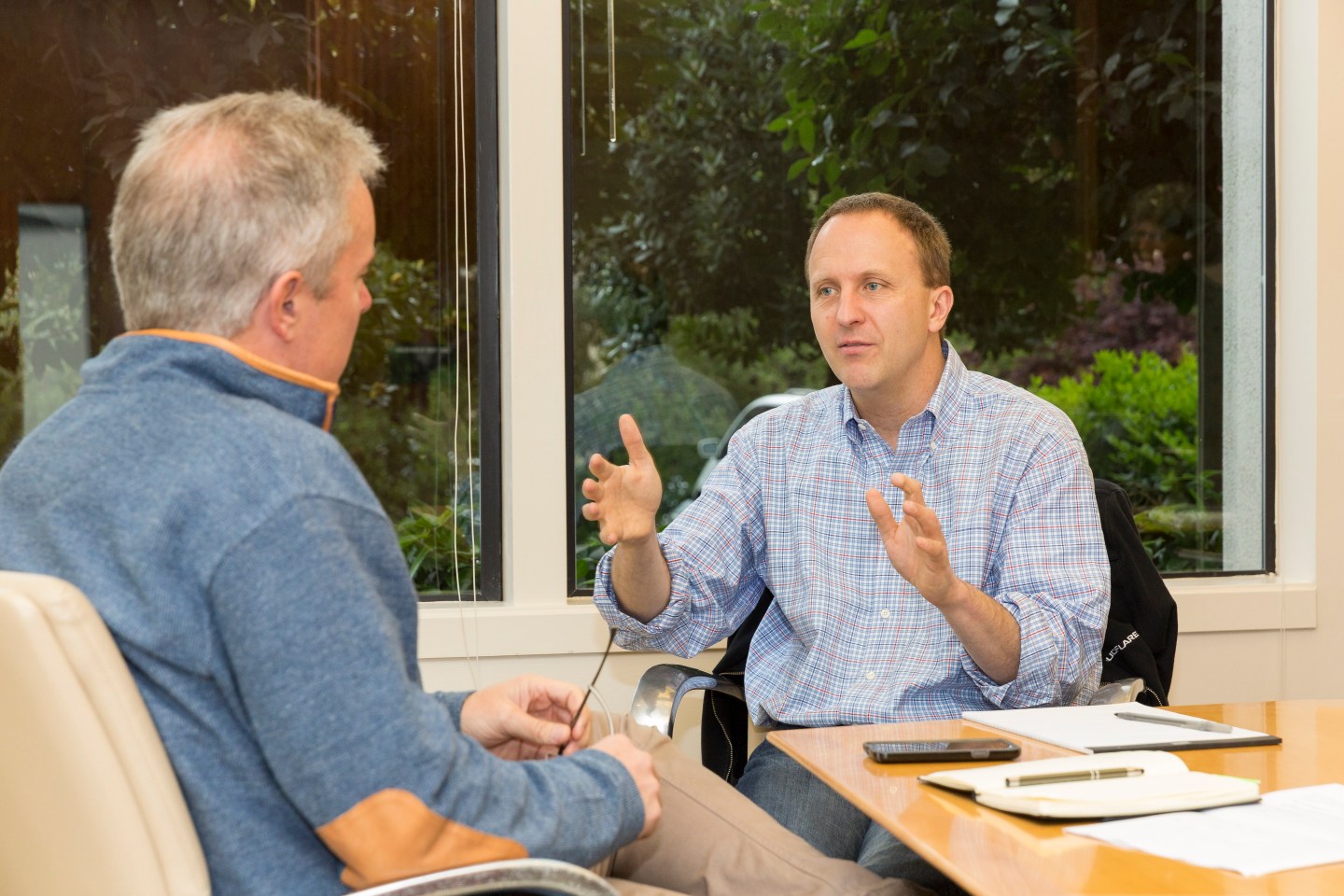 This is the first part of VC to VC, a monthly series that features conversations between veteran venture capitalist Phil Wickham and other leaders in the investment world. Wickham is also CEO of Kauffman Fellows.

Bryan Roberts has built a career on picking winners in the health–care industry. The seasoned venture capitalist and partner at Venrock has invested in startups across almost all health–care categories. In the past few years alone, he’s lead several billion-dollar exits.

On a more personal note, I’ve known Bryan for 20 years. He’s the rare individual who combines deep core-subject expertise with a supercharged imagination, an almost radical sense of self-confidence, and a loyal dedication to his entrepreneurs and their ideas.

I spoke with Roberts about the trends VCs should be watching in health care. The interview has been edited for clarity and length.

How is the health–care industry evolving?

Over the last five years two or three stones have been thrown down a gravel slope, and they’re just beginning to carry momentum and create big opportunities. Things like changes in doctor’s payment methods, which get them out of a volume game and into an outcomes game.

Other pebbles include the wiring of doctor’s medical offices, the advent of smartphones and a whole new generation of participants in the health-care system that grew up using technology—unlike my dad who was like “This is it—paper and pen.”

I think there will be a metaphorical avalanche from those, and it’ll happen over the next decade.

Related: This Is What Makes a Great Boss

Can you elaborate on the changes in financial incentives?

The people paying for health care are getting more involved in trying to create more of a marketplace dynamic, which puts more financial responsibility on consumers. And you’ve got people no longer just abdicating intellectual responsibility [for their health care] to insurance companies.

A decade ago, when you got your first job, you worked at a big company and toward the end of the year, they picked four or five health plans for you to choose between. And there were various cost plans. Those plans had specific, “out of your paycheck” costs and choices. Period.

But that benefits person didn’t do anything other than tell United Healthcare, or Aetna, or Blue Cross, “Okay, give me those options,” and that’s it. And the company paid for most of it. So no matter where you went, it was a $20 copay.

If you fast forward to today, you have these big companies actually insourcing more of the intellectual responsibilities, which is why you have all these companies now going and pitching employers. Employers want to understand where they’re spending money, where they can spend less while getting better care, and how they can motivate people to do this and not that.

And they’re outsourcing more the of the financial responsibility to you. You pay 30 percent of the bill to make you care about getting your MRI done not at the hospital, but at the imaging center down the street where it’s one-third the cost.

It reminds me of back in the day, when you had multiple, big telecom and software providers that all wanted to control consumers’ TV boxes. Now, you have multiple, big health insurers competing for control over…what, exactly?

Everybody wants to be the platform that controls the information and the patient flow—because that is how the money will flow. And so they’re going to fight over this.

Related: What the Most Successful Entrepreneurs Get Right About Angel Investors

Who do you think wins?

That’s the huge question. The benefits consultants just consult, so they could win, but they don’t. The insurance companies have no brand equity—no one wants to be even more in bed with their insurance company. Then you have various other people that sell into HR that are trying to integrate health care into their various stuff. I don’t know. That’s going to be a fun one. We’ll see.

What are the biggest challenges in health care that you’d like to see entrepreneurs address?

There’s a simple one: How do we get health care out of a short-term time horizon mentality? Because here’s the hitch: The people who pay for the vast majority of health care don’t have any economic incentive to care about anything that takes more than three or four years to pan out. It’s why preventive care is what it is.

So the system today is more about ‘sickness care’ than health care?

That’s right. Insurance companies keep customers for, on average, about 18 months, maybe 24 tops. Which means there is preventive care, like for pre-diabetics—really intensively helping that person not get diabetes—but [the insurance companies] are like, “Why the heck would I do that?” since benefits will accrue to the next guy, to a competitor.

That’s the time horizon on ROI for anyone in the health-care system. It’s short. So how you get out of that box—it’s the only thing that will get us from this kind of sick, disease-reactive approach, to something proactive.

What are some other big questions you’d like to see answered?

One is what really gets individuals to engage in health care. What gets each of us to change our workflow, change our behavior? I would argue it’s repetitiveness. I’ll give you an example. Every time a new iOS comes out, I frigging hate it. It’s different, it’s terrible. But like four hours later, it’s the new normal, because I had to push through it or I was screwed.

In health care, the periodicity in which you use the health-care system—and you’re not in a discovery mode when you’re using it, because you’re scared—hampers that adoption of a new normal.

The other question is, in a world where you’re not fee-for-service anymore but you have this value-based care…Who is the entity at risk? Health care is delivered by teams. You can’t have 12 people at risk. One entity has to be at risk for the outcome, and everyone else is still going to be a wage laborer. Who ends up being the business owner in health care that goes at risk, versus the subcontractors who get paid an hourly wage? I think that’s a fascinating question.

What is the most amazing change you predict will happen in the next 10 years?

I think there will be half as many hospital beds in the U.S. in 10 to 20 years as there are today. Because people will be healthier and because we’re so overbuilt. We’re going to change the economics of the system. Today hospitals are like airlines — they just want to put bodies in seats. The whole system is geared toward that. If you change that around, then you’ve reversed the pressure on the whole system.