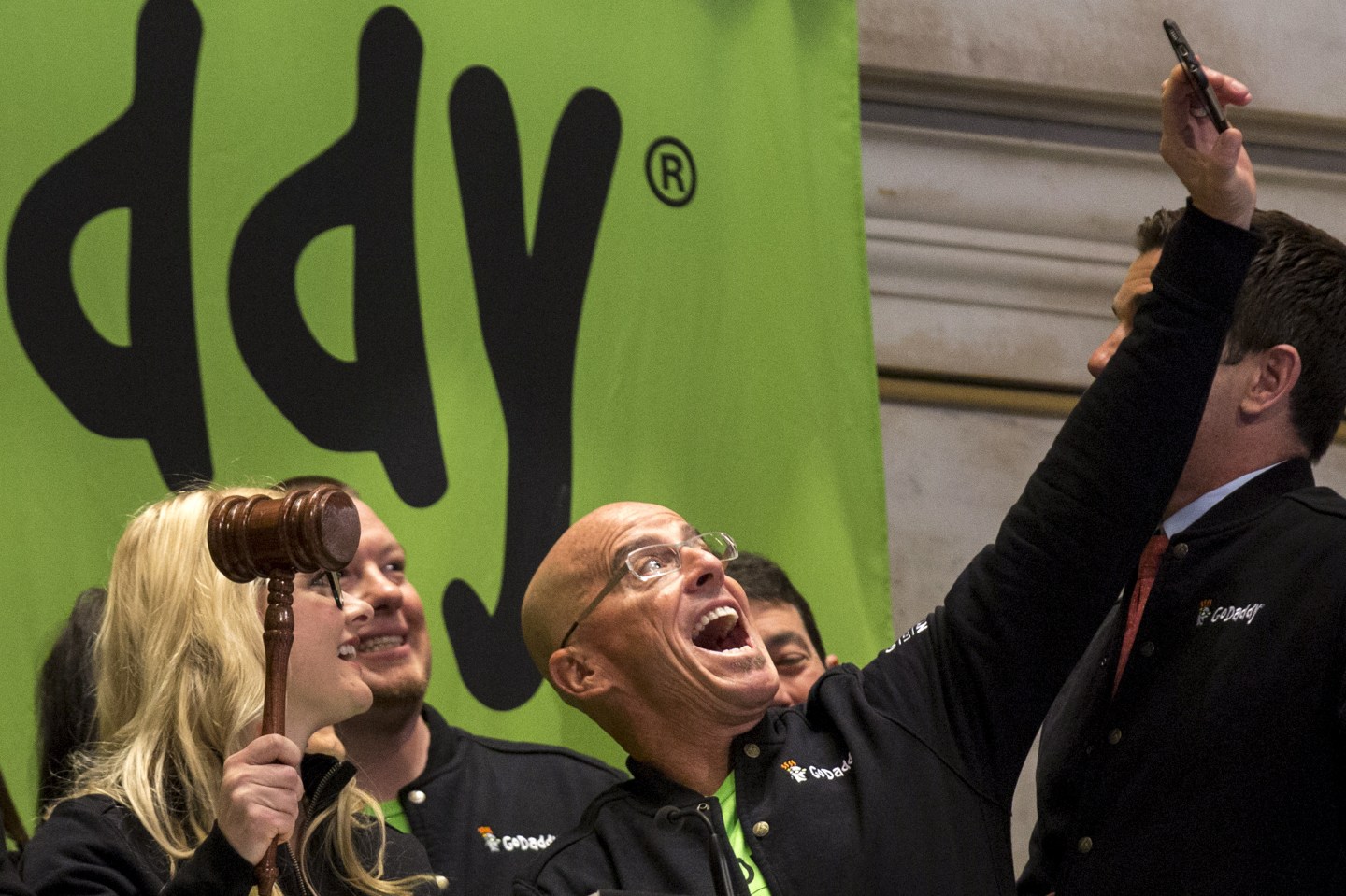 GoDaddy Chief Executive Officer Blake Irving takes a "selfie" photo with a customer before they ring the opening bell to celebrate his web hosting company GoDaddy's IPO on the floor of the New York Stock Exchange April 1, 2015. GoDaddy Inc's shares rose as much as 34 percent in their debut on Wednesday, valuing the Web hosting and domain registration company at up to $5.48 billion, including debt. REUTERS/Brendan McDermid - RTR4VRXS
Photograph by Brendan McDermid — Reuters

When GoDaddy, the company best known for selling Internet domain names and a dark period of racy ads, debuted cloud computing services in March, some people scratched their heads.

It was a big departure, they thought, to rent computing power and software tools to small and medium-sized business. But the company says the service is a natural extension of the products it’s been selling for some time, especially to developers who build websites for small businesses.

GoDaddy’s Pro program provides professional developers with tools to help them manage work they do for their own clients, which are often small businesses. Irving describes cloud service as an extension of those tools because these smaller developers can now not only build websites for their customers, but also create custom software or applications for them.

That focus on smaller developers and small businesses is also how GoDaddy thinks of its cloud service in comparison to the market’s top dogs like Amazon’s (AMZN) AWS, Google’s (GOOGL) Cloud Platform, and Microsoft’s (MSFT) Azure. Unlike those tech giants, GoDaddy isn’t chasing “big companies with big workloads,” says Irving. At them same time, he sees smaller customers as an underserved category that his company is happy to help.

GoDaddy introduced its cloud computing service in March, making it available in 53 countries and in 26 languages. The service is built on OpenStack, a set of open source tools for managing servers and networking gear, and lets customers quickly install a variety of business-related apps, such as WordPress and Magento, thanks to a partnership with Bitnami, a library of open source server app deployment tools.

GoDaddy, the Power Behind a Zillion Websites, Launches Amazon-Style Cloud

Irving doesn’t view GoDaddy’s cloud computing service as something that will become a money-printing machine, as AWS is for Amazon. But it is part of a side of GoDaddy’s business that will eventually be its main revenue generator: hosting.

GoDaddy’s first quarter revenue from its web hosting services, which it reported on Wednesday, grew 14.4% to $160.4 million. It was not far behind the $218.9 million that the company’s web domain services brought in during the same quarter, representing a 9.9% gain year over year.

“Over time, there’s no question that domains are going to become a smaller part of our revenue mix,” said Irving.

While GoDaddy already provides a wide range of products for small businesses, there are still areas his company hasn’t waded into, he added. But he declined to share specifics about those upcoming categories.

Overall for the quarter, GoDaddy lost $18.3 million on revenue of $433.7 million for the first quarter, up 15.3% year over year. The results slightly beat analyst expectations