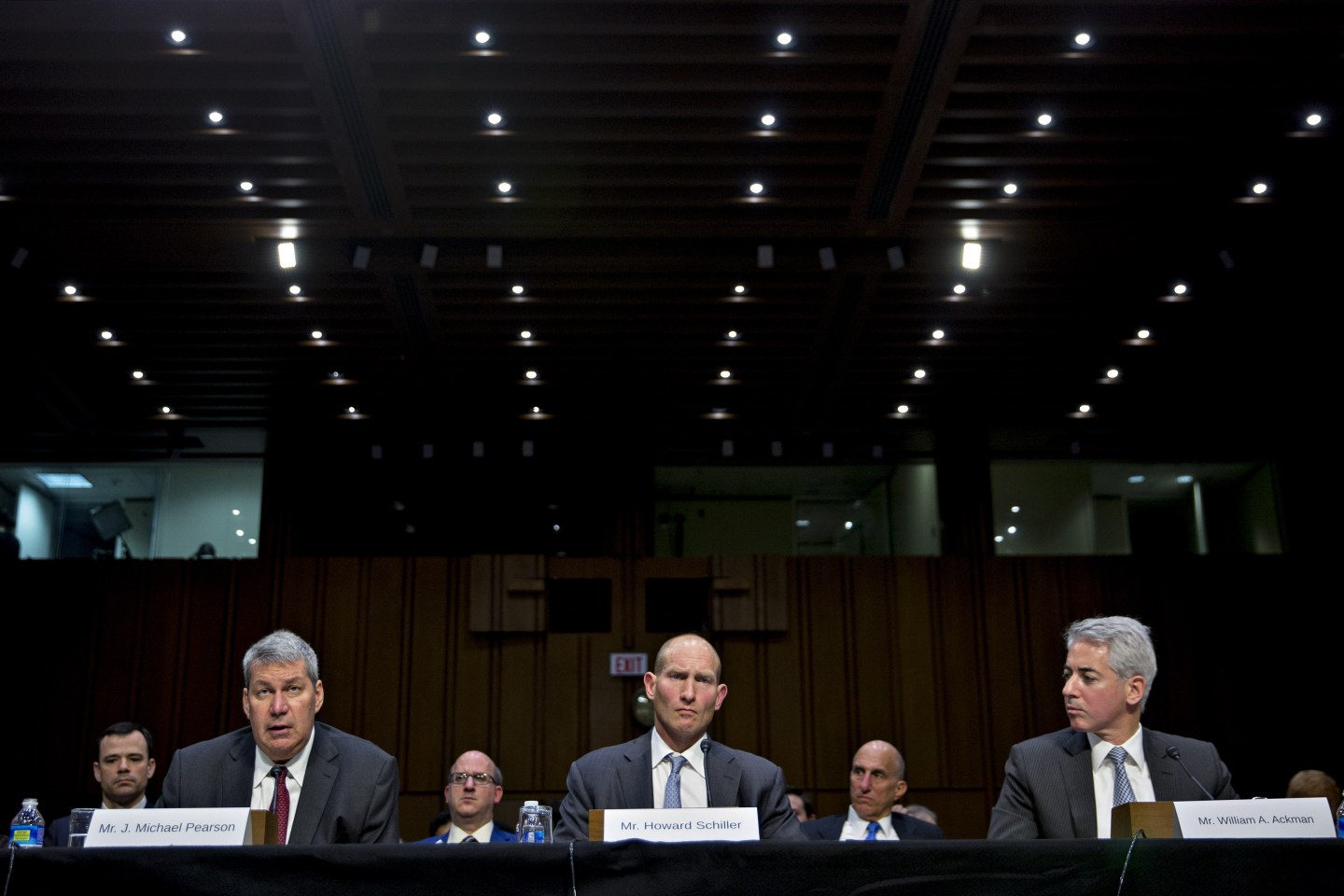 Michael "Mike" Pearson, chairman and chief executive officer of Valeant Pharmaceuticals International Inc., left, speaks as Howard Schiller, former interim chief executive officer and former chief financial officer of Valeant Pharmaceuticals, center, and William "Bill" Ackman, founder and chief executive officer of Pershing Square Capital Management LP, listen during a Senate Special Committee on Aging hearing on Valeant Pharmaceuticals in Washington, D.C., U.S., on Wednesday, April 27, 2016. After months of turmoil, which began with a controversy over the price increases of two cardiac drugs by 525 percent and 212 percent, Valeant has lost more than 85 percent of its stock market value, failed to file its annual report, and said it is being investigated by the U.S. Securities and Exchange Commission. Photographer: Andrew Harrer/Bloomberg via Getty Images
Andrew Harrer — Bloomberg via Getty Images

As promised, Laval, Quebec-based Valeant Pharmaceuticals (VRX) released its much delayed 2015 annual report Friday—likely averting the danger of a debt default. The company is still facing federal investigations regarding its business and drug pricing practices.

The troubled pharmaceutical giant pushed back reporting on its annual earnings after it was accused of fraudulent accounting prices in relation to specialty pharmaceutical company, Philidor Rx Services, and the board launched an internal investigation. But it faced a deadline with creditors who were threatening to put the company into default on its $32 billion in bonds if it didn’t file its delayed annual report by the end of April.

“The default under our senior note indentures arising from the failure to timely file the Form 10-K was cured in all respects by the filing of this Form 10-K,” the company stated in a regulatory filing.

The restatement reduced fiscal year 2014 revenue by $58 million. The company also shifted its first quarter 2015 earnings downward by $21 million. The overstatements came because the company essentially booked the sales of some drugs twice. Valeant booked $58 billion worth in sales of drugs to Philidor in 2015, and booked the sales of those same drugs again in 2014, when Philidor sold those drugs to consumers.

Although the company said it made no restatements beyond what had already been mentioned, the company stated more clearly that the “improper conduct” of its former Chief Financial Officer Howard Schiller and former Corporate Comptroller had led to the misstate results.

Valeant also acknowledged that it may have misstated results in part because top executives pressured the company to meet sales expectations.

Several critics including John Hempton and the Southern Investigative Reporting Foundation have also accused Valeant of a deceptive accounting practice known as channel stuffing—when companies inflate sales figures artificially by pulling forward future sales. And Valeant confirmed that it had taken steps in that direction. Channel stuffing, which is somewhat common in the pharmaceutical industry, often involves companies incentivizing distributors to buy more than they can likely sell.

(For more on the fall of Valeant read: Bill Ackman and Michael Pearson: The Inside Story)

According to Valeant’s annual report, the company encouraged distributors in Russia and Poland to buy “inventories above target levels” by offer discounts or an extended amount of time to make payments.

“The company has determined that the tone at the top of the organization, with its performance-based environment, in which challenging targets were set and achieving those targets was a key performance expectation, may have been a contributing factor,” the 10-K noted. Valeant has used the exact same phrasing before. Although Valeant also added that the elevated inventories in its Eastern European business did not “result in a material misstatement of the company’s financial statements.”

The company also reported that in addition to ongoing investigations by the Securities and Exchange Commission and others, Valeant’s business is also being investigated by the State of North Carolina Department of Justice. On Wednesday, hedge fund manager Bill Ackman, who recently joined Valeant’s board, pledged to end the company’s practice of aggressively hiking drug prices.

Valeant recently heralded in a new CEO to lead the company—poaching Joseph Papa from another troubled pharmaceutical giant, Perrigo (PRGO), earlier this week. Papa is expect to become CEO by early May.