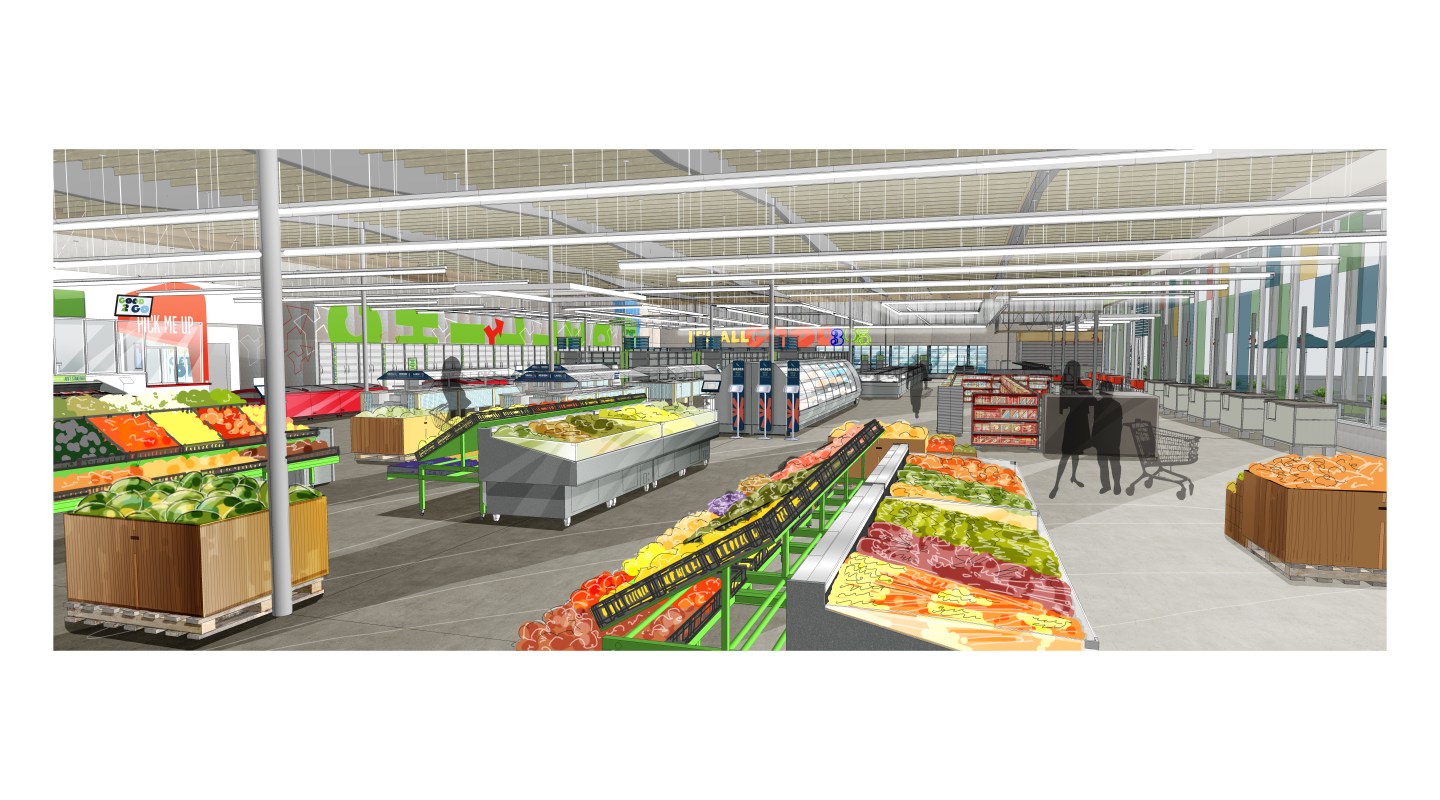 Whole Foods Market (WFM) is starting to give customers a clearer picture of what to expect when it opens the first location of its lower-priced (read: millennial friendly) chain next month in the Silver Lake neighborhood of Los Angeles.

The company has released renderings of its first “365” market, with the store’s layout ranking as one of the top differences between the new concept and the original Whole Foods stores.

Whole Foods today also announced that its second 365 location, in Lake Oswego, Oreg., will open on July 14. The company will open a third location in Bellevue, Wash., this fall with up to 10 locations slated to open next year.

Whole Foods is launching the lower-priced chain in response to heightened competition in the natural and organic food realm, which has cut into the company’s sales growth. “This opens up a new segment of the market,” 365 president Jeff Turnas tells Fortune. “There’s a piece of the business we’re not getting.” The focus on affordability is “geared toward getting new customers,” he adds.

The retailer built its brand on big, beautiful, expensive supermarkets that each have their own distinctive flavor. Stores within the 365 chain will keep the prices of products down through a simpler, more consistent design that requires less labor in the store. The Silver Lake location is 28,000 square feet, vs. an average of 45,000 square feet for a typical Whole Foods.

Turnas tells Fortune that the company was able to cut the fees it pays to architects nearly in half by using a more standardized approach. For example, every store will have one entrance and eight end caps—the displays at the end of each aisle—and “we know exactly what’s going to be on every end cap in every store,” Turnas explains.

Food will be displayed on low fixtures so customers can see the entire space, and there will be no signs in the center of the store. “We don’t want to hang things to tell you that it’s fall,” Turnas says. “The product mix and what’s on display will speak to that. We’re not interested in creating that sort of ambiance through signage.”

The new stores will eschew certain service elements that are staples in the flagship chain, such as cheese mongers and butchers. The 365 locations will instead package these sorts of items in advance and brand them with its new logo. The company’s private label, the namesake of the new concept, will anchor the chain. The pantry part of the store where these items will sit is where 365 and the legacy stores have the most overlap aesthetically, Turnas says.

Turnas and his team have made prepared foods the heart of the new stores, with four food bars included in each. A recent analyst report from Oppenheimer predicted that 20-30% of 365’s business could come by taking market share from restaurants; the report also forecast that 15-25% could come from legacy Whole Foods stores.

The opening of the 365 chain marks a new kind of model within the supermarket sector. “We haven’t been able to find a grocery store that’s gone from premium to a value format,” Turnas says. “We’ve seen it go the other way.”

Turnas says that he’s looked to fine dining restaurateurs, who have opened up fast casual concepts—like Danny Meyer’s Union Square Hospitality Group, which expanded from high-end restaurants like Gramercy Tavern and the Modern into the Shake Shack chain. “They���re all moving from this amazing experience, which is layered, deep, and rich to simpler, focused, and streamlined but still really great quality.”