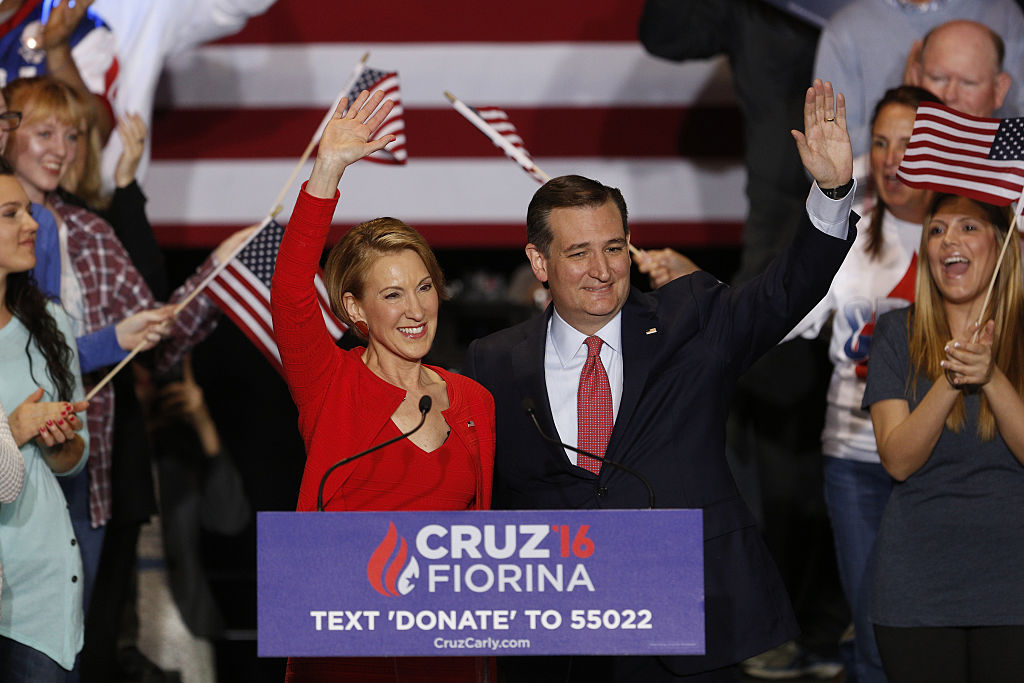 Call it a Hail Carly.

With his presidential hopes badly flagging, Texas Sen. Ted Cruz reached for a miracle Wednesday to shake up the Republican race by naming former Hewlett-Packard CEO Carly Fiorina as his running mate.

Cruz’s stunt comes a day after Donald Trump crushed him in a slate of Northeastern primaries, shutting out both him and Ohio Gov. John Kasich by decisive margins in all five states that voted on Tuesday.

The wins put Trump within grasping distance of clinching the Republican presidential nomination. And they piled pressure on Cruz to mount what could be a last stand in Indiana, set to award all of its 57 delegates to the top vote-getter in its primary on May 3.

The scale of Trump’s victory on Tuesday throws Cruz’s challenge into stark relief. The frontrunner romped across demographic groups, including women, defeating Cruz among them by 44 points in Connecticut, 30 points in Maryland, and 31 points in Pennsylvania, according to CBS exit polls. Those results are even bleaker for Cruz considering Trump’s vulnerabilities among female voters: Seven in 10 women overall have an unfavorable view of the billionaire, per Gallup, and he barely ekes out positive marks from Republican women.

Yet Cruz is hardly in a position to capitalize. Polls show he is broadly unpopular, with a favorability rating underwater by roughly 23 points. And adding a woman to the ticket may have limited upside, considering the one he picked hasn’t fared much better than he has, consistently registering a double-digit disapproval rating from voters. As a candidate, Fiorina spiked briefly in national Republican polls back in late September, topping out in third place before fading out of contention and formally dropping out after a seventh-place finish in New Hampshire. Her moment, however, was fueled by a run of standout debate performances that lifted her, fleetingly, from the undercard event to the main stage. And once there, she scored a highlight-reel blow against Trump by parrying with icy cool an insult he’d hurled about her appearance.

Cruz referred to that exchange on Wednesday in a half-hour speech to an Indianapolis crowd announcing his selection of Fiorina. Bullies, he said, feed off of fear, and “they don’t know what to do when a strong, powerful woman stands up and says, ‘I am not afraid.’” Perhaps in a nod to the fact that as a team they’re more fierce than friendly, Fiorina, in her speech, doubled-down on their shared divisiveness. “I am reassured and I am proud of some of the enemies Ted Cruz has made. It means he’s going to fight,” she said.

Despite his Wednesday announcement, Cruz’s opportunities for doing so on the trail are swiftly dwindling.