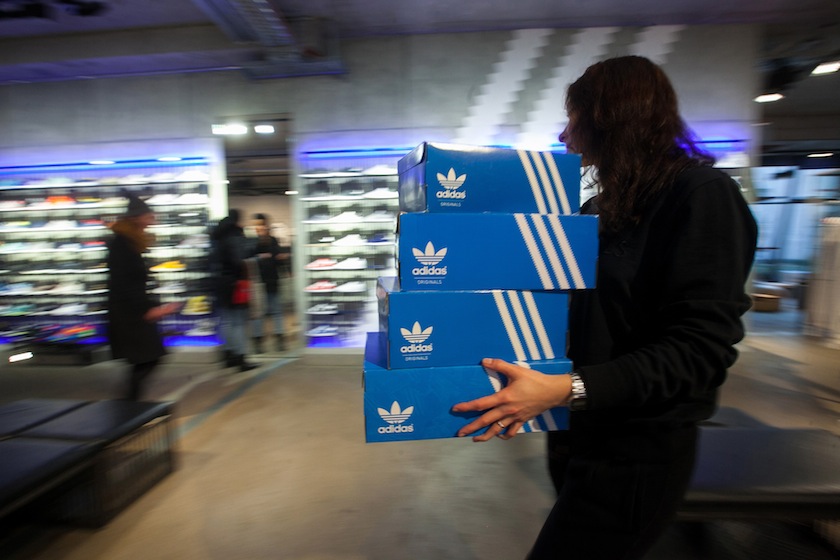 An employee carries shoe boxes inside an Adidas AG originals store in Berlin, Germany, on Wednesday, March 4, 2015. Adidas predicted profit growth for this year that matched analysts' predictions for the struggling German sportswear maker as it pours money into catching up to larger rival Nike Inc. in America. Photographer: Krisztian Bocsi/Bloomberg
Photograph by Krisztian Bocsi–Getty Images

Germany’s Adidas gained ground on larger U.S. rival Nike at the start of 2016, reporting a jump in quarterly sales and profits and raising its outlook for the year, sending its shares to an all-time high.

Adidas (ADDYY) is benefiting from collaborations with celebrities such as Kanye West and Pharrell Williams and has scored major fashion hits with retro Superstar and Stan Smith sneakers.

The company based in southern Germany had already said it had high hopes for 2016 thanks to a busy sporting calendar including the European soccer championship and the Rio Olympics.

“For the group to have performed so strongly, it necessarily means that brand Adidas is back in vogue across the board, not just football in Europe,” said Equinet analyst Mark Josefson, who rates the stock “buy.”

Adidas, which had raised its guidance in February, said it now expected currency-adjusted sales to grow by about 15% in 2016, compared with a previous forecast for a rise of 10 to 12%.

It sees net profit from continuing operations rising by 15 to 18%, up from previous guidance 10 to 12%.

Nike (NKE), by contrast, last month said it expected revenue to grow in the high single digits for the year ending May 2017, less than analysts were expecting, after a strong dollar hurt sales from some of its overseas markets.

Adidas shares were up 7% at 0915 GMT to a new all-time high, rising by more than a quarter so far this year.

Nike shares are down almost 5% this year to lose a long-held premium to Adidas, which is now trading at 25 times forward earnings versus 24 times for Nike.

Adidas has hiked marketing spending, particularly in North America, after losing ground to the world’s biggest sportswear maker, sparking a series of profit warnings in 2013 and 2014 and putting pressure on long-serving Chief Executive Herbert Hainer.

Investors expect that Henkel’s Kasper Rorsted will put more of a focus on improving profitability when he takes over from Hainer in October, in the same way he did at the consumer goods company.

Adidas, which reports full quarterly results on May 4, did not give details or reasons for the strong performance, beyond saying it is seeing “strong brand momentum.”

While Nike still dominates its home territory, Adidas is making inroads, with sneaker sales up by more than half in March, market data firm NPD says, driven by casual, classics and running to lift its market share to 7% from 4.8%.

But it is not just a two-horse race. Under Armour last week reported that its quarterly sales jumped 30%, while Germany’s Puma, which reports results on Friday, is also making a comeback.

“This is a strong signal to investors for the mid-term recovery,” said Equinet’s Josefson.