Here’s Why Investors Are Skittish About the Marriott/Starwood Mashup 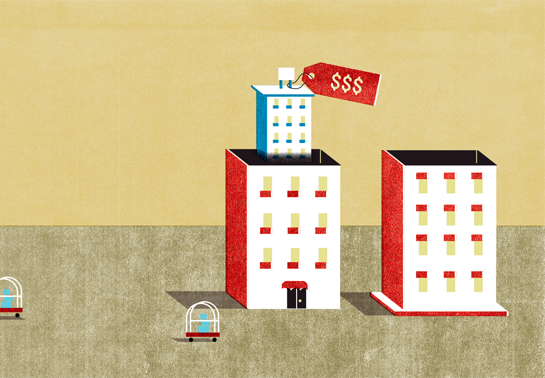 It would seem the news that ­hotel chain Starwood (HOT) is going to be bought by rival Marriott International (MAR) instead of by a little-known Chinese company with uncertain funding would be welcomed by investors. It hasn’t been. Shares of Starwood have fallen 5% since insurance company Anbang pulled out of a bidding war.

Marriott’s shares have fallen as well, by 7%, raising questions of whether investors think Marriott can pull off the deal—which would be the largest hotel cohabitation ever.

The market’s hesitation about the merger seems odd. Marriott appears on the Fortune World’s Most Admired Top 50 All-Stars list at No. 29, and it tops the hotel industry rankings, just ahead of Hilton (HLT). Marriott ranks highly, in part, because of its ability to run a global operation. The company owns, manages, or franchises 4,400 hotels—brands that range from Courtyard by Marriott to the Ritz-Carlton. Despite its size, Marriott has been able to grow faster than its rivals. Its adjusted net income rose nearly 8% last year, compared with a less than 1% increase in profits at Hilton and an 8% drop at Hyatt, while Starwood’s earnings fell 9%.

“Fundamentally we are a strong, well-run company,” says Marriott CFO Leeny Oberg. “We demonstrated that through the business cycle.”

The Starwood deal soon will test Marriott’s management skills. Starwood has 1,300 properties, upping Marriott’s size by nearly 30%. And the company will have to not only integrate two global enterprises but also make them leaner. Starwood put itself up for sale in April of last year, and its stock rose to $87 but got relatively few bids. After shares slipped, Marriott offered to buy the company for $72 a share. Then came Anbang and the counter­bidding. Now Marriott’s bid values Starwood at $79.53, excluding nearly $6 per share that Starwood’s owners will get from a timeshare business, which is being spun off.

For more on this topic, check out “Why Marriott Is Losing Starwood to the Chinese.”

“The deal was a home run before the bidding battle,” says Lukas Hartwich, an analyst at Green Street Advisors. “Now it’s more like a single.”

The reason? Marriott may now be paying more for Starwood than its earnings justify. After the deal is done, ownership of the combined company will be split roughly 60-40 between Marriott shareholders and Starwood shareholders, respectively. If you split the projected cash flow for both companies this year 60-40 as well, $1.8 billion would go to Marriott shareholders, or roughly $100 million less than Marriott is supposed to earn on its own in 2016.

Marriott will pay Starwood shareholders $3.6 billion in cash in addition to the shares of the combined company they are getting in the deal. That will up Marriott’s annual interest payments by $130 million.

For more on Marriott, watch this Fortune video:

So it’s no surprise that Marriott is projecting $250 million in cost cuts to sell the deal. Oberg says the reductions will come from eliminating overlap in the two executive suites. That seems like a stretch. Starwood had $388 million in administrative costs last year, so Marriott would have to eliminate nearly two-thirds of those costs to hit its mark—and Starwood has been a lower-cost operation than Marriott.

“Management is bullish on the deal,” says Hartwich. “It’s interesting that the market is thinking differently.”

A version of this article appears in the May 1, 2016 issue of Fortune with the headline “A Deal That Almost Wasn’t.”